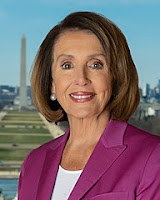 Speaker of the House Nancy Pelosi (official portrait; public domain) was born in Baltimore, Maryland on
March 26, 1940, birth hour unknown (RR: X). In such cases, it is typical to set up a natal horoscope using '12:00 pm' and when this is done, Speaker Pelosi's natal Mercury Rx is positioned @17Pis07 and natal Neptune Rx @23Vir49, in wide opposition.

Today I mention Mercury and Neptune, not because of Trump's vastly problematic square between his Mercury in Cancer and Neptune in Libra but because two transits now affect Speaker Pelosi's Mercury and Neptune and both denote periods when being vulnerable to deceit or deception are increased, even predictable: transit Neptune to natal Mercury (3x, third conjunction on or about February 2, 2020) and transit Jupiter square natal Neptune (3x, third square on or about November 3, 2019).

During such transits rational thinking may be hard to attain, grasping reality a concern or a goal, and sticking to an agenda can be difficult. Inspiration increases and high ideals may prosper, it's true, but given that she is in her seventies (as is Trump and other politicians holding on to the their power with all their considerable might!) it seems appropriate to keep an eye on such deceptive transits since the ideals and perceptions (true ones or false) of all politicians inform policies and laws which have major impact on us all. Plus, both Pelosi and Trump were born under the influence of Mercury-Neptune aspects, a similarity that suggests potentials for dreaminess, illusions, and deception--his internal (square), hers external (opposition).

Of course, a strong natal Saturn can mitigate such tendencies (as can other more realistic placements, plus, positive transits and progressions) and I'd trust Pelosi's Saturn in earthy, practical Taurus over Trump's Saturn in watery, emotionally defensive Cancer any day.

So since Speaker Pelosi's natal Mercury opposes her natal Neptune, she is in process of experiencing a generational transit of Neptune in Pisces opposing Neptune in Virgo. This transit may not affect her personally but if it does, some form of persecution may be vaguely felt as generational ideals are pitted against one another.

Sounds much like Speaker Pelosi's tussles (some say "widening gap"--very Neptunian) with AOC and the rest of the Congressional Progressive Caucus (CPC), doesn't it?