Please enlarge the following image to read the potentials of Inauguration 2021's Midpoint Pictures. Any, all, or none may apply at the time of the 2021 Oath of Office and may be subject to transits, progressions, and/or other activation; potentials are blends of Tyl, Ebertin, and Munkasey, and as you see, apex planets include: Sun (US natal POTUS; leadership; goals), Mars (males; the military; weapons), Uranus (radicals; reactionaries; zealots; the future), Saturn (authority; legal system; the Establishment; the status quo; limitations; the past), Pluto (power; extreme wealth; hidden hands; saboteurs), Jupiter (finances, banking, investment, wealthy, politics, religion, the General, corporatism; expansion), and Neptune (the media, the masses, propaganda, fraud, deception, disappointment, dissolution). The remaining planets are not apex but are parts of the planetary combinations themselves.

Notably, one planetary picture (Venus-Jupiter) prominently sits atop the Inauguration 2021 Horoscope Midheaven, the Goal Point ('MC'); three planetary midpoints conjunct the Sun, four conjunct Neptune, and two conjunct Jupiter; 12:00 pm est is a Solar Hour, the lunar phase is Crescent (88:10 = crisis in action), and with regret, I add that the chart's planets are in the Bundle shape of a 'dictator' such as Mussolini's (whose natal planets formed the Bundle shape) which suggests a more authoritarian 'presidency' than We The People have always been led to expect from Washington DC--even though we can 'feel' America's three-fer Pluto Return/s approaching in 2022: 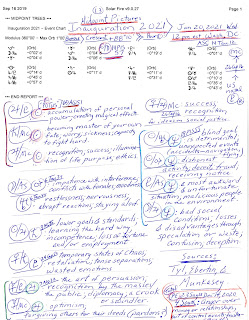 Now please note that the Inauguration 2021 Horoscope may not be a cosmic picture of a second presidential term for Donald Trump and yet you may agree that the 2021 Inaugural midpoint pictures suggest quite a mixed cosmic bag of negative and positive possibilities including: temporary or passing states of chaos, success and recognition, lowered standards and goals, magical effects, retaliation, impatience with interference, crooks and swindlers, and someone becoming the mistress or master of her or his own fate.

All this said under the assumption that America will continue to inaugurate presidents during this old order vs new order stage of societal dissolution and regeneration. Meanwhile, Pluto creeping through Saturn-ruled Capricorn, sign of government, law, and business, imposes his own destructive energies, doesn't he?

And so for authoritarian Trump this marks a period when transit Saturn (3AQ55; planet of authority and legalities) opposes his progressed Saturn (3Leo09 conjunct his progressed MC 5:40) and progress is difficult if not impossible to achieve--and transit Pluto @24Capricorn opposes his natal Saturn in Watery Cancer, sign of tribalism and nationalism, and suggesting titanic challenges to his personal authority and control. Hopefully! Is he vanquished yet? Well, perhaps the 'Images for Integration' for Inauguration 2021's Air-Fire Sun AQ-Moon Aries blend of cosmic energies might be of an uplifting nature:

"A court jester mocks the social injustices of the realm...Robin Hood and his band of merry men outwit the evil King John once again." (Sun Sign-Moon Sign, Charles and Suzi Harvey). On second thought, mocking and/or outwitting can play out for good or ill, so maybe not.

Note: if you find that any midpoint picture's potentials are difficult to read, leave a comment with this post and I will add its potentials in a reply. Printing the page might increase readability. jc

Also included on the above image in the lower right corner you see listed the 4 South Prenatal Solar Eclipse ('PE') of Inauguration 2021, the DC Horoscope for which may be viewed in a previous post here with eclipse theme and other astro-notes included.

Your fan and fellow astrologer. Found this September post when searching for astrologer comments on Inauguration 2021.

Due to Trump anxiety, I've been doing multiple charts on multiple candidates, including Trump, hoping to settle my mind. When it comes to the welfare of the Republic, I find myself in a state of fervently wishful thinking. As a result, even when I have good astrological reasons for my judgments, I still doubt my objectivity.

My most recent attempt to get astrological peace of mind was to study the relevant birth charts in relation to Inauguration 2021. In particular, I was seeking for prominent influence from Saturn, which is an indicator of solemn oaths and vows.

Interestingly, (and not that I’m a fan of Biden) but the Bi-Wheel of Biden Inauguration 2021 shows multiple Saturn aspects.

I hope that when the time is right, Stars over Washington will provide further comments on the indications of Inauguration Day 2021. It’s an interesting chart in any case, given the Mars-Uranus conjunction together with the Jupiter-Saturn conjunction.

Best wishes always, and thanks for your work.