Halloween 2019 Mercury Rx is King of the Fairies 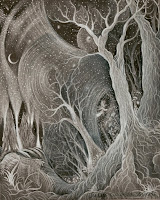 Rounding up Mercury's Halloween 2019 degree we have '28 Scorpio": "The King of the Fairies Approaching His Domain"; "Keyword: ALLEGIANCE--positive expression: a special competence of inward vision and a consequent outward perspective of high effectiveness; negative expression: capricious self-indulgence" (Jones). Is Trump "the king of the fairies"? Well, he seems to believe he's a king, as we know, and since bullies are always cowards at heart, some might say that his nibs is fairy-like.

And naturally, Mercury's 2019 path through Mars/Pluto-ruled Scorpio relates to current events and scandals in the news which include whistle blowers, memes, phone calls, transcripts, letters, meetings of various kinds, and testimonies--for Trump, in relation to the 4/10 security axis (Career and Home), and later, in relation to his natal 3/9 axis of lower and higher mind, plus, with dozens of legal battles thrown in and ongoing (9th house). And significantly, this Mercury station activates the very degree of the May 18, 2019 Scorpio Full Moon when May 18th Mercury conjoined the natal Midheaven ('MC') of Donald Trump so that enraged star Algol was also activated! Curiously, transit Mercury was also @25Taurus conjunct Trump's natal MC the day Don Jr, Kushner, and the rest of the conspirators met with the Kremlin lawyer in Trump Tower (June 9, 2016, if memory serves).

Now as you know, transit Mercury entered brooding, intense, big-business-oriented Scorpio during the first week of October 2019 and won't leave the Halloween-esque sign to enter Jupiter-ruled Sagittarius (a happier place) until approximately December 10, 2019. This means that Mercury and his/her magic wand will hit '30 Scorpio' on or about December 9th which is the "A Halloween Jester" degree containing a "contempt for established values" vibe (Jones). And of course we think of the new film Joker and expect that its popularity will remain in force since many people attend theatrical movies during the holidays. And isn't it timely how Trump's recent shout-out to China about investigating the Bidens was soon 'walked back' by Trump and his defenders as being only "a joke"? Even so, I suspect that the Chinese government was in on the joke, don't you?

Eclipse Note: in the October 31, 2019 chart of Mercury Rx, transit North Node @10Can19 in 7th house (Washington DC) points toward the 3 North Solar Eclipse of July 2, 2019 (10Can37) with 3N themes of 'worry, obsession, news that transforms a situation and/or involves young people', and with a caution 'not to get carried away with large plans' (Brady). Signs Cancer and Capricorn are intercepted in the Mercury Rx chart suggesting karmic conditions that need addressing, and of course eclipses are 'wild cards' of a disruptive Uranian nature which tend to contain a fated undertone as well. Late Sagittarius rises in the October 31st chart yet Capricorn holds the aligning Saturn (@15Cap24 conjunct the 2 South January 5, 2019 Solar Eclipse of 'joining unusual groups and gaining a great deal' of the 116th Congress), and Pluto at a critical degree (20Cap)--both rising with the separative South Node denoting difficult conditions for this Mercury Rx period. After all, Saturn, Pluto, and the Nodal axis are karmic as well (reaping what's been sown) so we can expect long-forming conditions to culminate soon in one way or another and with a sense of energy draining from situations and events (SN).

However, a bright spot appears in the Mercury Rx chart for there simpers the happy feelings pair of Moon conjunct Jupiter @23Sag+ rising in hidden 12th house near the natal Moon-SN conjunction (20--22Sag) of Donald Trump so his avoidance of facing his true condition and difficult predicament may continue awhile longer. But the three-fer exact conjunctions of transit Jupiter to his natal Moon conclude the first week of November, and significantly, the degree of Moon-Jupiter on Halloween 2019 pre-sages the upcoming 4 South Solar Eclipse @23Sag on December 4, 2020 with its difficult themes of 'blocked emotions, frustration over money and/or relationships, and potentially a sudden desire to end unions or alliances' (paraphrasing Brady's Predictive Astrology).

And so for now, let's wind down this fussy post with a quote from Reinhold Ebertin describing general potentials for Mercury in Scorpio:

"Sharp criticism, fanaticism, endurance and perseverance in the pursuit of difficult problems and in the solution of arduous tasks, practical ability. Sarcasm, skepticism, cunning and craft. Lively disputes, arguments, fights." (The Combination of Stellar Influences, R.E.).

Well, that's Halloween 2019 Mercury for us with its Scorpionic potentials which sound to me a lot like a day spent in or around the general vicinity of the fantasy world of Donald Trump.

Thank you Jude, for all your work. Great benefit for me.