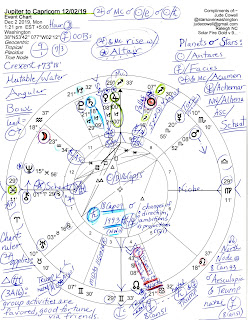 With 00Capricorn00:00 one of the four Cardinal World Points of manifestation, Jupiter's entry into the Saturn-ruled sign is a big deal which occurs approximately every twelve years. Here you see a DC Horoscope for the moment transit Jupiter reaches 00Capricorn00:00 on December 2, 2019 at 1:21 pm est--conjunct Midheaven ('MC'), the Career and Public Status Point, suggesting events occurring on the global stage, and in Washington DC since the cosmic shift happens at MC in our nation's capital.

Now if you're reading this you may already know all the roles that astrological Jupiter can play with politician, banker/trader, corporatist, guru or hierophant, broadcaster (propagandist), and military General being the primary ones who make cameo appearances on SO'W. And if you've visited here before, perhaps you know that when it comes to Jupiter, I tend to use the Great Benefic as the traditional ruler of Pisces as well as of Sagittarius, with Neptune as co-ruler or higher octave ruler of Pisces. (I refuse to divorce Saturn from the traditional ruler-ship of Aquarius but that's another fussy tale for another grumpy day.)

All that said, let's consider the December 2, 2019 Horoscope for its Jupiterian qualities, plus, for a few interesting cosmic factors and possibilities which may apply. The large-girthed Donald Trump is a Jupiterian for several reasons, one being his natal Jupiter in Libra at station and turning Direct 3 hours after his birth. Oh! that, and his greedy, materialistic nature exhibiting a love of money (the root of all evil--the love of it, not the money) so we have his nibs to consider as well. Actually, we tried this before with Donald Trump in the Realms of Jupiter. We've also previously discussed Trump's natal Mercury @8Can51 (conjunct Alhena: to have a mission) which is here on a future path via the North Node in 4th house. His apparent relocation to Florida may be part of this Mercury-NN picture although potential meetings, negotiations, and communications cannot be ruled out as well as contacts with reporters and/or with young people.

So in the DC Horoscope pictured above, basic chart factors are penned on if you don't mind enlarging the image to read my study notes. The energy shift of Jupiter, happy as a puppy with two tails in his own sign of Sagittarius, moving into sober Capricorn, sign of Jupiter's detriment due to his exaltation in Cancer, is supported via the Hour of the Moon (fluctuations, changes), plus as you see, the Aries Point rises along with star of misfortune Scheat and wounded/wounding Chiron Rx @1Ari29 following--Chiron, the blind spot, here conjunct US natal IC (Roots; Foundation) in America's late afternoon charts of July 4, 1776. (It seems to me that our country has certainly been undergoing a season of wounding as transit Chiron crosses and re-crosses our national IC--along with an opportunity for honestly dealing with our wounds and making karmic progress.)

Then on the chart, upper right, you see a list of planets that rise with stars on this particular day and there are quite a number of them including Sun, Venus (OOBs), Jupiter (and MC--both rising with Acumen), plus, Neptune, North Node ('NN'), and the Ascendant rising with difficult Scheat, as noted.

Thing is, the Ascendant, the What? Point of the chart @30Pisces, reveals an interesting Sabian Symbol: "The Great Stone Face" which speaks of destiny as character. Once upon a time I attempted an illustration of this symbol which may be viewed here if you wish, with Sabian Symbol details for '30 Pisces' included.

Now in closing, a few notes on how Jupiter relates in society when traversing the Saturn-ruled sign of Capricorn (a labyrinth unto itself!), sign of Jupiter's fall, as noted. Negatively, Jupiter in Capricorn suggests potentials for egotism, distrust, hypocrisy, and over-concern with the letter of the law rather than upholding its spirit. Yet when well-aspected, this placement tends to provide moral integrity, ethics in business and in general affairs, a sense of duty, and support for status quo traditions and/or for the prevailing value system. A conservative slant and positions of responsibility are indicated so those who hold them are the sorts of folk who may be cast in a bright spotlight while Jupiter is in Capricorn--basically until around Winter Solstice 2020 when Jupiter catches up with karmic Saturn @00AQ29, the US POTUS Sun degree, and the Jupiter-Saturn cycle begins again, lasting for approximately twenty years. As the 'flywheel of the Universe' keeping the planets in their courses via the natural law of expansion vs restriction, their conjunction times the genesis of a new order in society, and in Politics their combined energies express often as checks and balances and as our (alleged) two-party system.

As for the conjunction's synchronicity with US POTUS Sun (00AQ+ from our January 20th Inaugurations, the Presidential Oath of Office), a midpoint picture forms of Jupiter-Saturn = Sun: 'Taking destiny into one's own hands; major changes according to plan; or, if nothing has been prepared, becoming gripped by the status quo and having to make the best of things' (Tyl).

Now that sounds like a status quo we'd prefer to avoid.