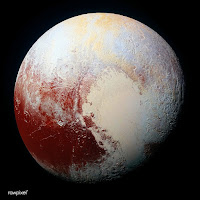 Hunting Pluto's Historical Past to Inform the Present

With America's first-ever Pluto Return/s coming in 2022, and in consideration of the duration of karmic Pluto's cycle of approximately 248 years, it has become an interest of mine to find the historical date/s of Pluto based on its January 12, 2020 degree. For as you know, this is the date of the next Saturn-Pluto Conjunction @22Cap46:34 through which current and upcoming political, financial, and social events will resonate, perhaps harshly or in a restrictive, compressed manner. Certainly, we know that hard work will be required.

In comparison, the last (and current until January 12, 2020) Saturn-Pluto Conjunction @27Lib36 was in 1982 under Reagan's presidency with his voo doo financial finaglings and slights of hand under which We The People have suffered these many years while the wealthy class has grown fatter and bossier. However, please note that in this post I'm looking at Pluto's position at the moment of the 2020 Saturn-Pluto Conjunction and not its US natal position in 1776 (Rx @27Cap32/33 in natal 2nd hou$e) although some historical overlap or similarities may be be noticed involving the years 1773--1776. And so the 2020 Conjunction times a Pluto Return to the 1773/1774 positions listed below and we may wonder: will history rhyme if not repeat? Well, the 2020 Pluto Return symbolizes a cosmic time link of karmic proportions, so we'll see, won't we?

Now when we sleuth for Pluto @22Cap46:34, we discover that the manipulating wealth-hoarder was lurking about during the years 1773 and 1774 and suggesting potentials for foreign agents, spying and intrigue, hidden wealth, and manipulation from abroad. Sounds familiar! Historical events of 1773 and 1774 show several interesting incidents, discoveries, activities, speeches, an essay, and legislation, some relating to the American Revolution and the First Continental Congress (May 28, 1774), some to scientific breakthroughs, and several having to do with the Boston Tea Party of December 16, 1773--plus, Britain's fussy reaction to it via King George III--and the Boston Massacre.

Another notable if quirky event was Benjamin Franklin's essay in the form of a letter, An Edict by the King of Prussia, in which our First Patriot writes under the guise of the King of Prussia, publishes the hoax of a letter in the Public Advertiser in September 1773, and thereby pointedly criticizes through satire the overreach of the British government toward our American Colonies. Curiously, under Trump the word "hoax" gets quite a work-out. The Prenatal Solar Eclipse ('PE') of Franklin's hoax letter manifested on September 16, 1773 @24Virgo00 in the 10 North Saros Series (10 North themes are listed in the center of the chart, below); this was a Total Eclipse and also serves as the PE of #3 on the following list.

Quick note: In his Encyclopedia of Astrology, Nicholas Devore gives '23 Capricorn' as a degree of governmental authority--and, 22Cap51 is the position of Trump's natal Vertex, a point of fated encounters and a potential for changing work conditions.

As for historical events of 1774, we find many stalemates and struggles between the status quo of the era's prevailing power structures and those who would grasp the freedom to wrest power and authority away for themselves. To me this sounds like an echo of Trump's and the global crime syndicate's coup of the US government and/or the attempt by the current power structure (The Establishment) to vanquish the gang of lawless usurpers and saboteurs. For now, let's say Pluto in Capricorn conjunct a governmental degree describes both sides' ongoing struggle for power and control in general. This is, it seems, a fated struggle of destiny. Different from the American Revolution--and yet somehow more similar than apathetic Americans wish to admit--they who have 'so much to lose'! Meanwhile, failing to fight for democracy is to lose. 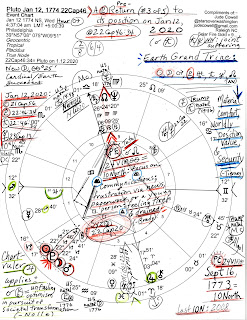 As usual, much info is penned on the horoscope (pardon!) intended for those who care to have a look and mention must be made of the massive Earth Grand Trine of Sun, Moon, Mars, Pluto, Uranus, Saturn, Neptune, and North Node of destiny ('NN') which suggests concerns with material comforts, worldly position, value, and perhaps above all given the dangerous times both then and now, security. The Capricorn line-up in 1774 is amazingly similar to that of January 12, 2020 (just add 2020 Mercury, subtract 1774 Mars) but since this is meant to be a post not a book, I'll leave this topic with you, dear reader, in case your own comparison of Pluto activity between 1773/1774 and 2020 is worth your time.

And as always, your on-topic comments, queries, and shares are very welcome! jc

Thank you John I very much value your opinion! jc

. i had looked into 22 degrees myself & noticed the central reserve , NYSE & various other financial institutions are hit at that degree (plus check out how the Saudi chart gets smashed) ... Its like the magical number & although the outer planet nodes move so so slow ...Pluto's nodes are currently 21° Capricorn 49' 02" ... I'm sure more 22 degrees stories will be revealed ..by the way i just love this blog !!

Thanks so much zeebling! Yes many entities, countries, and people are having two heavyweight karmic visitors to their 22/23 Capricorn placements and I wish I - we - had time to discover them all!! Jude

The Saturn Pluto conjunction at 22* Cap is right on the south nodes of both planets. This has never happened before. Also you have Neptune home in Pisces for mass migration, movements globally, truth exploding all over the place.
Saturn rules Democrats, Pluto is forcing the truth about them out. They can hide nothing. The party is being destroyed, they destroyed themselves.
Interesting Nov 3rd has Jupiter which rules Republicans joining the party. Sort of seems like an independent could win. But Trump is not really a Republican, he is Uranus Sun MC that is indy.
Trump wins, Dems lose house, Repubs keep Senate.