Today is Friday December 3, 2010 and we've entered the 3-day Dark of the Moon phase, the Balsamic phase prior to a New Moon when things go thump in the night and, in blackmailing Washington DC, there's no telling who lurks about undercover, seeking to cause damage to opponents while promoting the globalist governing agenda.

Here's an image of the Dec 5, 2010 New Moon horoscope set for the White House as a stand-in for America herself (click chart to enlarge): 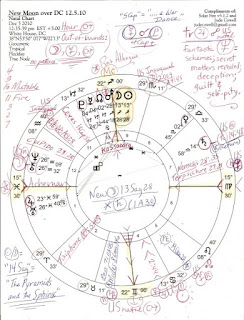 The 9th house New Moon sextiles Saturn 14Lib58 (in 7th house of Partners/Open Enemies); both Sun and Moon thus form a YOD pattern with Saturn pointing to '13-15Tau', the position each US Inauguration of the Oath of Office's Ascendant = the president.

Moon/Saturn = ASC: inhibited development; a reserved self-presentation; meeting with ill or depressed people; bereavement. (It's been announced this morning in the news that President Obama has made a surprise visit to our troops in Afghanistan, his second visit this year.)

Saturn conjoins US natal Saturn 14Lib48 so our national Saturn Return has arrived and will stretch and teach well into 2011; Saturn's necessary austerity after the banquet is in evidence.

Chart-ruler is Jupiter 23Pis59 rising in 1st house with Uranus 26Pis40 Rx; co-ruler Neptune 26AQ09 is posited in 12th house of Karma and Politics - and both still straddle US natal Moon (we-the-people) with dissolution (Neptune) and opportunities for spiritual progress (Chiron.) Jupiter makes only one applying aspect in the New Moon chart: its Great Conjunction with Uranus; co-ruler Neptune makes no applying aspect in this chart.

As you see, US natal Mars 21Gem23 is at IC, the HOW? Point or Foundation of any chart; critical/crisis degrees (29) are on the 2/8 axis (Money) and the 3/9 axis (Diplomacy; Education; Travel) and Venus 2Sco45 (valuations; relationships) stands out as ruler of the 8th house of Credit, Debt, Insurance, High Finance, Transformation, and Death) with its 29Lib33 cusp, so she's feeling frustrated with no outlet through the New Moon's Libra cusp yet that will soon change since the lady is now Direct and recrossing her earlier degrees prior to her Oct 8 Rx Station @ 13Sco40; in Scorpio, Venus is in detriment because Scorpio opposes Taurus, a sign ruled by comfort-loving Venus.

Yes, planet Venus will leave her own shadow once she clears 13Sco40 around Dec 21, 2010 in time for the difficult-for-finances-and-business Dec 21, 2010 Lunar Eclipse which is also in a critical 29th degree (Gemini); this probably relates in part to WikiLeaks and Julian Assange, the 'message-bearer' and 'thief' signified by speedy Mercury, ruler of the Dec 21 Lunar Eclipse.

The New Moon's Mars at MC here is apex planet in a powerful midpoint picture: Pluto/MC = Mars: great striving for attainment of power: the urge to dominate others; forced into an uncongenial occupation (the military, because you can't find a job? Ah, their globalist plan bears fruition! jc); crisis in career; explosively argumentative.

Now the propaganda duo, Mercury and Pluto, are in a karmic relationship since both are @ 4Cap12/24 which is where Pluto and North Node conjoined on November 9 (Plu/NN = meetings with the powerful and the shared destiny of the masses; both Pluto and NN are considered karmic or fated, and when we consider the possible midpoint pictures between the three of them, they all show a desire for intellectual dominance over other people, and promotion of a cause.

And at '5Cap', Mercury/Pluto = "Indians Rowing a Canoe and Dancing a War Dance" ties in with other 'war' indicators in this New Moon chart such as US natal Mars at IC, and Pisces rising in crisis mode. Of course, the US government now describes the recent Cablegate release of diplomatic 'cables' by WikiLeaks as 'an attack on America' and I'm certain that Washignton feels that way yet such labels must be used now in a pre-attempt to justify how they'll be treating Julian Assange in the future - if they can get hold of him.

Away from the earthly plane, there are three out-of-bounds planets: Moon, Mercury, and Mars; the public, Julian Assange, young people, and messengers of all sorts are indicated, along with Mars as police, military, and/or males between the ages of 25 to 35, give or take a year or so; some out-of-sync or out-of-tune vibes may be felt as the other actors (planets) in the New Moon chart get on with business.

And a large part of that business, I suspect, has to do with this horosocope's ruler, Jupiter (when set fo DC), for Jupiter is the General, the Banker, and the Judge...and transiting Jupiter here opposes US natal Neptune 22Vir25, a major transit for our nation on the financial level (especially since America's natal chart-ruler is moneybags Jupiter.)

Transit Jupiter opposing natal Neptune is a time of delusion, confusion, and deception when reality is difficult to pin down; Jupiter's increasing function adds to Neptune's billowing, deceptive, fraudulent qualities and its urge to merge knows no bounds; fantastic schemes are too good to be true so beware of those who over-promise; guilt and self-pity are used as excuses for overindulgence (Neptune = alcohol and other drugs), and confidential matters continue to be exposed under the influence of this transit.

(All midpoint pictures today are from Tyl and Ebertin; any, all, or none may apply.)

The Sabian Symbol for the Dec 5 New Moon rounded up is: '14Sag' = "The Pyramid and the Sphinx"...CERTIFICATION...pos: effective practicality through a gift for bringing real imagination to everyday living; neg/unconscious/shadow side: ridiculous efforts to fill the shoes of giants. (Marc Edmund Jones, The Sabian Symbols in Astrology.)

The Sun 13Sag28 (the leader ) rises with Fixed Star Antares (obsessed with success), Mercury with Sualocin (the playful dolphin, the artful dodger...Assange?), Saturn with fortunate Arcturus (a different approach), and dreadfully powerful Pluto, the dragon, saboteur, spy, assassin, and global puppet master, rises with Altair, the Eagle(bold exploration), one of America's stars, as is Arcturus. (Altair conjoins our Inaugural Sun 00AQ+ on January 20 at noon, Capitol Building, each time we inaugurate a new White House mouthpiece for the global banking system - and we 'got our money's worth' this time, in a manner of speaking.)

And since Pluto relates to the blood, I always tend to assume that Pluto in a mundane horoscope signifies a facet of the bloodline-monarchists of the Merovingian persuasion who think they deserve to continue ruling a world whose days are numbered, no matter which system of global control they attempt to set up in earthly Jerusalem!
Posted by Jude Cowell at 11:35 AM