Due to a date mishap where I'd heard in recent weeks that the 113th Congress would swear in on January 3, it turns out that their oaths will be taken on Friday Janaury 4, 2013 instead. Therefore, you may read the following post based on 'Janaury 3' or, you may wish to stay tuned for a new post concerning the 113th's January 4th horoscope. How much will change astrologically from one day to the next remains to be seen but of course some changes such as the Moon's position will be notable. Thanks! Jude

The image below shows the natal horoscope of the 113th Congress of the United States of America which opens on January 3, 2013 at noon est on Capitol Hill. Its Ascendant, the Congress itself, brings up the transiting Jupiter-Neptune (speculators, spendthrifts, wastrels, frausters, grand schemers, and the Grand Spirit) midpoint which gives a hint of the 113th's character though not all members may be thus described by the duo's negative tones (we hope):

Penned around the outside of the chart are America's natal placements from the 'Sibly' chart of July 4, 1776 5:10 pm LMT--as you see, Jupiter Rx @7Gem31 in 2nd house of the National Treasury will again conjoin US natal Uranus 8Gem55, as discussed in previous posts; North Node (NN 24Sco45) points to the 8th cusp and house of Shared Resources, Debt, Credit, Insurance, Legacies, Transformation, etc, and is ruled by the 8th H's natural rulers, forceful Mars and powerful Pluto: 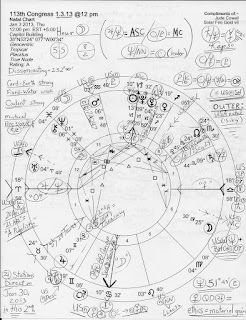 If the 113th gavela in on time at noon, it's an Hour of the Moon, suitable for changes and for newly elected congressmembers to take their seats, some of whom are women (Moon.) Publicity is involved as are security needs, real estate, and other realms associated with the astrological Moon including milk (Farm Bill? $8 milk?)

Here's a list of the 113th Congress' freshmen members.

As you see, there's another major midpt picture at Mc (Midheaven, The Goal Point of any chart) which has potential for:

Other midpt pics may be useful to consider though I shall not list them all in this post, then we'll look at the applying aspects of chart-ruler Mars (conflict; action; energy; warring factions, etc, to see how things may proceed for the country under the sway of the 113th Congress--note that Mars @6AQ48 conjoins US natal SN, a Saturnian point of separation and of past behaviors.

Challenger Mars is also the planet apex of 4 midpts: Pluto/Chiron (with its oppressive plutocracy and disenfranchisement vibes), Sun-Neptune, Neptune/Mc, and NN/ASC, detailed below) to see how things may proceed for the country under the sway of the 113th Congress and whatever secret austerity plans the radical Utopians (Uranus in Aries) will continue attempting to force upon us.

NN/ASC = Mars: working for the common good (!!! now that would be a vast improvement over the radicals obstructing the 112th! jc)

I know of no easy words to describe Pluto-Chiron = Mars though with America's SN involved, I suspect that past bad behaviors such as oppression, win-at-any-cost attitudes, and even primal violence will continue to be exhibited by the corrupt Washington politicians and the plutocrats who support them infest the District of Columbia and continue their plan to completely take over the US government and weaken it while ravaging all resources of our nation.

Let us hope progressives and populists are up to fighting the battle though I must add the Saturn-Neptune = Mercury implications of depression and pessimism, a factor affecting all who are signified by planet Mercury (including young people, students, traders, and deal-makers. Sadly, the combo of Saturn-Neptune relates to 'secret government' but also to grief and sorrow.)

1. Mars trine Jupiter Rx (0A43) which on one level describes the pay raises (2nd H) that President Obama has ordered for the 113th Congress and for other federal employees who've had pay freezes in place (Rx Jupiter.) Hope our congressmembers turn out to deserve such financial encouragement and that they'll do the people's business better than the unproductive 112th did!

2. Mars square Saturn (2A56), which denotes that activist Mars will run into frustrating obstacles, hard work, and delays brought on by lack of preparation and/or bad timing. The seniority and authority of others may be challenged or threatened which will be met unkindly, and trying to get around rules and regulations is to be avoided (word to the wise!) Why, even physical threats may be received. Necessary items may go missing when sought though they will probably turn up later.

Yes, Mars SQ Saturn shows that the old dictum experience is the best teacher fully applies to the whippersnappers of the 113th Congress. But of course, with the GOP's past behavior with its sour grapes-sore loser attitude, we must expect to see filibusters and other obstructive tactics meant to block any legislation that might make President Obama 'look good'.

Well, these are my brief astro-notes concerning the 113th Congress though many other chart factors will be of interest as the congressional session grinds along. My plan is to direct you back to this natal horoscope when major transits or events occur so perhaps you'll find the chart useful as you consider the madness and mischief of the US House and Senate circa 2013 and beyond.

The only horoscope I have in my files for the natal chart of the US Congress is an old one and I suspect that I only surmised the hour since things tended to get started at an early hour in the olden candle-lit days:

US Congress: November 17, 1800 '9:30 am' LMT with Sun 25Sco04 (the above NN and 8th cusp conjoins natal Sun! NN to Sun = new contacts are made--or, sworn in!) and Moon 6Sag17, a steamy Water-Fire combo of passion, commitment, self-dramatization, fanaticism, and intellectual discernment.

Synchronistically, natal NN @17Ari59 conjoins the ASC of the 113th Congress, and natal Jupiter @4Leo26 = US natal NN; plus, natal Uranus @00Lib47, a World Point of Manifestation, conjoins US Midheaven in our 'Sibly' natal chart and with tr Uranus in Aries since 2010, Congress has been in the midst of its Midlife Crisis, a time when one tends to behave uncharacteristically!

Of great concern is Congress' natal Pluto @2Pis16 (transformation, manipulation, power, control, and wealth) which is now being dissolved by tr Neptune in early Pisces, a time when the current system can be removed, traditional rules are changed, treachery is afoot, and power is eroded; a resort to poison isn't out of the question, though negative societal trends may be mitigated somewhat by the current behavior and attitudes of those directly involved and challenged--here, the 113th Congress!