After Spring Equinox 2013 arrives, the Cosmos has a Scorpio Lunar Eclipse in store for us (secrets and leaks continue to be revealed?), and on May 9, 2013, a Solar Eclipse @19Tau31 manifests during a Moon Hour of changes and fluctuations. Here's a horoscope of the May Solar Eclipse set for the White House (as a representative of the United States of America): 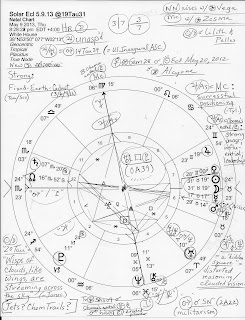 Chart shown: May 9, 2013 8:28:23 pm EDT White House, Washington DC. Ascendant 24Sco23, MC 6Vir15 (conjunct President Obama's natal Pluto), and with unstable, gaseous Neptune @5Pis09 at IC, conjunct the president's 1st house natal Chiron (5Pis19 Rx), and opposing his natal Pluto which indicates erosion (Neptune) of power and control (Pluto)--unless his wealthy backers support him as president in spite of it. With transiting Pluto now opposing US natal Sun (the president), I'm not certain they will, are you? For huge power struggles ensue...

Please click to enlarge the image and perhaps read a few basic notes with the eclipse taking place in the Cadent (preparation) 6th house of Service (Military, Police, etc), Work, and Health in Washington. Venus @00Gem28 in 7th house of Partnerships conjoins the degree of the difficult Solar Eclipse of May 20, 2012 which triggered Fixed Star Alcyone in the Pleiades constellation with its something to cry about and/or exile themes. Multiplicity and duplicity are characteristics of the dual sign Gemini, as you know, and an unaspected Jupiter @19Gem23 approaches US natal Mars @22Gem, planet of war, strife, and contention though it is often a fortunate transit for Jupiterian luck may favor Mars' physical endeavors.

Yes, the May 20, 2012 eclipse related and relates to the ongoing, reckless economic and budgetary stalemates now playing in our Capitol Hill Theater and which are damaging our nation's standing in the world along with Mr. Obama's presidency and the US economy with it. Odd really, since the Republican Party has always given much lip service to how 'strong' our nation must be perceived abroad. Yet sometimes since 2009, it feels as if the GOP is inviting attacks by staging their intransigent, provocative behavior. And the secessionist vibe? "A house divided cannot stand." But apparently that's what some entities want so that a full coup may be established in Washington DC.

Well, with the May 9, 2013 Solar Eclipse in the 15 South Saros Series, we may expect financial dramas to continue for Taurus is a money sign, ruled by evaluating Venus, as shown so obviously by the sculpture of the Taurean Bull on Wall Street. (Yet I still get the creepy feeling that the secret-ritual Cult of Mithras is lurking within our financial and governmental shadows! Click and scroll down to see a bas-relief of 'Mithras as Atlas'!)

Astro-Note: in 1776, US natal Pluto began @27Cap33 Rx and has now progressed to 29Cap+; along the way Mr. Invisible Power crossed '28Cap', a degree which *Adriano Carelli gives as "Atlas Carrying the World on His Back" which brings up Sen. Paul Ryan's favorite obstructionist and survival-of-the-fittest idol Ayn Rand because of her book Atlas Shrugged in which wealthy, pouty corporatists take their financial marbles and beat a hasty retreat from their ungrateful victims. There are no coincidences and apparently US stock-dumping has been going on for while now.

Release of tension as a lingering situation will suddenly clear but with a sense of loss or grief that is more collective or group-related than personal (paraphrasing Brady's Predictive Astrology.)

Chart-rulers of the Scorpio Ascendant you see above are Mars and sub-ruler Pluto but all we can surmise from their applying Ptolemaic (major) aspects (since Mars applies only to conjunction with the SN = war, violence, or a stepping aside from them) is a spotlight on the Uranus-Pluto square (0A39) in Cardinal (initiating action) signs from the 2nd house of the National Treasury, Values, and Earning Ability to radical Uranus @10Ari44 in the 5th house of Risk-Taking, Gambling, Speculation, Creative Pursuits, and Children.

Thus, the Uranus-Pluto square of titanic generational clashes may gobble up the May 2013 Solar Eclipse cake, or at least the crumbs left over by an unaspected Jupiter which, as such, works in a one-pointed, intense manner--"all or nothing" is a good phrase for an unaspected planet, and here moneybags Jupiter in Gemini, sign of trade, commerce, transport, and communication, insists on providing growth and investment in our country although at the moment, he is not tied in with the energies (planets) of the May 9th eclipse horoscope. However, this Jupiter can be highly influential when he acts and this may denote what the president is able do toward investment without interference from the obstructive input of Congress. Or, perhaps the GOP will finally get wise to itself and cooperate for the good of our nation!

Now Uranus is the catalyst or apex planet of two midpoint pictures:

Mars-Neptune = Uranus: reaching for 'pie in the sky'; energetically following the dream.

Plus, one picture is angular at Midheaven (The Goal Point) where it may manifest, and its combined energies also affect President Obama's natal Pluto in Virgo:

Jupiter-ASC = MC: successful positioning; being in the right place at the right time.

The Sun and Moon are involved in pictures, too:

Other midpoint pictures appear as well and include the 'lucky break' pair, Jupiter-Uranus:

And since Mars @14Tau29 conjoins US Inaugural Ascendant (the Office of the Presidency) on January 20th at noon, Capitol Building, we have:

Well, I like that last one as long as the American people are included in the Jupiterian festivities. So maybe I'd better stop typing on that fortunate note!

Other topics in the news include threats from North Korea; here's a previous post: Astro-Notes on North Korea's Natal Chart.

*Adriano Carelli, The 360 Degrees of the Zodiac.

Today's midpoint pictures from Noel Tyl, Solar Arcs; as always, any, all, or none may apply.