Columbus Day 2015 and a Discovery of America Horoscope

In Manly P. Hall's book A Secret Destiny for America we find chapter 8: A New Identity for Christopher Columbus in which astrologer-occultist Hall provides what is said by early historians and State documents to be Christopher Columbus' true name, Prince Nikolaos Ypsilantis, from the Greek island of Chios. Follow the link to read chapter 8 for yourself.

And here's my silly verse dedicated to Prince Nikolaos though I was unaware of that identity when I posted Ode to Christopher Columbus. Or that this Plato admirer kept two sets of ship's logs on the voyage which made landfall on October 12, 1492 in the West Indies. Hall says his voyage was a disguised journey actually intended to discover the Lost Continent of Atlantis! Well, myth it may be yet finding 'Atlantis' as his mission tallies with the Founding Fathers as secret society members (most if not all of them) and their determination to implement the creation on this continent of a New World to replace old worn-out Europe--a new land based on Enlightenment principles of Equality, Freedom, and Reason--not religion. (Sorry Christian Fundamentalists--America was where settlers came to escape from the persecution of religious fanatics, remember?)

And of course you know the Enlightenment planets are electrical genius Uranus and visionary mystic Neptune which conjoined once again (a 171-year cycle) three times in 1993 around 18 Capricorn--the POLITICAL POWER degree in Sabian Symbols--just as I'm certain you know that Thomas Jefferson hung portraits of his favorite old masters (mentors!) at Monticello, an homage to Francis Bacon, Isaac Newton, and John Locke whom he called his, "trinity of the three greatest men the world has ever produced."

If you're curious, this post displays the Horoscope of the American Revolution ('the shot heard round the world') and notes concerning Who's Who within its Hidden Dynamic. Familiar names will be found!

Lights, Enlightenment, and Infiltration! Here's an excerpt from Bush's 1989 Inaugural Address which should have seemed more ominous than it did at the time--well, to some of us, it did:

Related, a post from 2012: Another Pope Calling for World Government and a 'New World Order' because you see, the realms of religion, government, and finances are all in on the chess game, the so-called Great Plan of Lucifer (Venus) that Francis Bacon and others have insidiously championed since ancient times. But these days, the 'hidden hand' and its infiltrating network of agents, saboteurs, operatives, media shills, and political hacks have become much more open about it.

Astrology of the Discovery of America

The following horoscope of the discovery event is based on information found here and though the actual place of his stepping ashore remains in question I shall set the chart for the "early morning of October 12, 1492" for a spot as close as my software gets me. Actually, Watling Island is said to be the present-day location of San Salvadore ('Holy Savior') which is what Columbus named the island that its inhabitants called Guanahani. The place is controversial so in lieu of a definite location I'm setting the chart for somewhere 'in the neighborhood', Great Guana Cay, Bahamas: 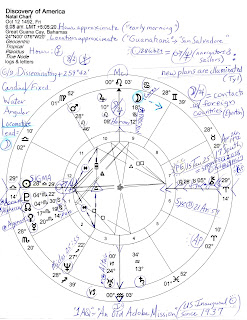 Please enlarge the chart to read my scribbles for I shall not type out all my notes for you here.

Hour of Venus (Rx @17Sco19 and rising in 1st house as chart-ruler unless you prefer a Scorpio Ascendant which would make Mars the chart and landfall ruler but Mars does not apply to a planet and Venus applies to a square with Saturn in Aquarius.) You note that Pluto and North Node are conjoined @4Sco22/30 and rising which denotes powerful encounters which had to be the case for any adventurers when landing on native shores. Plus, Pluto-NN is the 'tiger by the tail' duo and there seems to have been a mysterious man on board who may be represented by a caped and invisible Pluto in secretive Scorpio and acting as a representative of the 'hidden hand' directing the New World mission.

As you see, '6:08 am LMT' is just after local sunrise with the Sun @28Lib29 conjunct Sigma, a letter in the Greek alphabet which in Astrology denotes karma (reaping what's been sown.) Seems it was the karma of navigator Columbus (or whatever his true name was!) to sail in what is now our general direction and step upon these shores and here we find exploring Jupiter of broadened vistas and boundary crossing fame in proud Leo and nearing a Sun-ruled Midheaven. Curiously, the combo of Jupiter and Uranus work well together for fortune hunting and for discovering novel territories. Here they are locked in an obsessive-compulsive quindecile aspect (165 degr) denoting risk-takers who seek new ways of benefiting mankind and promoting equality for all! (Reeves.) To me, 'New World America' fits snugly within this description along with the obsessive idea of Bacon, Gosnold, Weishaupt, the Founding Fathers, and others who knew of this continent and a Great Plan to colonize it long before we've been traditionally taught that they knew.

Now brief mention must be made of a certain midpoint picture--the Sun (leader) at the apex of Mars-Neptune (navigators; sailors; mariners) indicating 'new plans' being 'illuminated' (for me an Enlightenment reference) as given by Noel Tyl who also mentions 'situational changes' for the Mars-Neptune = Sun trio. There was much grumbling from the ship's crew if I understand correctly and landfall must have warranted quite a few "Thank Goodnesses" from all concerned. That Venus is prominent hints at treasure hunting for valuable things (Rx = another attempt?) and the 29th degree Ascendant (my choice) adds to the imperative to arrive Now before the crew mutinied! The chart reveals a success-driven Locomotive pattern with the fluctuating Moon in her own sea-going sign of Cancer leading the planetary throng of mariners. Did ocean waves determine their exact landing spot? You tell me!

Several planetary connections to Fixed Stars are notated as you see, and obviously there are many more chart factors of interest to consider but I've only just begun to experiment with this horoscope for America. So far progressions issuing from it and its Solar Return on Monday (Oct 12, 2015) are intriguing along with its Pre-Natal Solar Eclipse Saros Series (PE), the 17 South @15Tau25 which recently manifested during Spring Equinox 2015 @29Pis27 (conjunct the Aries Point of Prominence and Fame--very famous is Christopher C.)

However, for Columbus and his crew a second solar eclipse influenced their endeavors for only 9 days later an eclipse manifested @7Sco30 in the midst of the Pluto-NN-Venus-Mercury group you see here at landfall within the 2-week time frame of the event. It was in the 18 North series--the very series we're in now! for it occurred on September 13, 2015 @20Vir10. And no, I had no idea of this cosmic resonance prior to setting up this chart earlier today. I simply felt impelled to study and post it in honor of Columbus Day 2015, the 523rd anniversary of the Discovery of America.

Blog Note: Links to previous posts, horoscopes, and themes of the 17 South and 18 North Solar Eclipses may be located by typing 'Eclipses' into the sidebar Search field if you wish. If so, just scroll in a downward direction while pondering how similar the name 'Ypsilantis' is to 'Atlantis'.