Below is the DC Horoscope of the New Moon that perfects on November 29, 2016 @7Sag42 at 7:18:10 am est. As you see, rising in Washington is 9Sag09 which brings up the New Moon and also a turbulent star, royal Antares, which when active tends toward war, violence, fires, quarrels, suspicion, legal problems, and/or riches but sudden loss (Horary Astrology Plain and Simple, A. Louis). This reminds me of the disturbing Mars-Saturn conjunction which joined Antares on August 24, 2016 @9Sag52: 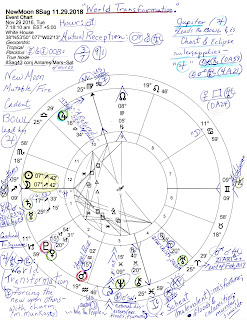 Please enlarge the chart to read my notes.

On a political level, the destructive energy of Mars combined with Saturn suggests potentials for: military power and continuing action, interference with or by criminal elements, ambitiously taking what belongs to another, 'an older enterprise that becomes angered', and/or 'demands to halt armaments' (paraphrasing Munkasey's Midpoints: Unleashing the Power of the Planets). Notably, Mars-Saturn is sometimes called 'the death axis' and relates to health issues, stalemates, and failure.

When rising as it is here, a midpoint picture is formed which Ebertin gives as:

So is there a Mars-Saturn imprint upon the psyche of president-select Donald Trump? Unfortunately for America, there is. It's Mars-Saturn = Pluto: brutality; the rage or fury of destruction; intervening of a higher power; bodily harm or injury; murder, death of many people. Mr. Trump was born under the influence of this midpoint picture yet let's not slip into a review of his life story to see if its enraged energies have expressed before. (Criminal elements in his past are enough to satisfy such potentials, and not being a gambler myself, I believe Trump's gambling casino businesses alone are enough to identify Underworld criminal tendencies or associations but please feel free to disagree).

Now as you know, Pluto (in partnership with Neptune in particular) represents many things and among them is the criminal Underworld, or 'mafia', and, besides gambling, drug and sex trafficking. Descriptively, the New Moon chart (lower left) reveals another midpoint picture with Pluto again as apex planet of the Jupiter-Uranus opposition forming a dynamic T-Square:

Jupiter-Uranus = Pluto: a sudden change in financial conditions (Ebertin); extreme efforts to produce novel changes; extreme reworking of ideas to ensure they work properly and will be received correctly; devices with the potential to transform the world (which is why the New Moon horoscope is entitled, World Transformation). Can one little New Moon act as a marker for world transformation? Yes, actually it can. Because New Moons are capable of 'wild card' influences in similar Uranian fashion that is often seen with a Solar Eclipse just as a Full Moon can affect us much as a Lunar Eclipse can do.

Well, quirky maverick Mr. Trump is not only an unpredictable Uranian (Uranus in deal-making Gemini leads all the planets in his natal chart) but he is also a Plutonian as we've previously discussed--a Plutonian with an Unaspected Pluto in Sun-ruled Leo, with Pluto's powerful qualities unmoderated by his other natal planets.

Now, one week after the General Election of 2016, I must wonder if Trump voters and supporters really want a Ku Klux Klan White House for that is what they voted for on November 8th when they thought they were voting for 'hero' Trump's magical job-creating campaign promises. Tragically for America and the world, the word suckas can hardly cover such thoughtless gullibility.