Horoscopes: Inaugurations 1993 and 2017 with their Sun-Moon Blends

In case anyone cares to review the horoscope of Bill Clinton's 1993 Inauguration, here it is with notes scribbled on the chart. Please enlarge for reading: 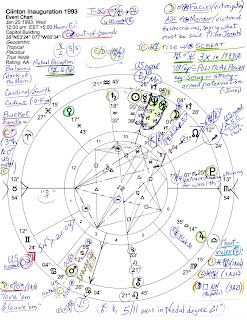 And for comparison, here is the Inauguration 2017 horoscope which could turn out to be a total Clinton-plus-Clinton affair--but how I dread the incessant yapping at her heels and obstructionism by a sore-loser GOP, evn though I know it's only Political Theater designed and directed by shadowy manipulators hiding behind the curtain: 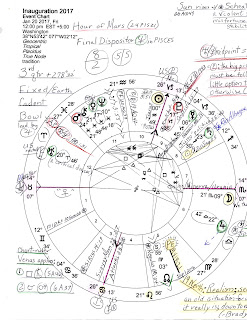 And here are the Images for Integration for both presidential terms. Sun = conscious, Moon = unconscious; Sun-Moon midpoint = marriage partners, so the Sun-Moon blends of both inaugural charts closely apply to our wealth-accruing political couple, the Clintons:

2017: Sun AQ-Moon Scorpio: "A scientist dissects a scorpion with great tenderness and absolute precision...A researcher presents his findings to his (or her) colleagues at a Science for Humanity conference...Jules Verne's 20,000 Leagues Under the Sea."

I shall leave it for you to decide how the 1993 Images apply to the first Clinton presidential term amidst government corruption, violence, so-called 'trade' deals, and his gutting reforms of New Deal programs (ex: Welfare), a goal which some say Hillary as president would continue until Social Security is privatized on behalf of Wall Street hedge fund managers who've just got to get their greedy claws on those trillions of SS dollars! One note tough--you see the Uranus-Neptune conjunction in governmental Capricorn which perfected three times in 1993 and signifies the so-called 'New World Order' which is what a Hillary presidency would, above all, continue implementing and we see this via 2017 Pluto now conjoining the 1993 position of Uranus-Neptune with its telling midpoint picture: the big picture demands a certain course of action, very little option to do otherwise (Tyl).

So with the 2017 Images and inaugural Moon in Scorpio, it seems that Hillary Clinton's Sun, Mercury, South Node, (and Ascendant if you prefer her Scorpio Rising birth time) is featured, plus, the second Image may relate to climate change issues and/or other scientific realms of research, oceanic and otherwise.

Now here's President Obama's Weekly Address of August 13, 2010 concerning the super-dumb, reckless, and corrupting idea (my description!) of privatizing Social Security--or at least, this is what POTUS said then (though in 2016 and beyond, Hillary Clinton doesn't seem to agree):

For more details on Sun-Moon blends and their word pictures (i.e. "Images for Integration"), see Sun Sign-Moon Sign by Charles and Suzi Harvey.