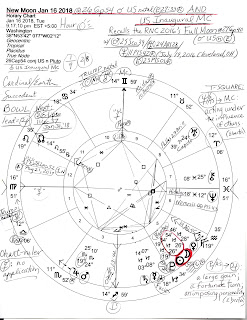 Image: New Moon @26Cap54 January 16, 2018 9:17:10 pm est Washington DC; Hour of the Sun; New Moon conjoins US natal Pluto Rx @27Cap33 and US Inauguration MC. This lunation recalls the RNC 2016 Full Moon @27Cap40 of July 19, Cleveland, Ohio which seemed particularly significant due to its conjunction with America's natal Pluto and the POTUS Inauguration MC, the Goal Point. Pluto in Capricorn there denotes that the goal is dictatorship (Ebertin).

Penned upon the chart are basic details (please enlarge) along with the RNC July 19, 2016 planets that are here conjoined (2018 to 2016) as if in a Return chart or very near it: Mars, Uranus, Neptune, and centaur Chiron, with Uranus and Chiron (as a pair, the chaos creators) on their exact July 2016 degrees. This suggests a sort of time link with history rhyming, folks, as the Trump regime and the GOP control of the three branches of government continue, at least until the November Midterms.

Also significant during this time of confusion, falsehood, unreliability, paranoia, propaganda, fear, disappointment, delusion, dissolution, and contagion is the fact that the American people are mired within a five-fer Neptune Return of the Republican Party (14Pis01) which began in 2017 and lasts through the end of 2018 into 2019.

So as you see, Jupiter leads a BOWL shape of the New Moon planets but from what is traditionally known as an 'evil degree' (19Scorpio) which Nicholas Devore has called "the crucial point in the war between the Ego and the Supreme Will." And I have little doubt that since it's expansive Jupiter there, issues of banking, financing, funding, budgets, debt, military spending and troop movements (Jupiter the General), and guns vs butter are some of the things described here with funding stalemates in Congress and a potential government shutdown looming (as I type on January 8th) at midnight on January 19th. Will ego be the prime consideration in these important matters in Washington DC 2018? Can politicians get out of their own ways long enough to 'do the people's business'?

For clues, perhaps we should note the T-Square with apex Jupiter penned, lower right. It says: Pluto-ASC = Jupiter: a large gain; a fortunate turn; an imposing personality (Ebertin) which these days tends to signify Mr. Trump. Another midpoint picture is Neptune-ASC = MC: acting under the influence of others. Well, hello! Lobbyists, big donors, and/or ALEC bill writers, perhaps? Trump's influence over Republican lawmakers? Well, most Americans agree that a majority of 'our' congress members are compromised by such influences and seldom if ever vote their consciences. Or what's left of them for the ones who had consciences to begin with. Gutting social welfare programs would seem to indicate a dearth of Christian charity operating in DC, imho.

So! What new beginning is suggested by the January 2018 New Moon conjunct US natal Pluto and the Inaugural Midheaven? Is it merely a cosmic signature of a new year starting or is there more to it? What seeds are being planted now that will sprout under the eerie light of the January 31, 2018 Leo Lunar Eclipse?

Well, we know that with manipulative yet coping Pluto in the lunar spotlight this month we can expect issues of power, control, and great wealth to be on the menu with Jupiter in Scorpio, sign of Big Business, spying, and betrayal, leading the march--and speculator Donald Trump's Neptune in Libra is first of his natal planets to rise in the New Moon chart and bringing his Chiron and Jupiter to the party. Can warmongering and profiteering be far behind? Are certain foreign agents such as Putin involved in the lunar-plutonian picture? Is Pluto's nuclear button safe from Trump's twitchy little finger?

And yet the 2016-2018 time link suggests that there are fresh potentials for new leaks, scandals, and/or secrets concerning Mr. Trump's campaign 2016, his GOP nomination, and his subsequent selection to play president perking within the darkness of the January New Moon and may be revealed by the light of the January 31 Lunar Eclipse @11Leo37 which manifests so near Mr. Trump's natal Pluto!