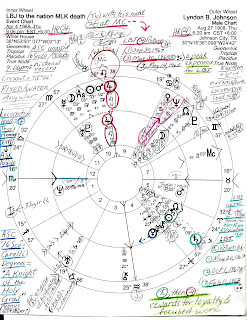 April 4, 2018: upon the occasion of the 50th anniversary of Dr. King's death, here is a bi-wheel of two horoscopes. Center is a chart set for April 4, 1968 9:06 pm ET White House (timed via historical record) when President Johnson ('LBJ') addressed the nation on TV upon the evening of the Martin Luther King assassination. Outer is the natal horoscope of LBJ (August 27, 1908 6:20 am CST Johnson City, Texas) which shows his natal Jupiter @26Leo34 in process of a three-fer Jupiter Return and topping the Midheaven, the Goal Point, at the moment of his address to the nation. As you know, expansive Jupiter returns to natal degree approximately every 12 years and tends to bring rewards (see note in green, lower right).

Also added is the Carelli Degree for the Ascendant (the address itself): '16Scorpio' (Carelli does not round up) = "A knight of the Holy Grail" which suggests secret society involvement and those of a Venus worshiping persuasion. As you see on April 4, 1968, transit Venus in sacrificial Pisces was leading all the planets in a ruthless Locomotive pattern. LBJ's natal Uranus Rx @13Cap12 was his first planet to rise as he spoke tat night and was leader of his own Locomotive pattern--and opposed US natal Sun and goddess star Sirius (The Scorcher).

Both horoscopes--the 1968 address and LBJ's birth chart--occurred during Jupiter Hours and if you can read my notes penned on the charts you can see the dates of LBJ's Saturn Return 1967/1968 (another three-fer) and his Jupiter Return dates ranging from 1967 to 1968. Other chart notes are penned on as well and I hope you can read them. Violent measures and shocks (1968 Mars-Pluto = US natal Sun, the leader) are part of this picture but today I shall not expand upon such tragic themes committed against Dr. King, his family and associates, and against the American people other than to point you toward LBJ's 1968 address planets as transits to his natal horoscope.