NYSE Created by a Wall Street Handshake; Trump Aims at Amazon and Bezos

April 5, 2018: Thanks to the Buttonwood Agreement on the morning of May 17, 1792, 24 stock brokers and merchants formed what we now 'lovingly' call the New York Stock Exchange (NYSE) and what I tend to call the Wall Street Casino (you take your chances and the game is rigged). However, this was not the first American stock exchange for the Philadelphia Stock Exchange had formed two years prior. 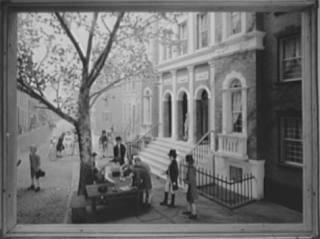 The Handshake: By Gottscho-Schleisner, Inc. [Public domain], via Wikimedia Commons

This week with Mercury retrograde until April 15, 2018, I've been culling through charts, notebooks, and scribbled notes in an attempt to create order out of my own personal chaos and have just discovered a decrepit little notebook that includes the founding data of the Buttonwood Agreement including the time: 7:52 am. This May 17, 1792 horoscope had been in my files for years until it and hundreds of other astrology charts were lost in a pc crash a few years ago. Since then I have been using a NYSE chart set for May 11, 1869, the after-war Re-oranization horoscope so I'm glad to add the 1792 horoscope back to my files. Unfortunately, I have no record of how the hour was ascertained (historical record perhaps?) but here's the chart for future reference: 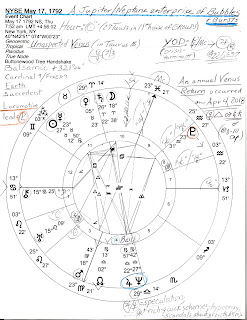 Previous posts on such topics include: wealth-hoarder Pluto's upcoming shift as Astrologer Warns of Pluto Crossing October 31, 2018 and Natal YOD of the NYSE activated by Trading Halt which occurred on July 8, 2015 for 3 hours 32 minutes. Post details include a YOD crisis pattern which may, or may not as it turns out, point toward restrictive, law-abiding Saturn. If not, or if I explained chart factors badly, it's a mea culpa.

However, the Buttonwood natal chart of 1792 seen above does contain a crisis-turning-point-special-task YOD pattern of sorts involving Mercury-MC = Jupiter Rx with suggestions of recognition, publicity, success, good fortune, and an optimistic outlook, a phrase we've occasionally heard applied to the stock market through the years. And since moneybags Jupiter conjoins fraudulent dreamer Neptune in the 1792 chart (in Venus-ruled Libra) we may wish to include Neptune as apex of Mercury-MC as well with its varying tendencies toward fantastic notions, disappointments, a 'can't lose' position, lax or self-deceptive practices, and/or confused judgments (Ebertin-Munkasey-Tyl midpoint pictures combined).

Also note that 1792 Venus, ruler of evaluations, valuables, and small amounts of money, recently returned to her natal degree of 5Tau23 on April 4, 2018 beginning a new cycle of Venusian activities. In the Venus Return 2018 chart, Venus trines the current (now separating) Mars-Saturn conjunction which perfected @8Cap57 on April 2, 2018.

Trump Tanks Stock Market 2018 Messes with Amazon: Just Like Putin Would Do!

If only Russia's Vladimir Putin had an operative inside the US to do his bidding! Someone highly positioned inside the US government so that Nikita Khrushchev's prognostication in 1956 that Russia would one day "bury" America because history was on Russia's side could come true!

Plus, Putin may harbor more than a little sense of 'payback' due to his humiliation at the Disintegration of the Soviet Union on December 25, 1991 when the hammer (Mars) and sickle (Saturn) flag over the Kremlin was lowered for the last time. Last time? Promise? Well, given Trump's idolatry of Putin and Donnie's preference for dictator-style governing, I'm not convinced the Soviet Union flag won't fly again, are you? Perhaps over the White House with Trump the Tool in charge--or dismissed? Thing is, revenge is sweet for some like Trump and Putin and in 1991 the US should not have chortled over the demise of the Soviet Union into 15 separate countries as being proof of a "triumph of democracy over totalitarianism" and "capitalism over socialism." It's always a bad idea to poke The Bear and we see totalitarian governments now rising all over the globe as Earth heats up. The same correlation has occurred in the past and history does tend to rhyme, on one side's particular side or the other.

Also it's doubtful that global leaders of the transnational variety intend for America to be leader of their next 'new world order' when it's fully implemented. Some say the leadership role will be China's or Russia's, or on an alternating basis but without the US whose 'new order' reign was always intended to last from 1776 to 2025 or so. Perhaps we need to ask high-level Freemasons about that little rumor--not that they would spill those particular beans before they're fully boiled. Anyway, the Big Picture is in process now (1993 Uranus-Neptune @18Cap = transit Pluto: the big picture must be followed, very little option to do otherwise (Tyl); 18Capricorn = "The Union Jack Flies Over a British Warship": POLITICAL POWER...negative expression: smug or strong-armed paternalism' and police power to "maintain the social order" (Rudhyar). Or is that actually a hammer and sickle flag?

Okay, maybe Trump's current campaign against Amazon and Jeff Bezos doesn't rise to such a traitorous level but when added to other curiosities between Trump and Putin it satisfies yours truly as part of a Russian 'collapse America campaign' which seems to involve the themes of the The Tower Solar Eclipse of August 11, 2018 @19Leo which is the Prenatal Solar Eclipse of the 2018 Midterm Elections (another meddling can of worms).

Is it curious that Jeff Bezos built Amazon Tower, a 524-foot structure which opened on December 14, 2015 in Seattle, WA where he founded Amazon on July 5, 1994? Is the Amazon Tower in Trump's grumbling cross hairs? We shall see, as they say. But after all, how dare the richest man in the world build a Tower as if he's a Donald Trump, right? Because vengeful Mars-rising Trump, master of retaliation, might grouse just this way over Mr. Bezos and his accomplishments which 'tower' over Trump's--until he took over the Oval Office from which he can take revenge.

As for Wall Street, I'll add one final note to this rambling post: that the 1792 NYSE horoscope when progressed shows that a Progressed (SP) Full Moon perfected @7Can25 (conjunct Trump's natal Mercury @8Cancer, planet of trades, commerce, thought processes, tricks, and tweets) on March 10, 2017 and conjoined its SP Saturn-North-Node midpoint which provides some interesting potentials including: foreign enterprises offer assistance; a country in inner turmoil (Munkasey), both of which sound correct to me, if not to you, dearest of readers!