On May 10, 2018 a meeting between Donald Trump and North Korea's Kim Jong Un was announced for June 12, 2018 in Singapore. This is subject to change, of course, so I don't care to write about the meeting's horoscope until closer to the event, if then. However, the founding data of Singapore may be useful. We should note that in the transits on June 12, the Mars-Uranus square will have waned (Mars 7AQ; Uranus 1Taurus) while the war-like Mars-SN conjunction remains worrisome for its possible military connection and the fact that it continues to ruffle America's natal Nodal axis (6Leo/AQ). Another square will be formed by then between Venus (diplomacy) and quirky Uranus (revolt; freedom; independence; disruption) denoting willful people who resent any limitations on their actions, and the easy or sudden breaking of relationships, not the forming of them!

Now there are multiple horoscopes for Singapore (originally founded in 1819 as a trading post) and below is a dual image of two of them, both set for August 9, 1965--one for 10:00 am JT -7:30 (Proclamation of Independence, lower left), the other for 4:15 pm JT, the official hour of independence.

As you see, the 4:15 pm chart shows interlaced (focused) YOD patterns of crisis, crossroads (like at a trading post?), and/or special purpose--one with apex Sun in Leo, the other with apex Saturn Rx in Pisces--and Saturn the chart-ruler since business sign Capricorn rises. On August 9, 1965 by transit was a fanatic Saturn-Pluto opposition across the Virgo-Pisces victim-savior axis, and of course, in 1965 the Uranus-Pluto conjunction was perfecting off and on with all the protests and restlessness we could use. Curiously, in the 10:00 am chart, Trump's natal Mercury @8Cancer conjoins Singapore's Midheaven (8Can01), and on June 12, 2018 (typical as it is) Trump's natal Sun will be sesqui-squared by transit Mars (7AQ55) indicating ego conflicts and ill-considered actions; this transit is a three-fer and will repeat on July 11, 2018 and October 5, 2018. 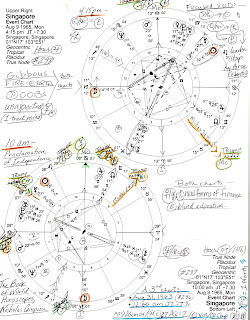 Singapore data from The Book of World Horoscopes, Nicholas Campion; charts shown here are #297 and #298. A third horoscope can be set for August 31, 1963 12:00 am JT with ASC 2Gem04, MC 27AQ17 (precisely where the current 1 South Solar Eclipse 'hit' on February 15, 2018 = "flooded with options and ideas"--Brady); also the 1963 chart reveals a practical Double Earth Sun Virgo-Moon Capricorn blend while the 1965 charts show a Fire-Earth Sun Leo-Moon Capricorn combination of energies.) Note that on the 10:00 am chart I've penned on most of Mr. Trump's natal placements--also note that large amounts of money may be involved in this 'summit' for in both charts gold-hoarding MIDAS conjoins Trump's natal Midheaven @24Taurus! So apparently Mr. Trump is expecting a lot from this meeting and relationship with Kim--even a Nobel Prize. The Cosmos does, after all, gift Trump with a Gemini New Moon near his natal Sun for his Solar Return 2018 which arrives a mere two days after his meeting with Kim!

Related are multiple versions of birth data and horoscopes for North Korean leader Kim Jong Un (RR: XX) but his birth year seems to be 1983.