Will Trump Tariffs Tank Our Blimp of State? Ask Putin

July 10, 2018: The US Economy and a Timely Cosmic Alert via Jupiter in Scorpio

As previously discussed, and with a tri-wheel of return horoscopes shown, Ronald Reagan is in process of posthumously enjoying another Jupiter Return, part of what everyone born on Earth enjoys--the Jupiter Reward Cycle which occurs approximately every 11.6 years. With his natal Jupiter in Big Money Scorpio (@13:44), Mr. Reagan in his day was intensely interested in gaining control, garnering money, and hitting the jackpot as he declared upon signing the Garn-St. Germain Depository Institutions Act of 1982 which economist Paul Krugman, in his NYT op-ed of May 31, 2009, himself declared, "--turned the modest-sized troubles of savings-and-loan institutions into an utter catastrophe." And the tremendously lucrative Reagan "jackpot" paid off years later as the worst economic crisis since the Great Depression. You remember how Wall Street was bailed out by taxpayers--but not Main Street where the 99% stroll...and show up for work.

So here's a re-publish of the tri-wheel of Reagan's current yet posthumous Jupiter Return/s in case you don't care to follow the link provided above or read details: 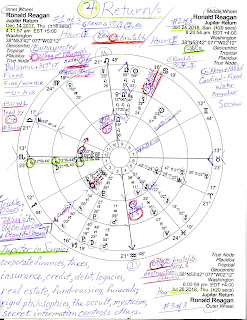 So in 2018 we have 'Republican' Donald Trump shakily steering the Blimp of State and the Trump Tariffs are promising and/or actually triggering bilious reflux in markets, on Capitol Hill, and locally as US workers and their families are already 'paying the price' for Trump's grandstanding over this particular campaign promise which drags job losses and trade wars in its wake. Some of our national politicians are dreading 2018 Midterms with the Republican Party hijacked as the 'Trump Party' and we know it's all or nothing with cultish Donald who refuses to take prisoners.

And yet today, as HuffPost reports, a Progressive Democrat Bails Out Trump on Tariffs--that's Ohio Senator Sherrod Brown. He has his reasons--or thinks he does, and good as they may be, this fail makes the US Senate look more toothless against Trump than before.

Now a reason to bring up all this now, besides the fact that we're mired within Reagan's current three-fer Jupiter Return/s (perfecting on December 14, 2017, June 24, 2018 Rx (just past), and next on July 26, 2018, as you see in the horoscopes above) is that transit Jupiter Stations and turns Direct on July 10, 2018--@13Sco20. Basically, this Station conjoins (and strengthens) Reagan's natal Jupiter degree and, consulting our Great Cosmic Clock, we find that the 2018 Jupiter Station occurs between Reagan's second and third exact Return upon his natal Jupiter.

It's as if The Gipper's (greedy) Jupiter has come again under tutelage of (gilted) Donald Trump. As if US workers needed that or will be supported by it. As if.

Yet the degree's symbol should also be considered here and I suspect that anyone reading this post has access to at least one version of the Sabian Symbols but fewer may have a copy of The 360 Degrees of the Zodiac by Adriano Carelli. And it just so happens that Carelli gives a curious symbol (word picture) for '13Scorpio' (he champions the actual degree, not the rounded-up degree). Which is:

"A lonely stronghold on a high mountain top, a veritable eagle's nest. The place is fortified by nature itself rather than by man's hand. It is the key-point of the region, and its possession grants sway over the neighboring states."

This symbol describes one who has been earmarked by fate "to occupy an eminent, independent position and to hold sway over others, owing to his inborn inexhaustible force. To obey him is a matter of course, nearly of necessity.

An untiring, hard worker, he is fully confident in himself, and his firmness of purpose borders on stubbornness. Laconic, or even silent, he can scan and pierce everything around himself at a glance without betraying any of his feelings. Close but long-sighted, strong but on his defensive, cunning yet intelligent, he has fortune on his side and all the good and evil needed to assert oneself and achieve success, his main asset being an iron will, unshakeable and undaunted; his main defect, a selfish, despotic, scheming ambition.

When other aspects point to a liking for the career of arms, this degree will bestow the gift of strategy."

Carelli then cites '13Scorpio' as the degree of Napoleon Bonaparte's Ascendant although either one of us may be able to think of one or more modern day despots which this symbol could also describe, if not the seemingly mild Mr. Reagan. So is the 'stronghold' Washington DC? Perhaps, but first I must wonder--exactly where in Helsinki, Finland will Trump and Putin rendezvous on July 16, 2018? Perhaps in a naturally fortified strong-hold, secluded on a mountain top? Wouldn't that be so-o-o romantic!

In closing, here's an excerpt from a December 2, 2017 post published to 'honor' the passage of the Republican Tax Cut Bill, the massive give-away to Corporate America--yet another "jackpot" for the wealthy stolen at our expense:

Transit Jupiter, planet of bankers, donors, financiers, politicians, military generals, and preachers is in 2nd house of Money and Values @11Sco19 and approaches the upcoming Jupiter Return of Ronald Reagan under whose watch the last major overhaul of US taxes took place. The first of three conjunctions of transit Jupiter to Reagan's natal Jupiter position occurs December 14, 2017 with its 'tax cuts for corporations stimulates job growth' fallacy now being re-used by Capitol Hill Republicans in spite of the fact that corporate tax cuts do not inspire corporations to re-invest in US workers and the economy. Having been burned before, this time a majority of Americans are not buying into the tiresome GOP-touted job-creation fallacy that Reagan lifted from Hoover times of the 1920s. And here we go crashing again.

A curious one may wish to read the rest...

While Trump behaves just like Putin would do, the current version of 'Trickle Down Economics' fails us once again as the wealthy class intends. Can you feel it as The Tower Solar Eclipse approaches which also happens to be the Prenatal Solar Eclipse (PE) of November's 2018 Midterms? Though cracks show now, it may take a while, so care to pre-guess whose tower will collapse into rubble?