Here's an overdue peek at the planets during Mr. Trump's 2013 visit to Moscow for the Miss Universe Pageant, the one where tapes were allegedly made of Trump in the Presidential Suite. Apparently the reason the reputedly raunchy session with Russian working girls occurred in Trump's Moscow hotel room during the trip was to 'defile' the bed where the Obamas had previously stayed. To me, if so, this 'reason' makes Trump's lewd depravity in Moscow seem even worse via bigotry and his jealousy of Mr. Obama's popularity which Trump can never achieve. He says he's a germaphobe so the event couldn't have happened but such a condition would not have kept him from watching!

Yes, Moscow November 2013 must have been a busy if not a whirlwind weekend trip for Donald Trump. For one thing, the Miss Universe Pageant 2013 provided him with millions of dollars and a chance to make puppy eyes at Vladimir Putin who is perhaps Trump's primary role model in the realm of cold-blooded dictators. Held on November 9, 2013 at the Crocus City Hall in Krasnogorsk, a suburb of Moscow, the pageant now provides a handy reference point during the trip itself whether Trump's private goings-on were lewd or not. He has in the past repeatedly denied that he spent the night in Moscow as detailed in the Comey Memos. Yet perhaps one of the the more important points is that Trump and Putin could have met although reports say otherwise (I'm imagining Putin's dark-windowed limo waiting for Trump in an alley beyond the Crocus City Hall building and a furtive promise to help shoehorn Big T into the White House).

Well, here's a brief CNN video about the pageant which ends with a screen shot of Trump's post-pageant tweet to Aras Agalarov on *November 11, 2013 at 8:39 am (see chart notes, below). His informative tweet said, "@AgalarovAras I had a great weekend with you and your family. You have done a FANTASTIC job. TRUMP TOWER-MOSCOW is next. EMIN was WOW!". How one spends a weekend without spending at least one night is anybody's guess. Emin is Agalarov's son, a singer, and of course those are Trump's CAPs not mine.

NPR published Timeline of events yet so far I've not located an exact start time for the pageant so let's choose 9:00 pm Moscow Time on November 9, 2013 in case such a chart is needed for future reference. Note that Miss Venezuela, Gabriella Isler, was crowned Miss Universe in 2013--and you'll remember that beforehand, Trump had tweeted like a little gurrl wondering if Putin would become his "new best friend." 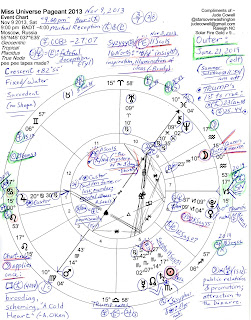 As usual, my study notes are penned upon the chart so hopefully you might enlarge the image to read them if you wish. You'll see that a few of Trump's planets are around the outside (like his natal Saturn--first to rise in this chart, followed by his Venus in watery Cancer) but in green are added planetary transits for today (June 21, 2019) so as you see, the problematic South-Node-Saturn-Pluto trio that everyone now deals with conjoins the Descendant (17Cap15) of this horoscope (the 7th house of Partnerships, Alliances, and Open Enemies) and which threatens his Saturn-Venus by opposition (conflicts, under pressure, and difficult legal matters).

Rising Jupiter Rx @20Can30 conjoins fixed star Castor (see the center of chart for Castor's key concepts--expanded or increased by Jupiter) and the 2013 pageant's Prenatal Solar Eclipse ('PE') in the inspirational 16 North series is highlighted in red; the PE snugs between Saturn and North Node with the pair's very interesting 'mystery of the three days' implication according to Ebertin (Saturn-NN); reflecting a public event, the Moon @10AQ23 conjoins asteroid Juno the 'Queen of Heaven'--or in this case, Miss Universe!

And notably, the passionate Venus-Pluto conjunction opposes Trump's natal Mercury (8Can51 in his 11th house of Groups, Hopes, Wishes) suggesting such potentials as: lasciviousness, desire for sensual pleasure, thinking about sexual relationships (and I would add, thinking about large amounts of hidden money and/or bankruptcy), talking about sexual diseases, and--last but not least--attracting elements of organized crime (ex: the Russian mob).

Also showing in the chart are: high excitement about ambition (Moon-Uranus = MC) promiscuity and suspicion (Neptune-NN = Venus), making contacts who can be helpful (Mercury-Saturn = NN), and fateful deception (Sun-Neptune = Pluto, the wealthy, powerful manipulator, saboteur, and criminal). Besides, when transit Pluto opposes anyone's natal Mercury possibilities include mental manipulation, obsession, and struggles for control which may involve investigation and/or the misuse of secret or confidential information (such as making tapes of naughty activities for the purpose of blackmail) while thoughts and self-expression are transformed in some fundamental way. And although greater personal power is sought, this is a negative period so plans are unlikely to turn out for the better.

A 'Trump tweet' horoscope set for November 11, 2013 at 8:39 am est NYC shows 12Sag24 rising with the harsh Saturn-Pluto midpoint (concentration upon important matters which lie before you--Ebertin--and 12Sag is often considered to be America's natal ASC: cumbersome circumstances), the Sun had reached 19Sco19 conjunct the pageant's sexy Sappho (@19Sco51 5th house, above) plus, two difficult stars in Scorpio, and a Pisces Moon had snugged between Neptune Rx and Chiron Rx in the 3rd house of Communications which suggests to me that Trump's tweet expressed a lot of unconscious emotional energy while attempting to exercise a considerable amount of psychic manipulation.

Trump's so called level-headed air strike postponement was to lessen the impact of E.Jean Carroll's rape allegation. He is a deplorable being.

Thank you Linda! and I suspect your surmise is correct. He is a master of distraction isn't he? A Gemini 'magician'. jc