On the topic of new and old orders falling, being built, and morphing into the next, here is the timed horoscope (via news report; RR: A) of the Fall of the Berlin Wall November 9, 1989 where we see Jupiter Rx exalted in Cancer and rising and, it turns out, awaiting its 'eclipse' which occurs on July 2, 2019 in the form of the 3 North Solar Eclipse @10Can37 (chart set for DC, not Berlin); please enlarge the image since my study notes are penned on the chart and will not be repeated in this text: 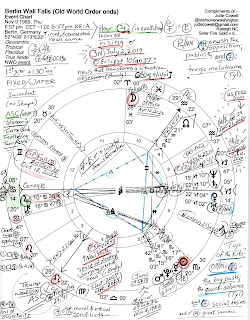 The horoscope of this global event, a major signpost along the dusty trail toward the draconian 'New World Order' (which some say is actually the 5G 'Smart' Grid), reveals a variety of cosmic time links to planets, conjunctions, and lunations within the 2019--2022 period and I believe that this is partially because those in charge (lurkers behind the curtain--'presidents' and politicians are mere figureheads) use--have always used--occult methods such as Astrology to time their devilish activities. You may disagree but there it is.

Naturally, with the sign Cancer involved, plus, the planet Jupiter, financial implications or complications are suggested by the July 2 Eclipse and by the July 16, 2019 Lunar Eclipse in Saturn-ruled Capricorn (@24Cap04--near US natal Pluto and opposing US natal Mercury--security, surveillance concerns and/or spying scandals exposed? Even Cancerian food supplies may be affected).

So which planets in Mundane Astrology are associated with old and new orders?

We can point to Saturn (old; the past) and Uranus (new; the future) and consult their 45-year cycle for timing purposes. Their current cycle began when they last conjoined three times, all in 1988: February 13 @29Sag55, June 26 @28Sag47, and October 18 @27Sag49 during the presidency of Ronald Reagan who, among other things, signed a trade agreement with Canada in 1988, if memory serves. And of course, on November 8, 1988, George H. W. Bush was (s)elected president and continued to experience some measure of fall-out from his Iran-Contra role, hidden as it was intended to be. Meanwhile, karmic Saturn went on to meet with Neptune in Capricorn three times in 1989 (@10-12Cap). Yet for our topic today--years 2019--2022--we should note that the next Saturn-Uranus Conjunction won't perfect until June 28, 2032 @28Gem01, opposite their 1988 meet-ups.

Therefore, I'm 'calling it' for the two societal planets as timer--Jupiter and Saturn, for their conjunctions relate to the beginnings of new social, financial, religious, and political orders which endure for about 20 years, with the current cycle in force since May 28, 2000 (@22Tau43). So in case you haven't seen it, here's a DC Horoscope of the upcoming Jupiter-Saturn Conjunction at Winter Solstice which conjoins and activates America's POTUS Sun degree (00AQ+) on December 21, 2020, just in time for Inauguration 2021.

A prominent midpoint picture will form--Jupiter-Saturn = Sun: "Taking destiny into one's own hands; major changes according to plan; or, if nothing has been prepared, becoming gripped by the status quo and having to make the best of things (Solar Arcs, Tyl).

Related: The Prenatal Eclipse of Inauguration 2021.