America, Trump, and Eclipses in The New Millennium

On June 21, 2013 the New Millennium Horoscope with chart details and snarky comments (as usual) were published here on SO'W. Feeling this is fair since politics and politicians so often engage in snarkiness themselves, I shall again post the New Millennium Horoscope now that Donald Trump is on the political scene and will add his planetary links to the chart which, imho, are revealing concerning current topics and events in America 2019 under the haphazard 'leadership' of chaos-lover Trump and the swamp creatures he's installed in order to hollow out and transform the US government. As I hope you can see, Trump's natal planets are highlighted in lavender around the outside of the chart and a few solar eclipse notes (highlighted in red) are also entered upon the chart, upper right. Note that the December 26, 2019 Solar Eclipse @4Cap07 activates the Prenatal Eclipse ('PE') of the New Millennium so the themes of 2 South and 3 South and their similar events may or may not transpire as 2019 ends and our days fade into 2020. Eclipse themes are like computer programs running in the background of our lives, some stronger than others! 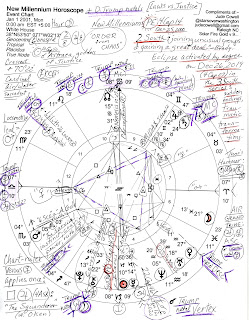 (Please enlarge the image; this is only a partial reading of the chart in order to keep things brief.)

As for Trump's planetary links to the New Millennium chart, his natal Mercury (8Can51) tweets and propagandizes across the globe at its Midheaven, the most visible Angle in any horoscope and The Goal Point. Rising we find Trump's speculating, inflating, grand-scheming trio of Neptune-Chiron-Jupiter stationary and we don't need Astrology to describe the pompous, air-filled, conman administration of kleptocrats under which we languish while Herr Trump separates families, cages children, and makes his white supremacist loyalties plainly known. (Expressing through his deal-making Mercury in Cancer, sign of tribalism, patriotism, nationalism, self-protection, homeland, children...and business interests.)

And there in 3rd house you see wounded Chiron @22Sag33 conjunct Trump's natal South-Node-Moon conjunction--so tender, so emotionally sensitive...and wounded to the core. Does wounding and harming children now make him feel better about his childhood Mama issues of estrangement and neglect? Did she cage little Donald or simply feel like doing so? From what I've heard, he was a terror (then as now).

Meanwhile, in the chart's 8th house of Corporatism, status quo Saturn Rx @24Tau34, the 'papa planet' of authority, authenticity, responsibility, and accountability, sits upon Trump's natal Midheaven where enraged Algol twinkles malevolently--and the "angry father" appears. Of course, this reveals that around the time of the New Millennium, transit Saturn in luxury-loving, intolerant Taurus conjoined Trump's natal MC and entered his 10th house of Career and Public Status, a period when hard work pays off (if there's been any!). However, blaming others for one's mistakes and failures will ultimately lead to deep regret and an eventual lack of success. This is particularly the case if power and authority have been abused and/or misused and a position of authority ill-handled--just what demanding Saturn never orders.

So not only was Trump old enough to know better in 2000 and 2001, he's way-y-y old enough to know better now. But sadly, old man Saturn's lessons of maturity and taking responsibility for one's actions (and correcting mistakes of the past) went unheeded by the New York Playboy then and in 2019, opportunities for personal improvement have long since passed him by, leaving a disappointed America with a fat blob of a man-baby in Saturn's wake as thespian Trump playacts the authoritative position at the helm of our nation. And he thought it would be "easy"!