Below you see a marked-up version of the natal horoscope (RR: AA) of Senator and 2020 presidential candidate Kamala Harris who is inherently qualified to fulfill the role of President of the United States. Whether she can successfully circumvent the multiple cheating tactics and propaganda campaigns of Trump and the GOP on and prior to Election Day 2020 remains to be seen but Senator Harris definitely has the talent, drive, and ambition to take over the job of POTUS on January 20, 2021! 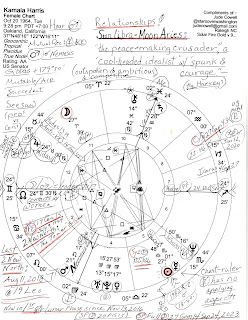 Outspoken and competitive, Senator Harris is a "peace-making crusader" and a "cool-headed idealist" with "spunk and courage" according to her steamy Air-Fire Sun Libra-Moon Aries personality blend. Her Scorpio Mercury adds objectivity to her Libran Sun while indicating practicality, intellect, and an ability for deep study and perseverance in pursuit of arduous tasks and solutions. With no applying Ptolemaic aspects, chart-ruler Mercury's sign and house position (5th h of risk-taking, gambling, romance, creativity) are prominent. However, lively disputes and sharp criticism are potentials with Mercury in Scorpio and these were observed in the June 2019 Democratic Debates as she leveled her sights on fellow candidate Joe Biden and handily aided herself in the polls! Plus, having Mercury (Scorpio) and Pluto (Virgo) in Mutual Reception resonates with her political activities, some of which are of a secretive nature. This planetary duo finds sympathy with America's natal Mercury-Pluto opposition of spies, secrets, surveillance, and investigation. If you wish, check out her law-related career in her Wikipedia profile.

So tonight (July 31, 2019) is a return engagement for Kamala's debating Mercury in intense Scorpio so let's see how she does this time--and with transit Mercury's Direct Station tonight at 11:58 pm edt in her natal 2nd house of Values. And as you know, there's a New Moon @8Leo37 tonight, the phase when seeds are planted, and the New Moon conjoins Kamala's natal 3rd cusp of Communications. Some measure of harvest comes with the Full Moon of August 15, 2019 @22AQ24 in Harris' 9th house and opposes her 3rd house Mars. Therefore, there may be a spot of disappointment, and defiant or hostile reactions involved for her at the Full Moon for natal Mars is apex of her natal speculative Jupiter-Neptune midpoint. Will a bubble burst?

But for now, tonight's the night and we can't miss her powerhouse trio of Uranus-Pluto-Venus in 4th house, one of the Psychological Houses at that. Yes, accusations and attacks can fly from this particular trio and may very well do so in tonight's debate. After all, that very visible 10th house Chiron in Pisces mentor didn't mentor her for nothin'! Will the mayor's name come up as Campaign 2020 progresses? Well, I think it already has.

Another interesting factor about Harris' Mars @21Leo17 is that it's near Trump's natal Mars @26Leo rising--and conjoins her natal Nemesis (divine retribution; the unbeatable foe) which adds intensity to her competitive nature. And there in 2nd house is her Prenatal Solar Eclipse ('PE') @17Can15 in the 2 New North Saros Series--the degree of transit North Node as I type! Curiously, Harris' PE spotlights Trump's natal Nemesis (16Can40). Were they born to rumble? Maybe so considering the karmic nature of the Nodal axis.

And of course you'll remember the last manifestation of a 2 New North eclipse as 'The Tower Eclipse' for it was only on August 11, 2018 that it perfected @18Leo41 with its 'collapse of plans or lifestyles' and 'rebuilding' themes that continue to threaten tower-builder Donald Trump and his empire with the distinct potential of falling into rubble. And as you know, Trump recently 'fibbed' about being at Ground Zero on 9/11 which everyone in his audience of First Responders knew was a lie! Actually, Trump touted on that day how Trump Tower was then the tallest building in New York. That was his greatest concern, his Tower's rat infestation notwithstanding.

Now whether Trump will be mentioned in tonight's debates I know not but it won't be surprising if he is especially since Senator Harris' natal 12th house Jupiter Rx @24Tau00 sits directly upon Trump's natal Midheaven (24Tau18) where vicious star Algol holds sway. And after all, his nibs constantly provides Democrats and others with so much ammunition how can anyone on camera neglect to mention his unsuitability for the office he precariously holds--the office each one of them on stage tonight is determined to grasp as their own?

Well, at least the candidates with enough spunk are that determined!

Related: DC Horoscope: Election Day 2020 displaying both 12:00 am and 11:59 pm horoscopes for November 3, 2020. The Election Moon in Gemini (We the Voters--of two minds?) will approach the natal Ascendant and North Node of Kamala Harris but will actually conjoin the 10th house Sun-NN conjunction of Donald Trump but oppose his problematic natal Moon-SN. So will the outcome of the 2020 race be disputed and take a little time to settle once transit Mercury, planet of ballots, votes, and decisions, begins moving forward and passes its shadow degree on or about November 19th or 20th?

Totally agree...Kamala Harris has the intellect, spunk and nerves of steel.

Madam President, a title she can wear well.