Dissolving Neptune and the Republican Party in 2019 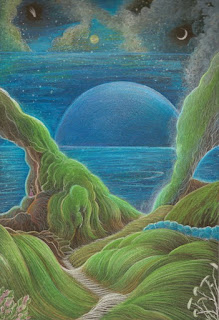 August 3 2019: With multiple Republican congressmen retiring from what's become the 'Party of Trump' anyone could be forgiven for blaming The Long Shadow of Neptune for such losses and disapearances along with the fact that a recent Neptune Return (a five-fer actually) has occurred for the 164-year-old Republican Party which formed March 20, 1854 in Ripon, Wisconsin with Neptune @14Pis01.

For as you know, dissolving Neptune disintegrates, undermines, and weakens most easily when floating through its own sign of watery Pisces and can bring inspiration, yes, or the urge-to-merge planet can conjure negatives such as pathological tendencies, propaganda, lies, self-delusion, disguises, pessimism, contagion, fear, and paranoia in its wake--and as we see with retiring Republican congressmen and other issues of loss, Neptune is apparently flooding the GOP.

So as illustrated by the image of my drawing, above, when it comes to the Republican Party in 2019, Neptune Ascends and what will be left of the party once the washing away is done who can say? Here's one guess: snivelers and sycophants?

Ooooh!! Here's hoping! BTW- love your posts,.. they always have me looking at more charts!!!!

Thanks a bunch Martina Inspiring the looking at more charts is precisely part of my dastardly plan!! ;)