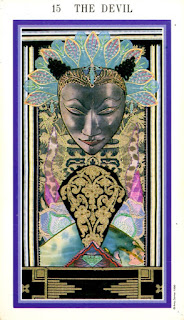 August 1, 2019: today Mary Ann at Revealing Light Tarot posted to YouTube an illuminating reading on this week's Democratic Debates which focuses on candidates Marianne Williamson and her "dark psychic forces" reference to Donald Trump, Senator Elizabeth Warren and her popular appeal, and Joe Biden and how some Republicans may vote for Biden on November 3, 2020 "just to get rid of Trump."

For astrologers, tarot readers, voters, and others who are not under the spell of Trump (Gemini the magician!) his evil, violent intentions have been clear from the start. What was Nazism but a death cult? And the Klan and white supremacists are dark birds of a feather as well. So as we've previously discussed, Trump's unaspected Pluto in Leo in his 12th house of Karma, Self-Undoing, and Politics identifies him as a man "overshadowed by shadows," a description of someone ensnared by the evil forces of Pluto, the 'dark lord', a man haunted by his own misdeeds. Of course,
Pluto (of the plutocrats!) relates to the Underworld of death, criminal syndicates (mobsters), and hidden (and nefariously gained) wealth but also to black magic and the mind control techniques Trump employs in his rhetoric a la Herr Hitler. This is one reason yours truly has taken to referring to his nibs as 'Herr Trump" which may be wrong but it feels so right.

To illustrate, here's an excerpt from an October 4, 2016 post concerning his Unaspected and Out-Of-Bounds Planets (my Bold added):

We must put a double emphasis on the condition of Mr. Trump's natal Pluto in egotistical Leo since Pluto is out-of-bounds as well as unaspected. When OOBs, Pluto embodies the lawless, mold-breaking, zaniness of an OOBs planet along with an outside-the-box style of thinking and speaking that breaks boundaries and cannot be under anyone's control. Pluto grabs power (and publicity) and we don't need Astrology to tell us that this describes Mr. Trump to a T.

However, disturbingly for our country, an OOBs Pluto, archetypal god of the Underworld, may also indicate one who is a sociopath and/or a criminal, particularly in the Leonine realms of gold and finances. {} Certainly his oppressive business dealings are in the news via contractors and others who have worked for him but have not been paid, plus, the tax avoidance made possible by laws that favor the wealthy--legal, yes, but anti-societal and hypocritical of him. And the primal violence of Pluto has been part of his campaign--even to the point of hinting at Second Amendment gun violence as an antidote to certain problems via Pluto, the assassin, aided by aggressor Mars (edit: which rises in his chart, and also in 12th house with saboteur Pluto).

And here's an excerpt from a May 18, 2018 post A Ginger Step into Donald Trump's 12th house which applies to today's plutonian topics:

Distorted by years of repression, Pluto in 12th house denotes intense passions, primal fears, and obsessions that for Donald Trump are unevolved because his Pluto is unaspected and detached from his other planets. He may often feel that his ego will be overpowered by others unless he fights 'tooth and nail' for he must win at any cost just to survive. Compulsively he tries one defense then another in an effort to defend himself from attack even though the gained relief may be only temporary and such 'solutions' usually lead to bigger problems later on. Is Trump a bearer of our Collective Shadow? Pluto in 12th says so, and reveals the presence of demonic forces of the unresolved 'sewage' of mankind. Tragically, this supports the theory now being heard in our public discourse that we Americans have the president we deserve.

Today I will add: deserved--but giving We The People the chance to change America's course from the dark side! Marianne Williamson supports reparation, a very good start, and I would add the withdrawal of the US military from the Middle East, and--of course--holding Trump, his minions, and enablers accountable. His kleptocracy of incompetence and exploitation must end!

And who can forget Trump's former (?) handmaiden Steve Bannon who was quoted in a DailyKos article on November 18, 2016 that, "Darkness is good. Dick Cheney. Darth Vader. Satan. That's power." He went on to say, "It only helps us when they (liberals) get it wrong. When they're blind to who we are and what we're doing." Oh we see you: you're political fanatics and satanists who conjure and use "dark psychic forces" to call upon America's Collective Shadow for support of your vile, violent, anti-American ideas.

So let us remember that although Trump is a TransPluto Figure, Saturn-Pluto Time Nears (Conjunction @22Cap46) which will hit Trump's natal Vertex (22Cap51) of 'fated encounters' and/or 'changing work conditions' on January 12th and thus color the entirety of year 2020! Yet the Saturn-Pluto combination of energies can also engender 'the adept' and 'the magician' (Ebertin) so here we are back to Trump the Gemini and a magician of the black arts.

Now in case you're wondering after all my fussing, my 2020 druthers for president in a fair world is Senator Elizabeth Warren whose Sun-Uranus conjunction would be a good debate match for Trump's Sun-Uranus conjunction--hers in Cardinal Cancer, his in Mutable Gemini with his karmic North Node in between. But I see no way that Big Bankers will approve Senator Warren as the Democratic nominee given her policies, or as president if she's the nominee. And Joe Biden? He recently told the wealthy class that "nothing will change" if he's elected and I believe him. So no repeal of the revenue-dwindling GOP tax cut for the wealthy, Joe? Complicity! Plus, there's his somewhat controversial record in politics. Well, as I've stated many times these last few years, I'll vote for a rag mop for POTUS as long as it isn't a Republican. How about you, dear reader? Under Trump's spell are you? Doubtful if you're reading Stars Over Washington!

Above image: 15 The Devil card from The Enchanted Tarot.

I will vote for any of the current 20 Democratic candidates. Getting rid of Trump is the number one priority. That said, I like some better than others.

I also think we will be shooting ourselves in the foot if we do not have an African American, Asian American, Latino, or two, on the ballot.

As a WOC, it has been absolutely gut wrenching to watch the escalation of racism and hate in this country. I had hoped to see a a more inclusive America. The future is female and Elizabeth Warren, Amy Klobuchar, Kristin Gillibrand and Kamala Harris reign supreme. I'm done with white male saviors.