Yes, this particular astrologer is a common-good sort of American and since we're stuck with two political parties, my preference is that both parties contain honest men working on behalf of the American people. But in this 'New Millennium', my suspicion is that the majority of We The People realize that this is only a bubbly dream that went pouf! decades ago if indeed it was ever reality at all. Founded on Plato's Ideal Society, most of America's Founders were members of secret societies and held an esoteric mindset full of high 'Enlightenment' ideals which subsequently have been quite easy to 'repeal and replace' with crass materialism and me-first attitudes which are now embodied in a compromised Donald Trump playing POTUS as he rakes in the cash at the expense of our republic.

Today is September 21, 2017 and once again the Republican Party thinks to 'repeal' what they disrespectfully have called 'Obamacare' and replace it with a misshapen version of 'healthcare' insurance that some have called Trumpcare ('Trumpscare' more like). So considering how industriously the GOP has worked since the ACA (Obamacare) was passed into law (March 2010) to undermine its provisions and trash talk it down--as they continue to do--we may wish to consider the current condition of the GOP via its natal Neptune, planet of corruption, fraud, falsehood, scams, scandals, delusions,spirituality and inspiration and its natal degree of 14Pis01, for as astrologers of the Tropical Zodiac recognize, transit Neptune has been precisely on that degree in recent times. In fact, the Republican Party's Neptune Return is a five-er due to Neptune's off-and-on retrograde periods. But first...

In a forum on the Noel Tyl website data is given for the natal Horoscope of the Republican Party as March 20, 1854 6:30 pm LMT Ripon, Wisconsin with 4Libra23 rising and 5Cancer14 at Midheaven, the Point of Aspirations and Goals. The source cited is The Origin of the Republican Party. A 5Can14 MC spotlights America's natal Jupiter @5Can56 (July 4, 1776) with its telling Sabian Symbol: "Game Birds Feathering Their Nests." Wonder if this is one of the reasons Harry Truman asserted in 1948 that the Republican Party was a party of the rich and that that's all it would ever be?

If you're curious, here's what Harry thought of the Republican Party. 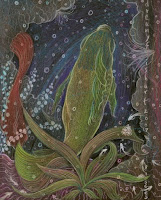 So just what is a Neptune Return? With distant Neptune's approximate 165-year cycle, no human being has ever enjoyed one, of course, but nations and other long-term entities can. Amazingly, we who are now living are in the midst of one at this very moment--the Neptune Return/s of the Republican Party--now 'in control' of our three branches of government. And we can feel how Neptune's typical lack of clarity and fanciful notions are working for us.

So first, let's consider through a common-good Political Astrology lens the meaning of Neptune floating through its own sign of oceanic Pisces, sign of the Two Fishes--one swimming upward toward the highest ideals and standards, and reaching the Divine Source, the other swimming down toward the depths--of shady criminality, the Underworld, corruption, deception, delusion, disappointment, and/or the depths of despair. Yes, drug taking and trafficking are down there somewhere along with damning secrets and leaks of inconvenient truths.

Plus, Neptune in Pisces is a primary indicator of the Collective Unconscious which, at least around Stars Over Washington, relates to the US presidency through America's four-year cycle of Inaugurations on January 20th at noon in Washington DC--with 14Taurus rising and bringing starry Menkar the Whale along with the presidential oath. Keywords: victim of the unconscious. Through the Biblical story of Jonah, this archetype also relates to saying what must be said whether you want to or not. (You know--like a president mouthing words written and directed by higher authorities--'the big picture must be followed', etc. Or dethroning follows.)

As for transit Neptune in Pisces, we are in a period since February 3, 2011 of increased interest in mysticism and the paranormal, spiritual quests, inspired art, music, and literature, psychism, alcohol and other drug cravings, contagions, and/or pessimism. This is also a time when deep pathological tendencies float up from the unconscious minds of those who unfortunately have them, whether through nature, nurture, or both. Transit Neptune will be in Pisces until January 2026 so we all have a ways to swim just yet until the Mars-ruled Aries Point of World Manifestation is reached by Neptune with potentials for the love of humanity, ideas concerning the social welfare, confusion, and/or insane or mad ideas (R. Ebertin).

Now in the natal chart of the Republican Party, we may surmise a bit about their Neptune Return by considering natal Neptune's general condition--aspects, midpoint pictures, house rulership, degree, etc. For as you know, any planetary return repeats the aspects of the returning planet to other natal planets thereby casting a light upon them and their indications. However, for the 1854 GOP, the aspects of natal Neptune in natal 6th house (and ruling it with 9Pis20 on the cusp) are wispily threadbare to say the least for there is only a semi-square (2A28) to natal Pluto @1Tau30 in natal 8th house in evidence. There seem to be a few possible ways we can read this:

Weakening Neptune in a weak square with Pluto which brings periods of social turmoil, the subtle disintegration of social structure, and corrupt political institutions. These are, in my estimation, precisely what the 'political class' is all too eager to provide for us with corporate-bought Democrats as the Party of the Rich's enablers. And note the use of subtlety as they continually attempt to hide their paw prints from their crimes!

And if we consider the GOP's natal Neptune as unaspected, we find materialism to be the inspiring world view with full dependence upon rationality and an inability to believe in the numinous. Lack of aspects denotes that the spirituality of planet Neptune is unable to give lofty insights to the rest of the natal planets, resulting in a dry, serious, or cold demeanor (and a lack of smiles, as you may have noticed!)

Another way to look a the GOP Neptune Return/s is the house position of natal Neptune in the 6th house of Health, Work, and Military, Police, and Civil Services. Now I don't have to mention here how all of these areas relate to ongoing Republican efforts to undermine the US government and the American people so I'll simply mention the Sabian Symbols (M.E.J. version) that apply to the party's natal Neptune--the karmic confrontation degree of '14Pisces' and '15Pisces':

'14Pisces': "A Lady in Fox Fur" (my italic for an obvious reason): "negative expression: amoral opportunism."

(The Sabian Symbols in Astrology, Jones.)

In addition, we should mention that Neptune in mid-Pisces conjoins a certain fixed star: Achernar with the key phrases: a risk of rapid endings and crisis at the end of the river. Neptune's position in 1854 also conjoined an asteroid/archetype, Toro, one of the power asteroids that relates to nuclear power and to Wall Street's pagan worship of the golden bull. This also reminds me of Congress' tricky "nuclear option"!

Now let's close with one more thing about the GOP's natal Neptune and that is its involvement in a natal midpoint picture: Neptune-MC = Uranus (10Tau12 in 8th house of Corporatism and Transformation): the desire to bring ideas to realization at all costs.

This sounds just like the GOP and their enablers to me as they dance self-destructively to the tune of their wealthy domestic and foreign donors.

Related Reading: Prospects for a Golden Age: The Meaning of the Great Planetary Cycles by E. Alan Meece.