2020 Saturn-Pluto in the Roman Empire Horoscope

October 12, 2019: As a sort of follow-up to my October 10th post Are We Waiting for the Empire to End or Witnessing It? here is the Horoscope of the Roman Empire as provided by Nicholas Campion in his classic The Book of World Horoscopes, chart #255; basic chart-notes are scribbled about, as you see, so please enlarge if you wish to read them: 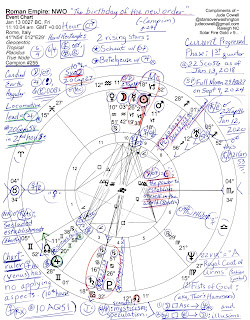 ASC 4Tau34 so 10th house Venus is chart-ruler in materialistic Taurus but with no applying aspects which emphasizes her sign and house position; the Venus-Pluto midpoint rises = 'wielding great influence over others' (Ebertin), and as you know, 'goddess' Venus is an archetype of Mary and of other older goddesses such as Inanna, Ishtar, Isis, even Ceres (the mother) which figures prominently in various symbols across Washington DC (Masonic emblems such as wheat shafts, etc, with Virgo the Virgin an obvious identifier). Plus, America's 'Columbia' falls within this panoply. Yet we mustn't forget the ancient Roman Cult of Mithras, the gold-loving 'god' worshiped by Roman soldiers--especially since gilt-edged Trump must admire him, too.

Now the Roman Empire became 'a thing' during a certain Solar Eclipse Saros Series ('PE'), of course, and in 8th house you see highlighted in red its PE @20Sag08 which perfected on December 13, 028 BC (conjunct Trump's natal South-Node-Moon conjunction of awkwardness and emotional deprivation). Unfortunately, my software doesn't go back that far for eclipses so I have no themes to provide here. Yet a few clues may be ascertained by the fact that the eclipse manifested in Jupiter-ruled Sagittarius (opposite the empire's natal Jupiter Rx @20Gem58). Jupiter the General leads a Locomotive shape of the planets and is ruthlessly determined on success. Note that ideal-oriented Jupiter, planet of expansion, adventure, and the crossing of boundaries, rules both 8th and 9th houses--spheres of the occult, death, and of foreign lands and philosophy.

So when a PE is in Sagittarius, negative tendencies can naturally interfere with karmic progress so I shall list the potentials here for your consideration: religious convictions which may or may not be spiritually correct, misguided beliefs, misplaced idealism, and/or false optimism. The development of a spiritual philosophy is a best-results requirement of a Sag Prenatal Eclipse with Jupiter ruling codified religion. Here, Jupiter is retrograde which may suggest the blending of church and state with the state having the stronger role initially and the church as hidden manipulator. Please note that I wasn't there at the time so this is only speculation on my part.

On January 12, 2020 Saturn and Pluto Confer as Karma Occurs!

Now one reason I've taken a closer look at the Horoscope of the Roman Empire and am publishing the chart here for future reference, if needed, is to locate the January 12, 2020 Great Conjunction of Saturn and Pluto. As you see, Saturn-Pluto @22Cap46 will conjunct the empire's Sun @21Cap33 at Midheaven ('MC'), The Goal and Aspiration Point (aka, The Why? Point), toil, sparing no pains in one's work--Ebertin--and will oppose the empire's natal Saturn Rx (16Can56 ) and Pluto (26Can51)--their midpoint @21Can53. Additionally, natal Mercury @26Cap19 is roped in to these difficult, karmic energies as well along with its natal Mercury-Pluto opposition of secret projects, hidden motives, clandestine manipulation, dangerous activities, spies, and a tiresome tendency to interrogate others. This qualifies as transit Saturn and transit Pluto opposing natal Saturn and natal Pluto (abuse of power and authority issues challenged; battles for control engaged).

To say the least, it will be riveting to see what developments take place on an empire-collapsing and/or world government level as 2019 ends and 2020 continues heating up as the American Empire is shaken to its core by a gang of saboteurs and infiltrators with fascist tendencies resulting in a further disintegration of democracy and ultimate collapse of the US government if the hollowing out of our traditional institutions is allowed to continue.

And yet as world history shows, old orders must always give way to the new. But what species of 'new' will be implemented should be the choice of humanity, and not of those who are determined on the destruction of civilization!

A recommended video (8m35s) narrated from A People's History of American Empire by Howard Zinn which opens with the timely question, "Empire or Humanity?

it may get pretty terrible America I am sorry to say. I am a Canadian and look down {not literally} at your United States. I just see the Pluto Return of the founding of the U.S. as THE most important factor. There will be a revolution in the U.s. it's inevitable and Trump is part of the Divine Plan. This has nothing to do with what anyone thinks of him. These are larger archetypal issues. yes, I can see the resemblance to the Roman Empire. Pluto transits are slow and remember when Pluto entered Capricorn in 2008 what happened. Saturn Pluto opposition from Gemini/Sagittarius in August of 2001 resulted in you know what. Also Note the U.S. progressed Mars turned retrograde on July 19, 2006 for almost 70 years!
the North Node in Cancer has me intuiting Bob Dylan's famous protest song A Hard Rain's A-Gonna Fall and we can hope still not nuclear. If we can make it through to December 21, 2020, and the New Age of Jupiter Saturn's Grand Conjunction at 0 Aquarius that is hopeful and then of course Pluto into Aquarius as well. A new Cosmic Human consciousness will be seeded. Your work is terrific.

After the crazy USA pluto return by 2025 neptune hits the USA IC (last time was the civil war ) also uranus progresses to the MC at this time (first time ever) so it seems like the USA as we know it now is totally dissolving ..maybe its states seceding ? hopefully not a blood bath ... If you have covered the inauguration chart for 2021 i would love to see it ..when i first looked at that chart i thought it was the seeds of revolution & for whomever is the president with that inauguration chart , it is the most aggressive & destructive inauguration chart i have ever seen .... maybe right now is just the beginning ?