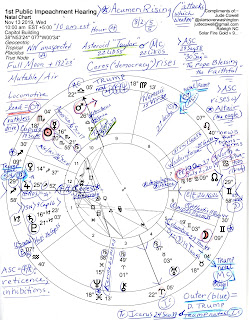 Image: A speculative '10:00 am' Horoscope for the 1st Public Impeachment Inquiry into Donald Trump scheduled for November 13, 2019, probably opening at 10:00 am est Capitol Building Washington DC. US diplomat to Ukraine William Taylor is expected to present a damning case against Donald Trump--and note that personal name asteroid Taylor @22Lib53 sits atop the Midheaven ('MC'), the Goal Point of the chart and of the inquiry. Also at MC are starry Arcturus and Spica (the spike), and in L'Enfant's original plan for the District of Columbia, Arcturus represents the White House while Spica is the Washington Monument, or, the presidency as archetypally modeled for us by George Washington.

Asteroids America (10th house), Columbia (5th house), and Washingtonia (7th house--conjunct US natal Mercury Rx @25Cancer) are penned inside the chart as well; opposite Washingtonia is Hopi (ambush or prejudice) conjunct US natal Pluto Rx (1st house). The chart's Vertex @10Leo, a point of fated encounters, points directly toward Trump's natal 12th house Pluto (10Leo02), his Underworld planet and part of his natal midpoint picture of which to be afraid--Mars-Saturn = Pluto: brutality; rage, fury; murder; death of many people -Ebertin). As you know that Trump has already caused tragedies for many. That's his creepy, subversive Pluto in egotistical Leo.

Just crossed the 10:00 am MC is Trump's natal trio in Libra: Neptune-Chiron-Jupiter. He of the speculative ventures, fraud, and grand schemes of bubbly proportions (aided by his natal Mercury-Neptune square of fantasies, lies, inability to learn, and confusion). He's having morbid thoughts now (Mercury-Neptune = Saturn @16Cap23 in 1st house).

Lower right is marked transiting Icarus (who flew too high) @24Scorpio39--conjunct Trump's natal IC of Endings (round up to "25Scorpio" = "An X-Ray"). What is an impeachment inquiry if not an x-ray, a scrutiny looking beneath surfaces? As you see in the 12th house, Trump's natal South-Node-Moon conjunction has already risen so his next natal planet to rise is his 10th house Uranus (17Gem53) all the way over in the 6th house of this chart (unmarked). His North Node, then natal Sun in perverse Gemini soon follow Uranus, his guiding planet of chaos. And notice that the transiting North Node @9Can16 (conjunct hellish Hades!) still points in the general direction of the current 3 North Solar Eclipse ('PE" marked in red) with its 'news that transforms a situation'/'large plans are wanted--but don't get carried away' vibes (Brady), news that the first and other inquiries are certain to provide.

Now sprinkled around the outside of the horoscope, highlighted in blue, are a few of Trump's natal placements (June 14, 1946 10:54 am edt Queens, NY), plus, there's US natal Moon (We The People; the public) in 6th house with the Pluto-Chiron midpoint of Plutocracy @26AQ26 sitting atop it/us. I can feel the weight of plutocrats' boots on our backs, can't you?

Edit January 24, 2020: this month the Pluto-Chiron midpoint by transit has conjoined with America's natal Moon (We The People) in late Aquarius. Ouch. Exploitation and power abuse. Both perpetrated and experienced.

At 10:00 am "30 Sag" rises ("The Pope Blessing the Faithful"--and I'm sure he does) so let's not forget that a key player in Trump's so-called administration is pretend-AG Bill Barr, an ultra-right ideologue they say in league with Opus Dei. This gaggle of gangster kleptocrats surrounding Trump don't believe in democracy (asteroid of democracy, Ceres, is rising with passionate Eros, the piercing) so why are we allowing them to sabotage America? Besides, starry Acumen also rises with keywords: attacks which weaken and I sincerely hope that this and other political performances we're being 'treated' to these days bring a loosening of the grip around the necks of decent people the world over by global mob syndicates, networks of gangsters, bankers, corporatists, and other criminal elements banded together and now clawing and grasping for total control.

That my expectations for our nation's better future are very high, I know. But what better can a Child of the Revolution pray for?

Chairman Adam Schiff gaveled in at 10:06 am est. jc