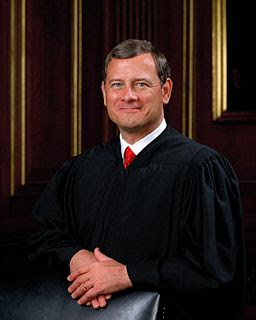 Although his natal horoscope is based on 'date without time' data (RR: X), you may wish to check out the natal horoscope of Supreme Court Justice John Roberts if you haven't since he will be the one to rule over the Senate impeachment trial of Donald J. Trump if there is to be one. Justice Roberts is said to favor protecting his reputation for non-partisanship and a Senate trial concerning Republican Trump will certainly provide an ultimate test of such a high-minded self-image--and I hope he's correct in his self-assumption because a balanced approach is imperative in this risky situation which must be American, not Democrat or Republican.

Born John Glover Roberts on January 27, 1955 in Buffalo, New York, John Roberts is an Air-Water Sun Aquarian with Moon in Pisces for the entire 24-hour period (Sun ranges from 7 to 7:30 Aquarius, Moon from 15 to 29 Pisces). This identifies his personality as an independent thinker and a humanitarian with a social conscience; he is intuitive, reverent, and eccentric. Somewhat gullible, Justice Roberts has a scientific bent and may be attracted to metaphysical or mystical subjects. Plus, he's sociable and friendly yet few people really know him. Sun AQ-Moon Pisces folk want to be of service to the world so presiding over a Senate impeachment trial is quite a significant way to accomplish this objective. His time has come, in fact, and there's much riding on this impeachment endeavor for Justice Roberts personally as well as for the nation and its future direction as a democratic republic vs a despotic monarchy. I say this after glancing at 2020 transits to his natal planets.

A few examples include the harsh Saturn-Pluto Conjunction @22Cap46 (exact January 12, 2020) with the two karmic planets taking turns opposing his 'lucky' Jupiter-Uranus Conjunction (both Rx @23--26 Cancer). Saturn opposes natal Jupiter once on January 17, 2020 and Pluto opposes natal Jupiter three times beginning on or about January 29, 2020. Transiting oppositions to natal Uranus will raise his chances for additional political, financial, and/or possibly legal battles and conflicts which may very well affect Justice Roberts personally (and not just as spotlights on the topics he deals with as a Chief Justice of SCOTUS). If he takes a wrong path now, the odds of future conflicts increase.

As for astrological factors during a potential Senate impeachment trial, we have no date to investigate so let's compare the planets of Wednesday November 13, 2019, the first public impeachment inquiry into Donald Trump's activities which apparently is set to open at 10:00 am est on Capitol Hill.

Of course, we have no houses for Justice Roberts without a birth time (12:00 pm is used) but three transits 'pop out' on that date--and note that the 3 South Solar Eclipse of December 26, 2019 manifests @4Capricorn upon the natal North Node of Justice Roberts, a major karmic indicator for him and for America (post contains an image of the 3 South Horoscope as well as the first eclipse of 2020 which occurs in tribal Cancer). Additionally, the 3 South December 2019 Solar Eclipse of 'traumatic transformation' conjoins and activates by degree the 11 North Prenatal Solar Eclipse of John Roberts. As I said, his time has come:

1. Sun @20Sco55 conjunct natal Saturn (20Sco16) denotes a time of serious situations that require trustworthiness, reliability, and probity. His seniority and past loyalty (to Republican objectives?? allegiance to Opus Dei?) can bring rewards, and current matters concern issues of authority and the senior position of others. Of course, this refers to his nibs and may also involve various culprits mired within Trump's Ukraine and/or other abuse-of-power capers, scandals, and deceptions. (And note that 20 Scorpio is the natal North Node degree of SCOTUS (1789), a karmic link to John Roberts' Saturn.)

2. Mars @26Lib11 conjunct natal Neptune (28Lib14) suggests a period when frustration is a potential due to others misunderstanding the Justice's methods or objectives, confusion and deception will (attempt to) undermine circumstances, unrealistic or deceptive enterprises are not favored, and issues involve matters of fraud, bankruptcy, charities, drug-trafficking, criminality, and/or penal institutions.

3. Pluto @21Cap03 opposes natal Jupiter (23Can20 Rx and conjunct Trump's natal Saturn) indicates that his best course will be to keep his aspirations on hold especially in relation to politics, and that titanic forces will block him in a power struggle which has huge consequences.

The Pluto-Jupiter opposition influence can at least partially describe the entire political process of a Republican Chief Justice who apparently possesses a social conscience attempting to protect the reputation of the Supreme Court (1789 chart shown) while fairly presiding over a Senate impeachment trial of a shady president with Republican partisans yapping at his heels in a desperate bid to hide their own crimes, foreign ties, and vulnerabilities.

And hopefully transit Neptune Rx @15Pis58--conjunct Achernar, star of crisis and endings--isn't floating too near the natal Pisces Moon of Justice Roberts for this can denote all manner of mysterious potentials including hidden threats to family members.

But surely a desperate Trump and the anti-government GOP wouldn't stoop that low to save their sorry bacon, right?

More personality details may be found in Sun Sign-Moon Sign, by Charles and Suzi Harvey.