Partners in Crime: A Presidency of One no more

February 5, 2020: With the Republican Senate's vote to exonerate scofflaw Trump set for this afternoon (4:00 pm est), if accomplished it will then be official - the Republican Party is made up of culprits complicit in the crimes of Donald Trump. Partners in crime, as the saying goes. And it looks to me as if this coming together of scoundrels, codifying lawlessness into law, shows in the Inauguration 2021 Horoscope (below) for as you see in the dual charts, unlike Inauguration 2017 with only the POTUS Sun in the 10th house of Career and Public Standing, the victor will also have Saturn, Jupiter, and Mercury, all in Aquarius, all handmaidens to the POTUS Sun: 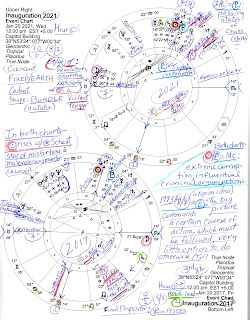 Now I haven't yet compared the natal planets of all possible scoundrels who could be represented by the three 10th house planets (2021) but it did occur to me to check the planets of Stephen Miller for any natals in Aquarius. Miller's natal Jupiter Rx @9AQ36 is there in 10th house just beyond 2021 Jupiter (7AQ22--conjunct US natal South Node of 1776) so if Trump commands the Oval Office for a second term, we may find bigot Miller whispering in his ear once again--and, as the Cosmos would have it, Miller's Jupiter Return perfects on January 29, 2021.

As for the three Aquarian planets of Inauguration 2021, here are a few brief potentials for each placement:

Saturn in AQ suggests ambitious plans with no sound foundation, eccentric expectations, and/or a reliable partner.

Jupiter in AQ implies comradeship (!), self-willed individuals, and/or indecisiveness (so many options!). Note that Jupiter can represent a financier (donor), CEO, politician, priest-minister-guru-mentor, and/or The General.

Mercury in AQ suggests reforms, inventions, a desire to work alone, and/or Utopian ideals. These ideals may be supported by the rising Mars-Uranus conjunction @7Taurus and its tendencies toward revolution, anarchy, explosiveness, and/or expressions of a violent temper. Potentials for this duo include radical reforms in the military, unplanned military actions, groups that exploit energy resources, modernization of the steel industry, security forces used to control strife (police state vs We The People?), rebellions against modernization efforts, and/or outbreaks of hostility (Munkasey).

Plus, you see an impulsive We The People's Moon rising at a critical 29th degree of Mars-ruled Aries. Sun AQ-Moon Aries: "Robin Hood and his band of merry men outwit the evil King John once again"..."A court jester mocks the social injustices of the realm" (Sun Sign-Moon Sign, the Harveys). Well, evil is definitely in the house, I'd say, at work in the behind-the-scenes 12th house of Politics, Large Institutions, and Karma.

Well, I don't care to type anymore on the topic of Inauguration 2021 until we're closer to it and the November 3, 2020 Elections are over--whenever that will be. Besides, the Electoral College is scheduled to vote for president on December 14, 2020--the very day of a 4 South Solar Eclipse.

Now I wonder who scheduled that?

i been looking at this inauguration chart along time and as you say it makes alot more sense now that we are seeing how the republicans will do anything trump says no matter how illegal ,immoral whatever ... that saturn sun pluto square we the people moon conjunct revolutionary mars uranus ....(and that the moon is moving into it so by progression in 7 months in will be intense ) .. Its deeply disturbing an suggests a very unpopular president ,stolen election ? ..its not like trump would step down if he lost an election ( he would claim it was rigged ) & now we know the republican party would happily highjack democracy for their furor ..as we have seen they wouldn't think twice .. But as you suggest I should probably hold off of negative assessment until things pan out a bit ha ha

Interesting to see this as I just saw Michael Bloomberg's chart and he has an Aquarian stellium, Venus, Mercury, Moon and Sun. And his secondary progressed chart puts Jupiter progressed conjunct Mc progressed in Gemini opposed to Moon conjunct the nadir. His birthday is within the week on February 14, 1942 at 3:40pm Brighton, Maine.

demejoyce thanks, I do think Michael Bloomberg could best Trump and the fact that he must know Trump secrets from their NY days would be an asset if a dirty one. Because unfortunately 'dirty' is the only way to vanquish a street fighter and bully like Herr Spanky. jc