Election Day: November 3, 2020 but the Real Deal Is Sealed on December 14th

As it now stands, the 2020 Electors will vote for a new president and vice president or will re-elect the incumbents on December 14, 2020. And as synchronicity would have it, a Total Solar Eclipse perfects @23Sag08 on that very day at 11:16:26 am est so the horoscope below is set for that date, hour, and the Capitol Building Washington DC in lieu of an accurate time and location for the Electoral College vote; please enlarge the image if you wish to read my scribbled notes: 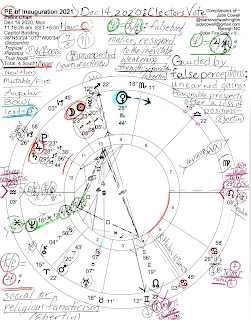 As you see from the title on the above image, this chart shows the Prenatal Eclipse ('PE') of Inauguration 2021 which falls within the 4 South Saros Series; however, it is not the PE of Election 2020 (that would be the 4 North in June 2020). Themes of 4 South are on the difficult side: 'strong emotional feelings concerning money and/or relationships; sense of fatedness in relationships or of being caught up in events beyond personal control; a sudden desire to end relationships; emotions may be blocked or checked causing a great deal of frustration; there may be anger or lust, and for best results, rash action should be avoided until issues settle down' (paraphrasing Brady's Predictive Astrology). The last 4 South eclipse occurred in 2002 @11Sag54; the initial eclipse in this series manifested on March 19, 1624 @29Pisces; therefore, for more depth of information the Sagittarian energies of the December 2020 eclipse can be viewed or filtered through a Pisces (Jupiter/Neptune) lens--double Jupiter which suggests the possibility of staged or feigned performances (Munkasey). Personally I tend to call such performances 'politics'.

Now voting planet Mercury @20Sag05 conjuncts South Node (see edit, below) and accompanies the eclipse in 10th house of Goals, Career, and Public Standing, and the Moon-Sun-Mercury trio ropes in Trump's natal Moon-South-Node conjunction, as noted. And as you know, a Moon-SN conjunction suggests a person with bad timing who has trouble doing things in the right way, and who tends to alienate others. It reveals a karmic condition due to the past mishandling of wealth, position, and popularity. Trump's opposing Sun-North-Node conjunction helps to uplift the depressive qualities of his 'estranged from mama' Moon-SN but who really knows how often his nibs sobs when he's all alone.

Actually, the planets form a BOWL shape with the 9th house Venus in Scorpio leading the tilt and denoting 'advocacy of a cause' or the 'furtherance of a mission' (Jones). If Venus leading the other planets could signify a lady candidate in Big Business Scorpio, perhaps Senator Elizabeth Warren is suggested.

As for the Electoral College, I can't say how they'll be persuaded to vote but I can say that there's an awful lot of Trump planets linked to this horoscope, some of which are penned around the chart. There's no space to pen on his speculative, overblown Neptune-Chiron-Jupiter trio (5--18 Libra) but it snugs around the 8th cu$p of Corporatism and Debt. Plus, you see the 1st house Neptune @18Pis13 rising yet intercepted which is apex of two midpoint pictures penned on the chart and highlighted in green. Now interceptions are somewhat controversial and some astrologers don't use them at all (using a different house system sometimes removes them all together). But I think of them as indicating karmic conditions and/or something hidden which must be dealt with and in this case, it relates to victim-savior issues (Virgo-Pisces axis) with karmic Neptune strong in its own sign of Pisces and apex planet of multiple T-squares which place much pressure on the nebulous planet of fraud, deception, dissolution, disappointment, loss, glamour, and/or spirituality. Neptune also represents propaganda, the masses and mass media as well and a 1st house Neptune supports the eclipse theme of 'caught up in events beyond personal control' as noted, above. Of course, water, gas, oil, or other liquids or toxins may be involved with large events (exs: storms or floods).

Politically speaking even a very large Blue Wave may be represented by an active Neptune which could hopefully make it more difficult for the Electoral College to vote against the popular candidate as they did in 2016. Of course, much depends on how well Republican cheating tactics work this time around and many things can happen between now (September 30, 2019) and December 14, 2020, even impeachment but I'm not counting my chickens on that score, partially because too many rats would have to scurry into the spotlight if the Trump yacht sank.

Now another negative factor in the horoscope is that social and religious fanaticism is suggested by a midpoint picture conjunct the 12th cusp of Politics and Karma: Saturn-Pluto = Jupiter, ruler of the eclipse bwo Sagittarius. And when a solar eclipse is in Jupiter-ruled Sagittarius it's important for best results that energies be focused, not scattered, a search for truth is engaged upon, and motivations are aboveboard. Karmic progress cannot be made if misplaced idealism and/or erroneous beliefs are the guides under the influence of a Sagittarian eclipse (Lineman). These are often the very sorts of things that 'wild card' eclipses tend to uncover whenever society sorely needs a change of direction.

Then as you see, ascending in the chart is Trump's natal Descendant @29AQ (Partnerships) and he's in the midst of a Nodal Return when new alliances tend to form and fortunate contacts may be made. At Midheaven ('MC'; @12Sag22) is what many astrologers use for America's natal Ascendant, and with North Node in 4th house (US natal 7th house), we may expect an emphasis on the Homeland, Domestic Scene, Family Members as Partners, and/or Roots. Real Estate and/or the Mining Industry may also be in focus and opposite, there's potential for someone prominent (10th house) to lose (SN) their social position or career (MC).

And yes, there are several other cosmic links to Trump's natal planets but I have no wish to spotlight all of them because it's making me feel fussy just looking at the chart. Yet mention must be made that the 4 South eclipse perfects quite near Trump's natal Moon-South-Node conjunction so that secrets from his past may be illuminated as eclipses will do (tiresomely, I know, since there have been so many revelations already) via leaks, reporting, investigations, lawsuits, or, as it turns out, whistleblowing.

And of course this is a South Node eclipse so energies tend to drain from conditions and events possibly suggesting the exhaustion we all feel after years of resisting Trump-style destruction and his Geminian duplicity and constant tweeting.

Oct 20, 2019 edit: I neglected to add that Mercury conjunct South Node suggests persons or people who are mentally alone and cannot gain support for their ideas or plans, one who speaks out at the wrong time or in the wrong place, is not listened to, has ideas ahead or behind the times, may have ideas or plans stolen or plagiarized, and/or is able to escape the "pitfalls of popular opinion" (Sakaoian and Acker); positively Mercury-SN may denote an independent person with original ideas.

Yet there's one thing we know for certain for those with ears to hear: that truth will always have its own ring!

Looking ahead here are the Inauguration 2021 Midpoint Pictures. Glancing back to 2016, the Electors voted on December 19th for con artist Donald Trump. Didn't they know he's a gangster? And here's a nostalgic post concerning the cosmic conditions on that December day in 2016 when we were all much younger and sooo naive.