March 16, 2020: Well, here it is, the DC Horoscope of Autumn Equinox 2020, timed by the moment the Sun reaches 00Lib:00:00 on Tuesday September 22nd at 9:30:31 am EDT with Scorpio rising in DC. Chart-ruler Mars (co-ruler Pluto) makes two applying aspects in the chart, a square to Saturn (1A36), then a square to co-ruler Pluto (4A27) and of course, a Rx chart-ruler ups the chances of delays and difficulties, temporary though they may be: 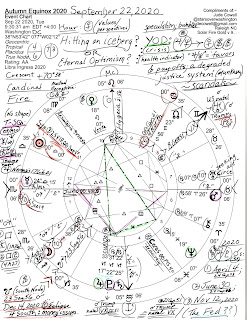 As you can see, 6th house Mars is retrograde and symbolically moving back toward opposition with rising Mercury in Libra (24:15) suggesting that previous debates will continue (opposition exact September 24th at 6:53 am) but the two dynamic squares from Mars are what take precedence as to how things will proceed. Note that the Sun @00Libra conjuncts America's natal Midheaven in our nation's late afternoon chart (July 4, 1776 5:09 pm LMT Philadelphia, PA) as is the case every year. Significantly, this particular Autumn Equinox chart contains the November 3rd 2020 Election--assuming that voting goes on as scheduled, even with the fly in our ballot ointment being voting planet Mercury stationing and changing direction on Election Day and possibly suggesting changed minds if not machine glitches and/or hacking. So how will things proceed within Autumn Equinox 2020 conditions?

According to chart-and-Equinox-ruler Mars, forceful in his own sign of Aries and in 6th house of Service and Health, a square to restrictive Saturn (still strong in his own sign of governmental/business oriented Capricorn) indicates frustrations, delays, and difficulties aggravated by Mars Rx, as noted. Resistance to authority, bad timing, and threats are potentials and patience is necessary for these conditions are only temporary and should clear up soon after Mars turns Direct on or about November 14th.

However, transit Mars goes on to square powerful Pluto, the wealthy, stealthy manipulator, and karmic conditions ramp up as intense power struggles are engaged, jealousy may rear its ugly head, and motivations are of a vengeful nature. Some form of destruction is evident, military battles are a possibility, and anger turns to rage as past actions interfere with current progress. Various plans may have to be delayed yet if this forceful Mars-Pluto energy can be positively channeled, much can be accomplished. Whether with positive or negative results depends upon motivations of the people involved including opponents.

Now there are several other chart factors of note in this chart but since I'm feeling rather fussy tonight, I shall leave many of them for you to discover and, if you wish, leave your on-topic comments with this post.

Yet for anyone desiring more information, here's some concerning the 4 South Prenatal Solar Eclipse of this Equinox (Eclipse @00Can21 conjunct 9th cusp). Or if you're wondering about the upcoming Solar Eclipse that the Autumn Equinox 2020 South Node (@23Sag56 in 2nd hou$e of the National Treasury) points toward--and allows for potentially draining conditions of resources--check out the 4 South eclipse themes that conclude 2020 in December on this handy list. Also, see lower right for dates of the three-fer Jupiter-Pluto Conjunctions which suggest ongoing actions taken by the Federal Reserve, plus, large projects by movers and shakers. Oddly enough, we might wish to note that the November 12th conjunction @22Cap52 (not '21:51' as erroneously scribbled) conjoins head-on the natal Vertex of Donald Trump (22:51). Can he turn things to his advantage as he so often does? We'll see, especially with his lucky Jupiter-Uranus trine.

Meanwhile, my friends, we can say that Autumn Equinox 2020 is full of financial and economic indicators seen in part by a problematic YOD pattern (see upper right) of crisis or a turning point (full of karmic opportunity) between money planets, the speculating pair of bubbles, inflation, risk-taking, and grand financial schemes--Jupiter and Neptune (sextile here but conjunct in the 1792 NYSE Buttonwood chart). Plus, there's values planet Venus @18Leo07 in the visible 10th house, so some new perspectives concerning upcoming conditions of change and fluctuation which are also suggested by a 2nd hou$e Moon in Jupiter-ruled Sagittarius--will be in order by September or probably before considering the mess we're already in with global shutdowns and financing. Unfortunately, US currency issues are possible so perhaps it's crazy to think it but a measure of Venusian diplomacy could be on America's menu, led by--a woman?!