Can the Past Inform the Future? Let's Consult the Georgia Guidestones

About three years ago a Steemit post appeared: The Georgia Guidestones and the Depopulation of the World which, despite its conspiracy theory implications, might actually make sense to many folks these days as the Covid-19/coronavirus contagion rages through society and Trump's apparent embrace of 'herd immunity' as a tactic. This amounts to a kind of a passive-aggressive way of "fighting" our "invisible enemy," as he calls it, and results in depopulation via 'thinning the herd' by letting the weaker citizens among us languish and die.

Now on several levels, this is a belated post for when I originally published the Horoscope of the Georgia Guidestones' dedication ceremony ("in the morning" of March 22, 1980, near Elberton, GA--I use 11:00 am since 'seeing/unveiling' Mercury in secretive Pisces is at Midheaven, the most visible point in a horoscope), the idea of depopulating the Earth of millions of people--advice listed on the Stones--seemed preposterous and certainly psychopathic. But now it's 2020 and the fact is, world "leaders" behave in psychopathic ways quite often--and with Trump it's multiple times per day. For as you know, his natal Mars rising opposes US natal Moon (We the People) so he considers the American people as little more than targets and enemies for him.

So in consideration of current events, I'm publishing here for the curious a marked-up Horoscope of the Georgia Guidestones in a bi-wheel with America's natal horoscope (July 4, 1776 5:09 pm LMT Philadelphia, PA) in the center. No chart factors are noted - except that details of the 1980 planets as transits to the US chart are penned around the bi-wheel (please enlarge the image if you wish to read them!), plus, a few of Trump's natal planets (and his IC @25Scorpio) are listed in blue. For the most part, red = 1980, green = US natal.

So if the secretive intentions of the Georgia Guidestones for and against America and the American people are of any interest to you, consider the following transits of 1980 in light of current conditions which the suspicious among us could take as the dawning fruition of a dastardly depopulation/control plan designed by a powerful secret organization now using Spanky Trump as their figurehead 'to get the job done': 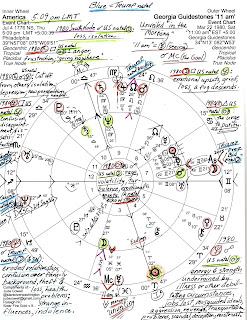 Of course, other planetary transits may be noticed as well so if you wish, leave your on-topic comments with this post. And do Share if you Dare! jc

Trump is preparing the ground for a totalitarian dictatorship -- but we can stop him by Lucian K. Truscott IV, Salon via Alternet

Trump's idea to let the coronavirus contagion "wash over" the population of the US is what he's been doing anyway by slow walking needed medical supplies, commandeering supplies ordered by the states, failing to make widespread testing available, and other sabotaging activities (non-activities). Clearly, vicious star Algol atop his natal Midheaven (The Goal Point) is expressing starkly within society: 'piled up corpses', according to Chinese star lore.

So has he made America 'great' yet? jc