Democracy For Who? Do The Poor Have A Say? - Thom Hartmann (plus Ceres!)

Here's a June 16, 2020 clip from Thom Hartmann concerning a timely societal topic which contains within it many thorny and related issues:

In Mundane Astrology I tend to use asteroid Ceres as a marker for democracy, aka, Democracy. However, these days, America's fabled streak of Plutocracy has grown wider than ever and we find that on July 4, 1776 our Ceres Rx @8Pisces41 conjoined the 1776 natal Pluto-Chiron midpoint with the midpoint's plutocracy, exploitation, primal violence, and racism implications now coming to fruition across the land. And where is Ceres in transit as I type? At 11Pis38 which suggests that in 2020, America is actually in the midst of a three-fer Ceres Return due to the asteroid's retrogradation.

Exact dates of America's current Ceres Return/s are: May 28 (passed obviously); August 14; and December 20, 2020, the last a significant date for other reasons. Hopefully by December, solutions may be found, presented, or even implemented to address at least some of our nation's thorny issues within the realms of Ceres.

This may be possible since a Ceres Return spotlights our national Ceres concerns (in compassionate Pisces!) such as nurturing, home and family, parenting, food supplies (food chains), agricultural concerns and practices, protective instincts, and democracy with a cosmic laser beam to be dealt with in 2020 and, hopefully, to result in improvements for the population of our country which, whether Republicans and other selfish Ayn-Randers like it or not, includes the poor, elderly, ill, and weak among us. Even our Voting Rights are involved since office holders determine how We The People are treated or mistreated, how funds are allocated for the care of our people in need - and to 'promote the general welfare'. And yet as we see since 1776, the nation was set up from the start with the plutocrats in charge.

To close, here's one of my drawings of a protective mother and child: 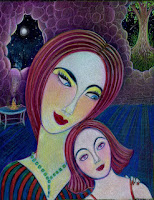 Image: 'Ceres and Persephone'; pencil on paper by Jude Cowell.