Riots Across America and a Summer of Eclipses

In June 2019 we took a look at the 3 South Solar Eclipse of December 26, 2019 (shown below) with its themes of 'traumatic transformation through news received or short journeys undertaken' and 'sudden endings of relationships or associations'. Few would disagree that changes since then have been traumatic and separative, and recently we're hearing more and more public figures speak of "transformation." Perhaps you've heard them say this, too. 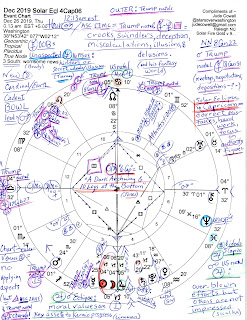 Naturally, astrologers tend to think of astrological Pluto when it comes to concepts such as transformation by which nothing stays the same. These days we're having a more generous helping of intensity via a boost from the planet of shocks and sudden events: erratic, radical Uranus, now in money sign Taurus and stirring up chaotic conditions as he lurches along.

So considering the current protests, riots, unrest, disruption, violence, and general turmoil in society my suspicion is that the transiting midpoint of Uranus-Pluto in mid-Pisces, opposing the mid-degrees of Virgo where Uranus and Pluto conjoined three times in the mid-1960s, is responsible for some major 'stirring up' of such restless and revolutionary energies of civil unrest and revolt. You, dear reader, may disagree about their midpoint, but there it is.

Now with Pluto plodding through Capricorn, we see startling transformation within the Saturnian realms of government, law, business, and investment. Three conjunctions with Jupiter, planet of expansion and increase, all through 2020 ups the significance and depth of Plutonian changes as Plutocracy (Jupiter-Pluto) makes a stand against massive pushback from We The People.

Then, warming up Summer 2020 are two Lunar Eclipses. One has already occurred on June 5th @15Sag34, in first house of late afternoon US Horoscopes (July 4, 1776) that show Jupiter-ruled Sagittarius rising. But soon comes a second Lunar Eclipse, a sort of 'birthday eclipse' for America for it perfects on July 5th @13Cap37 - an 'eclipse' of America's natal Sun (13Can19). This involves two fixed stars of note: Sirius, the scorcher, and Canopus, the star of old age.

But the most scorching heat of Summer 2020 may arise (between the two Lunar Eclipses) from the Summer Solstice 2020 Solar Eclipse in the 4 North Saros Series (chart shown). By degree this eclipse echoes the transformative 3 North Solar Eclipse of Summer Solstice 2001 @00Cancer, one of the four critical Cardinal Points of Manifestation upon which eclipses (those 'wild cards of the Universe') tend to spur some measure of global events. Yet since 00Cancer is known as 'the gate of life' degree, can we expect improved conditions running in the background of society under the influence of the Cancer Solar Eclipse as opposed to the difficult 2019 Capricorn Solar Eclipse, both falling across the Cancer-Capricorn security axis? By theme, it's doubtful since 4 North themes include potentials for 'restraint, restriction, misjudgments, and illusions'.

That is, unless 4 North's 'restrictions, restraint, and misjudgments' should refer to, disrupt, and/or somehow transform the bad actors and rotten apples now disrupting the American barrel as they act under the illusion that our country should belong to authoritarian despots and criminals instead of to We The People!

For more on eclipse themes you may wish to see Predictive Astrology by Bernadette Brady. In fact, I highly recommend it. jc