June 2, 2020: Considering the current unrest and turbulence in our nation with National Guard troops ordered or threatened to be ordered to various cities across the land - and with a vision of Trump hunkered down in a bunker - an updated post on the Fascism Rising Solar Eclipse Horoscope of 1933 may be of interest. Learning from history so as not to repeat mistakes is a grand thing if it can be accomplished! Unfortunately, given the speed with which America has been sabotaged by authoritarian entities and with martial law and dystopia potentially on the horizon, it seems at this point that the fascist types are the ones who have learned from their mistakes and improved their tactics.

Yes, it is depressing but as progressive author and broadcaster Thom Hartmann always says, Despair is not an option. Thom also says, Democracy is not a spectator sport, so get out there! and finally, Americans are doing just that, taking to the streets, but with the predicable result that paid operatives and anti-democratic thugs of the klannish persuasion are apparently among the crowds in order to stir up violence and destruction, discredit the protests, and give government a justification for clamping down (when we're already under lock down!). The use of subterfuge against We The People, a time-honored tactic of Uranian-Plutonian types, reveals the saboteurs' plan to institute military control of the population thereby completing their government coup and keeping demagogue Trump throttling the helm of the White House. See or review Summer 2020: Uranus-Pluto and Crisis. And note that America's natal Sun in Cancer (July 4, 1776) will be 'eclipsed' by the Lunar Eclipse of July 5, 2020 which is basically the cosmic gift of an eclipse for our national birthday.

Hopefully, the implied changes of direction inspired by the three Summer 2020 eclipses, although turbulent, will turn America toward a more positive course and any secrets or inconvenient facts revealed will uplift democracy, not reduce it further. This, in addition to the fact that the critical Summer Solstice 2020 Eclipse @00Cancer contains potentials for the entire globe.

US Mars the Warrior in Our Turbulent Times

Astrologically, on one level we see these fiery conditions and perversions of goals and actions via US natal Mars turned retrograde by progression since 2006 (when Bush-Cheney 'broke' the military, as I've typed in previous posts of that era). Certainly the symbolic (SP) inward subversion (Rx) of America's Mars' energy, motivation, and action principles aren't what they once were when Mars progressed through the years in forward motion. The concepts of social and political regression (Rx) come to mind as favored by the Republican hierarchy (and others!) who seem determined to regress America back to the 1860s. Led by figurehead Trump, they're attempting now to re-fight the Civil War for they prefer that relic of a bygone era, the Confederate Constitution of 1861 (horoscope shown is timed by the day's New Moon @20Pis59--where transit Neptune is as I type, and there's venal Venus @5Pis18, the degree of the Fascism Rising Eclipse!).

For as you know, in 1776 our country began with Mars in Mercury-ruled Gemini: ready for action, mobile, able to do multiple things simultaneously, yet admittedly on the quarrelsome side, and not always honest in duplicitous Gemini. Now with SP Mars Rx in Venus-ruled Libra, America's motivations and actions depend upon emotions and feelings which often spark conflict rather than the teamwork that could benefit all sides. But radical Utopian zealots don't care about 'all sides', only theirs, and that, to collapse civilization. So perhaps you've noticed that US Mars SP (secondary progressed) conjoins the natal Jupiter of Herr Trump with his constant refrain of, "It's not fair!" However, his multiple personality flaws can only see 'fair' as everything tilting his way which does not provide the balance the American people prefer. And as you know, the hastiness, ambition, and erroneous judgment inherent within a Mars-Jupiter contact have been repeatedly demonstrated during Trump's 3+ years.

And yet the true heart of humanity is shown as peaceful solidarity marches in foreign lands have been inspired by the cruel murder-by-police of George Floyd in Minneapolis, MN on May 25, 2020. Thank You World!! For many people abroad can see America's predicament clearly for what it really is yet approximately one third of us cheers on its brutality! General Smedley Butler would not be proud. btw: so far a search of SO'W for my previous posts regarding the July 1, 1933 fascist coup attempt has shown that related videos and links I posted in the past have been mysteriously deleted. However, I have located a recently published video (8M 6s) on the topic Smedley Butler and the Business Plot which is what the coup attempt of 1933 is often called. Because predictably, corporatists and big bankers, driven by fear of FDR's New Deal programs, were the primary culprits (then as now), along with idealists with skewed, brutal perspectives against humanity. (Now that Venus, planet of of perspective, evaluation, diplomacy, and relationship, is back in bounds of the earthly plane, perhaps attitudes of some will improve, although Mercury remains OOBs for now and will turn Rx June 18th.) Still, I must type: it was evil then and it's evil now. After all, recognizing evil when it confronts us is key to facing monsters and vanquishing them! 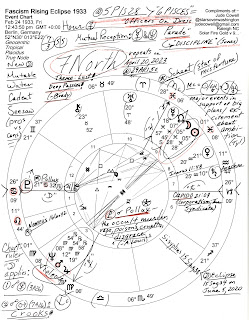 Above Image: 'Fascism Rising Solar Eclipse' 5Pis29 Feb 24, 1933 12:43:50 pm GMT Berlin, Germany; two interlaced YODs (Finger of God pattern = special tasks, crises, turning point, crossroads, major adjustments, and a potential for karmic progress; apex Jupiter at base of a Venus-Uranus sextile; apex Venus at the base of a Jupiter-Pluto sextile); a fanatic Uranus-Pluto square is in force; the Pluto-Chiron midpoint (plutocracy of oppression; exploitation; disenfranchisement; primal violence; fascism; corporatism; communism; socialism; militarism; totalitarianism; racism; nationalism; 'patriotism'; propaganda, etc) @22Gem42 conjoins the karmic 12th cusp of the 1933 eclipse (in Berlin) and also conjoins US natal Mars (military and police forces; you decide its levels of meaning since upheavals were occurring in the US as well--then as now, Great Depression then as now.) And of course on July 1, 1933, months after FDR was sworn into office for his first term, an attempt began to convince retired General Smedley Butler to lead a coup attempt against President Roosevelt on behalf of fascist saboteurs with thousands of (retired) troops of the American Legion allegedly willing to man up. Would they have done this? I don't know but one of the conspirators who approached Butler was an American Legion leader.

So the 7 North Solar Eclipse of 1933 contains themes of 'deep passion long hidden' and 'lust' (Brady) - one assumes lust for power and control (see power-mad manipulator Pluto rising with starry Pollux!). And of course the same themes will surface in 2023 as the next 7 North Eclipse manifests @29Ari50, a critical-crisis 29th degree--straining to enter Taurus, sign of intolerance and greed (negatively speaking with no aspersion to be cast upon enlightened Taureans of our day!) So as you know, the 00-to-1 degree range of bullish Taurus is thought by some such as myself to be degrees of violence due to the fact that it's Adolf's natal Sun degree and was transited (triggered) each time he committed acts of violence. And being his Sun that was triggered, naturally his out-sized, off-kilter, touchy ego was involved.

Remind you of anyone in particular?