Monday October 10, 2011: This week the US Congress gavels in on Tuesday October 11, and the president's jobs bill may be taken up--not passed, for that would make too much sense--but 'taken up' on Capitol Hill with President Obama seen by some as pushing his financial plan as bank protests grow.

If the jobs bill will bring relief to the 99%, let him push! And let the politically minded GOP get out of the way.

Meanwhile, peaceful Occupiers in Washington DC are on shaky ground with their permit expiring today and no one seems to know what will happen to protesting Americans who are also speaking out against US wars which were begun with falsehoods and have gone on for way too long.

Today protests against America's corrupt capitalist system begin their 4th week on Wall Street (live video below) as other cities across the country join in including Kansas City where the people know what you and I know that, Corporations Are Not People.

The Light of an Aries Moon with a Jupiter/Pluto Midpoint

A Full Moon @ 18Ari24 on October 11, 2011 represents the culmination or fulfillment phase of something begun at the last New Moon of September 27, 2011 @ 4Lib00 (horoscope shown) which emphasized the ongoing opposition of string-puller Pluto to US natal Jupiter 5Can56.

(During the Great Depression, transiting Pluto conjoined America's planets in Cancer; now Mr. Underworld has changed his tune and opposes our Venus, Jupiter, Sun, and eventually our Mercury Rx, too, as efforts continue to dismantle and dissolve FDR's New Deal programs. Apparently global bankers such as the Houses of Rockefeller and Rothschild were on board with the Roosevelt presidency's financial policies but now they're working hard to harvest the last decades' abundance away from the American people--and so far succeeding too well.)

The Occupy Wall Street protests actually began on Sept 17--ten days earlier than the September New Moon. Astrologer Lynn Hayes has written an excellent article on the movement's genesis which she calls the Beginning of Uranus/Pluto in the US, a reference to the current Uranus/Pluto square in their cycle which issued from their Great Conjunction/s of the mid-1960s, a time of social upheaval and the anti-war and civil rights protests of my generation.

The 1960s mid-Virgo Uranus/Pluto conjunction may be found in the 4th house (Foundation; Basis of the Matter) of the Full Moon horoscope you see below.

Click to enlarge the chart to read a few notes which won't be covered in this text. 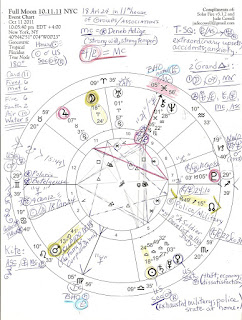 ASC 29Gem39 (29, a critical/crisis degree) makes 5th house Mercury 27Lib49 the chart-ruler; Hour: Sun 18Lib24, in its Fall in Libra and conjunct US Sec Mars Rx--'19Lib' = "A Gang of Robbers in Hiding (peep-eye, Wall Street!) Sun and Saturn are about to hook-up, a time of serious issues, hard work, and a call for responsibility for the culpable; Saturn opposing the Full Moon shows depression of the people, but can also indicate ambition and strategy being employed.

The speculator/wastrel/grand-schemes pair, Jupiter and Neptune, rule the MC through Pisces; restrictive Saturn rules 8th house of Shared Resources, Debt, Credit, and Transformation, with the degree of the 8th cusp 19Cap40 implicating the Great Conjunction/s of Uranus and Neptune (1993), the Illuminati/Enlightenment/NWO pair of energies.

In 5th house of Gambling and Risk-Taking, evaluating Venus 3Sco32 conjoins US *Sec Saturn Rx indicating the American people's (Aries Moon = 'I Am the People') fed-up condition (Full Moon opposition) and dissatisfaction with America's imperial wars (Sec Mars Rx) being waged abroad and the financial embezzlement, loss, and system-gaming they have engendered while lawmakers tell us US coffers are bare and domestic budgets must be cut (Venus/Saturn) with an austere hatchet when it comes to the needs of the American people.

How Things Proceed: chart-ruler Mercury applies to these planets and ASC:

Mercury also rules the Full Moon's 4th house of Real Estate and Domestic Scene, and the president's natal Pluto in Virgo. (I refer to Mr. Obama as 'president', and not to Speaker of the House Mr. Boehner who seems confused on the issue at times.)

As you see, rising in first house is the July 1, 2011 Solar Eclipse @ 9Can12 which falls within our nation's line-up of Cancerian planets--and precisely between our national Sun and Jupiter, a factor you and I knew would be trouble.

President Obama's natal, quixotic Chiron/Pluto opposition is in full view (MC/IC) and is notated upon the chart along with a T-Square (Pluto/ASC = Uranus in Aries ( = Utopians and other anarchists; Uranus also is The Awakener, as mentioned in protesters' chants) so we have a picture of extraordinary incidents and upsets, constant anxiety and restlessness, and potential changes of environment.

A Grand Trine which includes North Node (NN = encounters; meetings; future direction; publicity) ropes in the October 11th Full Moon along with a feisty Leonine Mars so that three pictures are formed:

1. Moon/Mars = NN indicates vigorous cooperation with others, and women as associates.

You may wish to click and view the participants in a rather involved Kite pattern with ASC as the Kite's 'tail', and Fixed Stars Polaris ('to show the way') and Betelgeuse ('success which is not blocked') rising and directing the Kite's high-flying inspirations and a prognosis for success.

Of note to current financial topics and other large endeavors is a Minor Grand Trine (highlighted in pink) if one includes Midheaven (MC = Goals; Aspirations), an angular point where Jupiter/Pluto (in trine) may express the pair's big banker/wheeler dealer energies. This pattern creates a significant midpoint picture:

Jupiter continues his delaying Rx phase in Taurus, a money sign with a shadow side that includes greed and intolerance.

Well, moneybags Jupiter (Republicans) and manipulative Pluto (the dragon guarding the world's hidden riches, and robbing us all) are certainly simpatico (trine) this week and so far are quite successful in their Make Obama And America Fail campaign...their midpoint sits upon the Full Moon's Goal Point (MC.) But this means that Jupiter/Pluto also sits upon President Obama's natal Chiron in Pisces--and affects goals with the wounding--or talent--that Chiron, The Key, always provides.

And if you dare, check out the 'peculiar turn of events' potential in the horoscope of the upcoming Solar Eclipse of November 25, 2011 @ 2Sag37, a date perfectly within range of describing the recommendations from the 'Super Congress' (aka, 'Super Committee') which are due on November 23, 2011.