Just now this video clip appeared on YouTube with today's Moon sailing through Venus-ruled Libra, an Air (mental) sign. When the mundane Moon is in Libra, sign of justice and balance, the public mood tends toward an emphasis on unimportant details, co-dependence in relationships, a sense of fated unions, self-indulgence, and vivid expressions of feelings. I shall leave it to you to decide how unimportant NASA's plan to explore hidden caves on Earth's Moon may turn out to be while noting that exploratory Jupiter (who favors broadened horizons and new discoveries) is about to spend a year in the scientific sign of Mercury-ruled Virgo!

And here's a bit of Moon Art for you...Minerva's Glen, aka Owl of Minerva a pencil drawing by yours truly: 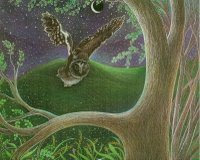