Pictured below is a previously published horoscope of the death crash of Princess Diana and Dodi al Fayed with details at Jude's Threshold (sans any recent updates.) 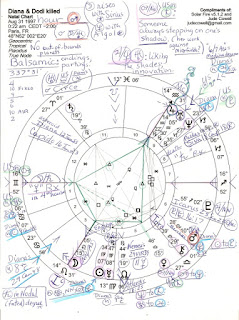 Princess Diana's land mines work has always seemed to me enough reason for certain entities to assassinate her and as the lady says in the video, above, Diana was about to begin humanitarian work concerning the plight of the Palestinian people.

However, recently I have come across another theory: that the real target was Dodi al Fayed--having to do with arms deals and Saudi Arabia which wouldn't surprise me in the least. Apparently both Diana and Dodi had multiple enemies willing to 'take them out' by whatever means necessary. At the time of their tragic deaths, a major transit of Neptune @27Cap was threatening an erosion or dissolution of power in the US as the nebulous, fraudulent planet insinuated itself via conjunction with America's natal Pluto Rx @27Cap33.

This erosion (which probably included monetary power with wealthy Pluto affected) was not being achieved by anarchy but by more subtle methods such as treachery, poison, contagion, or even religious and/or psychic and occult powers. (The suspicious alcohol blood level of the car's driver could be indicated here.) I remember how tears flowed in this country and across the globe over the untimely death of the Princess of Hearts just when she had finally found 'true' love! Or the illusion of it. And with Neptune to US Pluto, the melancholy tragedy was a perfect opportunity for religious leaders to appear all over TV multiple times over the next year or so.

Even now, I wonder: can any American deny that the United States of America is an 'assassination nation'? And this is Not how the Founders designed our Republic to be!