Here is a brief excerpt from a Mike Malloy broadcast concerning 2016 candidate Bernie Sanders and the Democratic Party:

In my files are two possible natal horoscopes for the Democratic Party. The chart you see here is set for February 17, 1801 (NS) 1:00 pm LMT Washington DC during Thomas Jefferson's presidency and I'm told that its pedigree is established via the Papers of Thomas Jefferson: 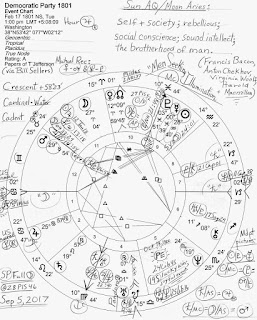 Another earlier version is the chart I have most often worked with which is set for May 13, 1792 (NS) 12:00 pm LMT Philadelphia, Pennsylvania. The 1792 Moon (We the People) conjoins our 1776 Moon in late Aquarius, an interesting synchronicity. You may find the 1792 chart and more details by visiting Neptune Cafe.