As you've heard from various sources, on July 28, 2016 murder charges were dropped in the Chandra Levy case as reported in this news clip. And here is a video with background information and a sad remembrance of her disappearance on May 1, 2001 along with events that followed, plus, a brief video concerning a retrial of the case:

It is said that Miss Levy had a "strong interest" in the Timothy McVeigh case and the Oklahoma City Bombing (chart, below), may possibly have been recruited by Mossad and the CIA, and that she was seated in the V.I.P. section for the George W. Bush inauguration. Sounds like Chandra Levy knew a lot of other people's secrets...

please enlarge the chart but if it won't, view it here. 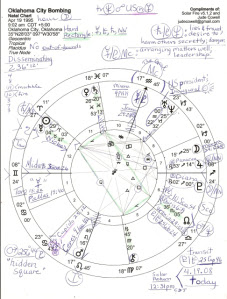 One prominent feature in the Oklahoma City Bombing horoscope is the Hard Rectangle pattern which triggers the opposition to act with more drive than it otherwise would – the added tension shows antagonism and a lack of compromise on all sides.

Born on April 14, 1977, Chandra's natal chart with her Sun Aries-Moon Pisces personality blend may be viewed at astro.com where her birth data is rated AA for accuracy.

Standing out is a Mercury-Uranus opposition suggesting that she could "incur the wrath of others" by demonstrating a know-it-all attitude, tactlessness, and/or a disregard for compromise. Naturally, a full assessment of her natal chart is needed to corroborate or discount the strength of her Mercury-Uranus opposition which conjoins her MC-IC axis (Taurus-Scorpio). Her romantic, moody, worrying, and restless Sun-Moon combination of Aries-Pisces is shared natally by three notables in my files though you may know of more: Dr. Richard Dawkins, Hugh Hefner, and MSNBC's Rachel Maddow.