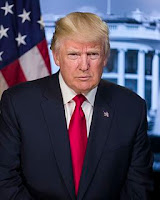 Donald Trump's private club Mar-a-Lago located in Palm Beach, Florida has more history behind it than I'd first imagined. Do you know the original construction of the grandiosity was completed in 1927? And that Mr. Trump finagled a lower price from the sellers via an element of trickery before he purchased the property? (Well, that one you could intuit, right? Sharp deal maker that he is and all.)

Curiously, year 1927 brought a manifestation of a Solar Eclipse in the 1 North Saros Series, the series we currently labor under since August 21, 2017. That occurrence of a 1 North is known as, 'The Great American Eclipse' and it 'eclipsed' Donald Trump's natal Ascendant @29Leo and occurred very near his rising Mars @26Leo. As you know, 1 North is called The Mother of All Eclipses because it is the first in the 18.6-year cycle of solar eclipses. In August 1999, a repetition of a 1 North acted as the 'Nostradamus Eclipse' prognosticated hundreds of years ago but more significantly the August 11, 1999 eclipse is mentioned in The Book of Revelation with its Fixed Grand Cross at mid-degrees of the Fixed signs: Taurus, Leo, Scorpio, and Aquarius...the Oxen Point, Lion Point, Eagle Point, and Angel Point.

So I have to say that 1 North Solar Eclipses are a big deal. As you know, the 1999 version helped to usher in the New Millennium and, according to Scripture, marks the time that the angels 'let go the winds of war'. Have you felt a difference in the Collective tenor these last 19 years? Certainly, US Politics and most of its purveyors cannot be trusted to act on behalf of We The People any longer assuming that they ever could be completely trusted to do so (founding plutocrats, etc). Foreign manipulators rule the day and elected/selected officials take their Oaths and their orders from a higher power than We The People which seems obvious to me if not to either of you. Meanwhile, Pluto marches on toward America's first ever Pluto Return in 2022, destroying and transforming structures, systems, and traditions as he creeps along.

Now the 1 North Solar Eclipse that occurred in 1927 on June 29th @7Cancer fell among America's natal Venus (3 Cancer), Jupiter (6 Cancer), and Sun (13 Cancer) with Jupiter being exalted in Moon-ruled Cancer, a business sign on the Security axis opposite Saturn-ruled Capricorn, sign of government and law. And of course it wasn't long before the Crash of 1929 wiped out the fortunes and lives of many people, investors and others alike.

So if you're curious, view the 3 North Prenatal Solar Eclipse that perfected in bullish Taurus on May 9, 1929 in the 3 North Saros Series and which will repeat (history rhymes, it doesn't repeat!) on July 2, 2019 @11Cancer with themes of: news that transforms a situation and possibly involves young people; worry, obsession, going overboard; large plans may be positive as long as people don't get carried away (Brady). 3 North, in its various manifestations through the years, is also the PE of John Quincy Adams, Andrew Jackson, the CIA, and the attacks of 9/11/01.