A Solar Eclipse for the MarchForOurLives Generation!

Here is some of MSNB's coverage and commentary concerning the MarchForOurLives Protest on Saturday March 24, 2018 on the streets of Washington DC and in cities around the globe. As a former resident of DC, this Flower-Power gal was totally impressed and heartened by the Millennial Generation's righteous activism as Washington DC saw the largest protest on its streets ever from radicalized youth who stood up and spoke truth to power!

And if we look back to the years 2000-2001, the years during which many of the protesters were born, we find a certain Solar Eclipse which perfected upon a Cardinal World Point of manifestation, recognition, and fame--the 3 North @00Can10 occurring on Summer Solstice 2001. Its horoscope set for Washington DC is displayed, below, with chart details penned messily upon it. As you see, this manifestation of 3 North is the Prenatal Solar Eclipse ('PE') of the WTC attacks of 9/11 and contains themes of:

That the 2001 manifestation of 3 North and its descriptive themes during that time affected children born with it as their personal PE seems obvious to me for its influence of violence and brutality (see Mars-Chiron-Pluto, in red) was felt within the general population during the time frame in which today's teenagers were born. They now express forceful resistance to the pervasive 'gun culture' of the United States as promoted by the NRA and are demanding common-sense gun legislation--otherwise, NRA-compromised politicians will be voted out in the 2018 Midterms by millennials old enough to vote in November 2018 and by younger millennials as they come of voting age in future years. And esoterically speaking, 00Cancer00 is the gate of to birth degree (with its opposite, 00Capricorn00, the 'gate of death' degree). 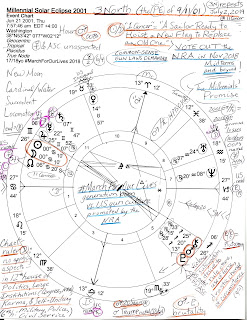 Now hopefully you might enlarge the horoscope for better reading since there's little if any point in my typing all the notes from the chart. But a few basic details include: Hour of an out-of-bounds Mars; chart-ruler Moon makes no applying aspects to planets yet there's her conjunction with the karmic North Node (6A10) denoting spiritual links and unions, and publicity; the weaponized Mars-Chiron-Pluto conjunction in the 5th house of Children (plus, Pluto-Chiron = Plutocracy). This is a forceful trio of brutality and violence with death-dealing Pluto (13Sag28) conjunct US natal Ascendant (Sibly), and transit Saturn, restrictive planet of karma and loss, approaching US natal Descendant, a Saturn-Pluto marker of the 9/11 attacks. And of course, we know that Dubya Bush and the Pentagon reacted to the 9/11 attacks with weaponry including bombs in the Middle East as they hid behind a manufactured pretext (or a false-flag op) for guiding the American people into endless war--and with the previously prepared draconian 'Bush Doctrine' infused with Dick Cheney's anti-constitutional 1% theory of strike first. We've been had, m'peops. You know, I know it, and the Millennial Generation must certainly know it.

And with America's natal Mars in Gemini retrograde in Libra by progression since 2006 in Libra, we've seen an increase in violent events on US soil as guns are turned toward the population in order, I believe, to undermine the Second Amendment which was created so that Americans can protect themselves against the government and to fight against a militaristic government take-over. Yet the NRA has turned the Amendment into a vehicle for their personal enrichment via massive gun sales.

Now in the chart with 27Can44 rising in Washington DC, we find US natal Pluto Rx on the Descendant angle. Vengeful Venus @14Taurus conjoins US Inaugural Ascendant (POTUS), and the planet of young people, Mercury Rx @22Gem52 (11th house of Groups) will return (Rx) to voice its opinions--in the streets if necessary. Around the chart you may be able to read a few listings of US natal planets which include the fact that 'little' Mercury the Messenger conjoins US natal Mars, planet of guns and shooters and denoting plans put into action--or in the case of March 24, 2018, into activism concerning guns and violence. Of course, we never have US natal Mars turn up without its problematic square to our natal Neptune in Virgo and there we have 'the fog of war' and the Pentagon's tendency for misguided, misdirected, and secretive plans and actions.

Of course there's much more information to be seen in the 2001 Solar Eclipse chart and I hope you'll search for it if you haven't previously. But one thing which must be added to this post--that a 3 North Solar Eclipse repeats on July 2, 2019 @11Cancer and falls among America's natal Venus-Jupiter-Sun trio. Therefore, 3 North themes will also repeat within the Collective in Summer 2019 (in time for America's 243th Independence Day) and I suspect that the 2019 Eclipse is a cosmic hint that the #MarchForOurLives movement and its common-sense demands will not be disappearing nearly as soon as the GOP, the few Democrats who are also financially compromised, and the NRA hope it will.

Neptune the Planet of Loss, Dissolution, and Deception

Oh and one more chart factor squished onto the right side of the chart--that 2001's Mars-Saturn midpoint (the death axis) @14Pisces01 has had transit Neptune activating it off and on of late and creating a midpoint picture of grievous losses (Ebertin), cover-ups concerning preparedness (Munkasey), and threats (Tyl) which I believe also affects the Republican Party in particular. Why? Because this is the degree of the Republican Party's natal Neptune (1854) which personalizes the picture and its potentials because it times the party's first-ever Neptune Return now in progress! It's a five-fer return (GOP n Neptune also @14Pis01!) in which the third conjunction perfected on March 6, 2018. The next will occur on October 20, 2018 (in time for the 2018 Midterms!), and the last on December 29, 2018, just prior to early January 2019 when newly elected congressional candidates take their Oaths of Office. SO if enough Millennials get out and Vote on November 6, 2018 they will 'be' the authors of GOP loss!

Isn't Astrology marvelous for its ability to uncover the hidden and link the past with the present and future?!!

Above Image: a drawing, Neptune Ascends