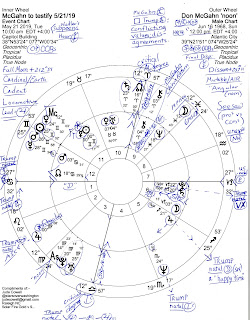 It is being reported that former White House Counsel Don McGahn will testify before Congress on May 21, 2019. Donald Francis McGahn was born June 16, 1968 and grew up in Atlantic City, New Jersey so his natal planets based on 'noon' of his birth date are placed around the 10:00 am edt horoscope, below, set for May 21, 2019 Capitol Building according to the subpoena issued by House Judiciary Committe Chairman Jerrold Nadler; please enlarge the image for better reading of chart notes if you wish; note that many of Trump's natal planets are penned around the chart with Trump's natal Uranus-NN-Sun trio missing for lack of space; both McGahn and Trump are Sun Geminis and McGahn's natal Sun @25Gem32 conjoins the 12th cusp of the 10:00 am edt testimony chart.

And as you see, Luna is chart-ruler and there's an applying Moon-Mars opposition (Mars "4Cancer" = "A Cat Arguing with a Mouse"..JUSTIFICATION--Jones) which denotes testy emotions and quarrels (plus, an angry public?), yet Trump's natal Sagittarian Moon (conjunct his SN) is again being transited by jolly Jupiter Rx indicating a period of happiness which Trump has recently avowed himself to be feeling (has an offer been made for his retirement?).

Yet Jupiter with South Node suggests this is also a period when ethics conflict with societal standards, endeavors may be blocked, and there are problems in relation to foreign lands. Loss (SN) of money (Jupiter) may also be in the picture along with Trump's diminishing popularity. More 'positively', broadcasting Jupiter in his role as politician will tend to repeat words he's mouthed in the past (SN) although, as you know, Mr. Trump repeats himself all the time--at his rallies and elsewhere. (It must be really annoying to be around grandpa telling the same story he told ten minutes before.)

Now one interesting planetary aspect between Trump and Don McGahn, a "real lawyer", is that their natal Saturns square one another (Aries/Cancer) which suggests conflicting values and disagreements (penned on the chart, upper), and in Astrology Saturn is legal planet of the law and government. There are other aspects between them, of course, but since my blogging time is brief today, I'll leave them for you to ferret out if you're curious!

Funny how Mercury-ruled Gemini is the sign of records and note-taking--Gemini McGahn takes them and Gemini Trump disparages them due to the record of his words and deeds they keep for future reference.