The Planetary Patterns of Summer 2019 with Jupiter Leading the Throng

In a previous post we considered the DC Horoscopes of Spring Equinox 2019 and Summer Solstice 2019 with both charts set for the White House and both having the same signs and degrees on their angles (14 Virgo rising, 12 Gemini at MC) which spotlights astrological Mercury--retrograde in Pisces and hangin' with deceptive Neptune in Spring but speeding through Cancer during the month of June.

As I type, we're in April and poised within the Spring season as we look ahead toward Summer so let's take another peek at the Summer Solstice 2019 chart with its Mutable Grand Cross, dynamic T-Squares, a focussed YOD, a Mystic Rectangle, and a Locomotive shape of planets chugging along behind Jupiter Rx.

Plus, Summer 2019 as a topic must include the karmic July 2, 2019 Solar Eclipse in Cancer and the July 2019 Lunar Eclipse (DC Horoscopes shown). So that's two disruptive Uranian 'wild cards' or 'cosmic blinks' in July, plus, America's 243rd birthday!

And mention should be made that in this chart Uranus @5Tau34 in the 8th house of Corporatism, Transformation, Debt/Credit, Insurance, Shared Resources, and the Occult is unaspected. Yes, Trump is a Jupiterian (natal Jupiter Stationary, materialistic and large) and a Martian (Mars rising with royal Regulus in royal Leo) but he's also very much a radical Uranian with his 10th house Uranus in Gemini behaving as his 'guiding planet' of chaos and disruption. When unaspected, the independent nature of planet Uranus is intensified along with its tendency to be unaffected by outside influences. Sparks of intuition may occur but won't inform the rest of the planets so that rigid, self-defeating, unconscious patterns of behavior are enforced rather than improved upon. And as you know, Uranus in money-oriented Taurus denotes a period when unusual sources of income are sought and speculation risks all in one roll of the dice. But with quirky Uranus in staid Taurus, premature action often leads to failure (Ebertin) making prudence and caution necessary.

Horoscope: Summer Solstice June 21, 2019 11:54:30 am edt White House Washington DC with my messy notes penned on as usual; please enlarge the image if you dare: 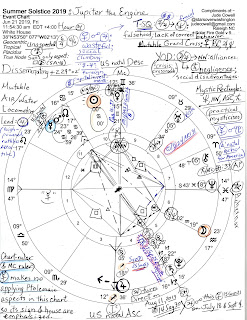 First, Jupiter Rx is the engine leading a Locomotive shape in the chart and this denotes high-powered executive/s ruthlessly determined upon success (Trump?). Yet with Jupiter retrograde, his plans may be delayed, interrupted, or somehow debilitated. Perhaps things will more easily progress once Jupiter resumes direct motion and trundles on his way forward after August 11, 2019. Note that astrological Jupiter may play many roles: politician, banker, corporatist, religious figure, judge, lawyer, military general, a wealthy person, a civil servant, an explorer/adventurer, and/or a fortune hunter.

A Mutable Grand Cross (Venus, Jupiter, Neptune, ASC) spotlights conditions of extreme restlessness and nervousness yet if the energies are well-handled can instead denote alertness and mental vigor. However, plans under its sway tend to be implemented inconsistently, indirectly, and by using impractical methods. Concentration is often lacking or is vacillating and indecisive. Needless to say, conditions are frustrating and, similar to the sign of Gemini, mental focus and actions tend to be spread too thinly in multiple directions to be as successful as they could be. Of course, the Grand Cross's oppositions describe a need to integrate logic and reasoning ability into circumstances and relationships in order to mitigate at least some of the instability and unreliability suggested here.

Add to this the muddled thinking and dreaminess when it comes to facing harsh realities embedded within a Jupiter-Neptune square, plus, a Venus-Neptune square's difficulty discerning the difference between reality and fantasy--with both squares and the people they represent affected by watery Neptune in its own sign of secretive Pisces--Neptune, planet of deception, lies, fraud, confusion, the media, the masses, and propaganda so it seems that we have a continuation of the Trumpish atmosphere of fantasy and deceit we've been mired in since Summer 2015.

Now naturally, any Grand Cross contains a few T-Squares, and the primary of which here is Venus-Jupiter = Neptune (conjunct the Descendant axis) so that foreign capital investments and/or foreign raids on the treasury are potentials. As a midpoint picture, possibilities include expansion, inflation, weakened limitations (such as laws?), and illusion and confusion delaying real progress. Also note that value-loving Venus is in duplicitous Gemini at the top of the chart for the entire world to see. Therefore, currency issues may also be indicated and be a goal (MC) and a topic of public discourse (Gemini). But Venus can also vengeful (especially when scorned) so retaliation may be on our Summer calendar as it always is for Donald Trump.

Then opposite Venus is banking planet Jupiter at IC and retrograde until August 11, 2019 (stations @14Sag30) so finances are in process of being reviewed, lessened, delayed, and/or retracted. Jupiter in 4th house suggests the involvement of Real Estate and/or Mining. Also in 4th house is Summer Solstice 2019's Prenatal Solar Eclipse ('PE') of January 5, 2019 @15Capricorn which imprinted upon the 116th Congress with its theme of 'joining new groups and gaining a great deal' ( Brady). Having two money planets opposing one another sounds a lot like a financial stand-off of some kind, doesn't it?

The YOD pointing toward the North Node (and Focused YOD pointing toward Saturn) show that a turning point or crossroad has been reached, a special task must completed, and/or a crisis awaits which must be dealt with. Plus, a combination of Saturn and South Node (of the Moon) is extremely limiting (cooperation needed!) and suggests some form of separation. However, at the base of the YOD the Moon-Jupiter sextile (60 degrees) suggests a ray of hope (A. Oken) yet we cannot ignore the fact that the Moon (the public) is apex of the socially concerned Saturn-Neptune midpoint which can indicate people with low character, pessimism, depression, and/or activities that serve no real purpose. And as a midpoint picture, Moon-Jupiter = Saturn also suggests limiting conditions; luck in brief spurts; lasting emotional misconceptions; negligence; inner conflicts; social disadvantages; and/or liver or gall bladder disease (Ebertin). Moon-Jupiter with NN merely hints at associations and new contacts that are 'on our path'.

As for the Mystic Rectangle (a pattern which always sounds rather groovy to me!) between Saturn, Neptune, NN, and ASC, its 'practical mysticism' vibe and karmic implications (Saturn, Nodal axis, and even slow-moving Neptune) can usually denote those who use mystical and/or astrological principles to guide their plans and actions so with Washington DC and our Founding Fathers well known for their mystical and astrological tendencies and interests via secret societies (ex: Freemasonry), I'll leave it for you to decide what and who in our present day may be hiding behind the scenes and manipulating outcomes during Summer 2019--or if the mystical pattern even applies to our circumstances at all!