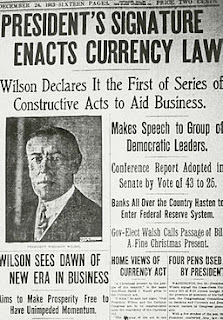 Those were the days! Or at least that's what I've heard--days when arch manipulators could squeak the Federal Reserve Act of 1913 through Congress as its members were antsy to scoot out the door for Christmas break and avoid being blamed--after New York bankers and other co-conspirators (such as J. P. Morgan) had taken a midnight train to Georgia in November 1910 incognito for a secret meeting meant to solve the effects of the Banking Panic of 1907 by forming a so-called "Federal Reserve" Bank of America which to this day is neither federal nor a reserve.

In order to keep their activities under wraps and thus unchallenged, NY reporters and the public were 'given the slip' at the train station, then fake names were used by the attendees once they reached Jekyll Island under the guise of 'duck hunters'. One imagines that if the name of one participant, German investment banker Paul Warburg, had gotten out it would have been extremely inconvenient.

Then there's the tiny fact that the 1907 'panic' was a manipulation by at least some of the very culprits who crept to Georgia that dark night determined to 'solve' the financial crisis they had helped create (so very Hegelian!) Even when the wealthy class loses, it wins, right?

Here are some details on the affair including The Aldrich Plan named after Senator Aldrich, a plan they and others heavily propagandized once back in New York in order to sway the American people toward favoring a new version of a central banking system. Eustace Mullins famously wrote all about it in his book, Secrets of the Federal Reserve (now on Kindle!). And yes, I've fussed about all this before on SO'W so why again?

Because the dreaded January 12, 2020 Great Conjunction of Saturn and Pluto @22Cap46 will perfect directly upon the Federal Reserve's Jupiter (Dec 23, 1913) which widely opposes its Neptune Rx @27Can31 (opposing US natal Pluto Rx: erosion of power) and, as you see in the bi-wheel below, Saturn-Pluto will conjunct disruptive Uranus in The Fed's New Moon chart of December 1, 1910 which occurred @8Sag49 during the secret meeting on Jekyll Island, Georgia--the Dark of the Moon when things go bump in the night and apparently entire value systems can be transformed: 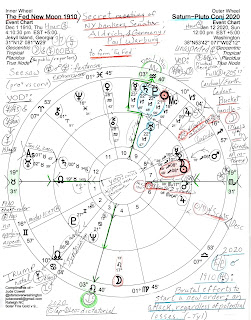 So as if the Saturn-Pluto Conjunction 2020 isn't enough by itself to fret over, if we factor in the Federal Reserve and our banking system (and Wall Street, as I suppose we must) via 1910 Uranus and 1913 Jupiter and Neptune, we find cosmic evidence of various potentials such as:

Loss and fear of loss, difficult decisions, social and religious fanaticism, sudden violence, erratic use of retaliatory measures (Trump's tariffs that miss the mark and tank the global economy? a purposeful sabotage?), sudden upsets in important plans, an attack in spite of potential losses, disguised uses of power, defects in planning, and brutal efforts to start a new order. The last would, of course, relate to the New Order of 1776 and the Bretton Woods Agreement being blown up as some feel they're in danger of being through Trump's erratic Uranian machinations and his inability to play nice with others. Plus, as noted in previous posts, the 2020 Saturn-Pluto Conjunction hits the natal Vertex of Donald Trump (22Cap51), a point of fated encounters and changing work conditions so we know that whatever happens in the coming months, the wide caboose of his nibs is smack dab in the middle of it. Come to think of it, his meddling caboose could use a hearty smack.

Yet is there a silver lining to this tale of loss and woe?

For in Astrology as in Life, there is always a positive side to every pessimistic view, troubling transit, or difficult event and here we can mention other more beneficial potentials within the 2020 Saturn-Pluto = 1910 Uranus = 1913 Jupiter/Neptune equation:

"Favorable outcomes in the use of large expenditures, resources, or energies", and/or, "people who have leadership and power to dispense" (Midpoints: Unleashing the Power of the Planets, Munkasey; other potentials from Ebertin and Tyl).

Could such leading people turn out to be political candidates who will be victorious on November 3, 2020, assume power, and take on the Herculean task of cleaning up the massive messes that Trump has made? For after all, a dreary economic picture won't aid Trump to win re-election in 2020 so it will take a bunch of cheating and election fraud to accomplish that.

Two Previous Yet Related Posts: A New Atlantis, Williamsburg, and Our Secret Destiny and Saturn-Pluto, Economic Recessions, and Eclipses.

Damn. Thanks for the history lesson. Its the right time for women to have access to top leadership positions, they will bring balance and end the treacherous behavior of the patriarch.

Have you listened to Mark Jones podcast on the conjunction? He goes in depth on Pluto & Saturn north & south nodes. They are bingo--21-22 Cancer/Capricorn. Thinking about the Federal Reserve that makes all the sense in the world. I wonder what it will look like after saturn/pluto/jupiter conjunction. It is going to be bumpy. I have been thinking a lot lately how Jupiter can help death. Maybe no federal reserve at the end? Honestly anything is possible. .

Tracy thanks for heads-up on the Mark Jones podcast sounds interesting and will have to locate it! jc