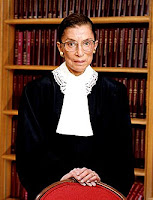 Collection of the Supreme Court of the United States; by Steve Petteway [Public domain]

November 5, 2019: Since the natal horoscope and data of Supreme Court Justice Ruth Bader-Ginsburg, pictured above, are rated X (date with no accurate time), and because she likely will be the Justice who will decide on an upcoming case involving scofflaw Donald Trump (poetic justice!), I'm typing a few notes concerning Justice Ginsburg's personality blend using her double Water Pisces-Scorpio Sun-Moon combo of conscious + unconscious energies.

Born Ruth Joan Bader on March 15, 1933 in Brooklyn, King's County, New York, her Sun-Moon blend reveals her as an individual with tenacity, courage, acute perception, and a deep intellectual capacity. Emotional and intuitive, the personality of Justice Ginsburg is passionate, dedicated, and possesses deep psychological insight into other people's motives. She exhibits strength in adversity and stubbornness once a decision has been made. Unafraid of the truth, the Justice may not be easy to live with, yet has an innate desire to help and heal others who are in despair, an admirable quality in my estimation.

Her complex Sun Pisces-Moon Scorpio blend is shared by the natal charts of some interesting folk including: Johnny Cash, George Harrison, Bernadette Peters, explorer David Livingstone, Prince Andrew, Duke of York, poet Henry Wadsworth Longfellow, and author John Steinbeck who informs us that, "It is the nature of man as he grows older...to protest against change, particularly change for the better."

And according to Longfellow,

"Know how sublime a thing it is to suffer and be strong."

Well, I'm not certain how the Steinbeck quote applies to her but perhaps you'll agree with me that tenacious, notorious Justice Ruth Bader Ginsburg, cancer survivor, definitely has that last concept well covered!

In closing, here are several inspiring Quotes by Ruth Bader Ginsburg and I'd like to cherry-pick three of my favorites off the list for your consideration:

"A gender line...helps to keep women not on a pedestal, but in a cage."

"A constitution, as important as it is, will mean nothing unless the people are yearning for liberty and freedom."

"I would like to be remembered as someone who used whatever talent she had to do her work to the very best of her ability."