Below is a dual chart image of the dedication horoscope of the Department of Justice ('DOJ') October 25, 1934 (in Freemasonic ceremony presided over by FDR beginning at 3:00 pm est; lower left) and DOJ's Secondary Progressed ('SP') Full Moon @28Can39 (culmination of a cycle) which perfects on August 20, 2020 at 2:36:31 pm edt with both charts set for Washington DC, so often the villain of the piece. As you see, DOJ's SP Full Moon conjoins SP Pluto, and opposite, DOJ's SP Sun conjuncts America's natal Pluto Rx so that our natal Mercury-Pluto opposition and the karmic progressed DOJ Nodal axis are involved across a blend of the ambitious Cancer-Capricorn axis and the self-willed Leo-Aquarius polarity.

At SP Midheaven ('MC') sits the SP midpoint of Uranus-North-Node of radical, reactionary politics of anarchy and zealotry which suggests sudden, disruptive reforms while opposing SP Neptune: a partner retires and/or deception (Ebertin). And Neptune conjunct IC? Foundation undermining is underway. To me the complex Uranus-NN-MC-Neptune-IC picture in part describes recent resignations of DOJ lawyers in order to avoid working any longer under a Trump-bossed DOJ which was set up to be independent of the Executive Branch of government but is now overseen by Trump's personal "Attorney General" Bill Barr, who now 'hears' calls for him to step down or be impeached: 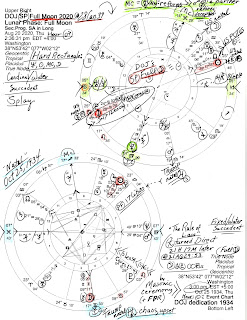 Here are potentials for the SP Full Moon's more prominent midpoint pictures which seem to me to relate to current events and Trump's erosion of the rule of law:

Sun-Pluto = Uranus: carrying out fanatic reforms; Pluto-NN = Uranus: big upsets within the community; as noted, Uranus-NN = MC: desire to bring plans to fruition with others; Uranus-Neptune = ASC: instability; people who are easily influenced; Jupiter-Neptune = Mars: unreliability; being let down by others; speculation; plans without prospect; Mercury-MC = Saturn: abandonment of previous aims (Ebertin).

Now there are a lot more details that could be said about DOJ's SP Full Moon horoscope in relation to current events but frankly I'm too wumped out to type it for you this evening so perhaps an energetic reader will provide her or his insights by adding an on-topic comment under this post!

I don't know about you, but I'm tired of Neptune's slippery lying cheating heart. He is like a bad boyfriend trying to cover up yet ANOTHER girlfriend. I'm also sympathetic but just want to shake those poor sots who search the bottom of their beer mugs for a bit of truth telling from said Neptunian cheating boyfriend. Now, Saturn and Pluto, while known to be a structure busting pair, usually have their ways of culling out the rotten and getting down to what is intensely real and useful. I'm hoping we can make the Rule of Law (cue Capricorn strutting) sexy again. Also, the dumb, ham handed authoritarianism and fear tactics DT pedals, supported by slippery Barr, are getting rather tiresome. Down with the mob boss, and may the real truth tellers at DOJ stand up and be seen as the heroes they are.

I see massive DOJ revolt, and US Intel crowd-joining their energies to work overt/covertly to do a Brutus move on Barr. They know Barr’s CIA past and unitary power pushing throughout his long anti-democratic law career. This is a bare knuckles fight.

Kat, yes! and the whole bunch of the culprits are in extremely risky
positions--by choice, one must assume. jc