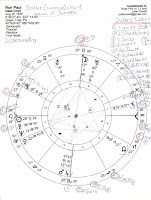 Using the Solar (sunrise) chart we may find much information on Libertarian Ron Paul even without a known birth time. And since the Moon was in Taurus through the 24 hours of Aug 20, 1935, we may use Sun Leo/Moon Taurus for his personality blend--a good place to start.

One of the greatest strengths of Sun Leo/Moon Taurus is having an emotional and moral commitment to goals and ideals. There is staying power with this combo and a capacity for hard work, plus an ability to think big. (His Jupiter/Neptune sextile supports his 'thinking big' ability, but adds sensitivity to criticism and a need for recognition.)

There is generosity, egocentricity, stubbornness, and a love of grandeur...but also great administrative talent which is admirably echoed by Mars trine Saturn.

He is an essentially positive and dependable person, and unflappable in a crisis--excellent traits for doctor or politician.

Greatest weaknesses would be an intense, biased subjectivity, and a tendency to be overly proud, inflexible, and selfish when offended. He may at times speak out scathingly when diplomacy would have been the better course. (Sun Sign, Moon Sign, Charles and Suzy Harvey.)

Paul's Sun-Moon phase is Disseminating--he's a great teacher who loves to share what he's learned, and he communicates well. This is the crusader for a cause who may drift toward fanaticism.

In the Solar chart shown, Moon has not yet squared the Sun, but she will before Aug 20 ends and if so, we have a Sun/Moon square here.

Sun square Moon is the will blocked by the desires resulting in defensiveness and emotional insecurity. Yet much may be accomplished if the ego can be set aside...maturity aids in this.

A square between the luminaries tends toward a fighting spirit for there's a misalignment between what's wanted and what one is willing to do to get it. A lack of compromising ability may be in evidence yet I'm not convinced this is the case with Ron Paul whose moral integrity is mentioned above with Moon in stubborn Taurus and Sun in approval-seeking, royally-entitled Leo.

And if Moon is opposite Mars, the personality is outgoing but may be quite aggressive with a tendency for the tongue to speak out before the brain is engaged. Criticism is deeply resented with Moon opposite Mars...touchy feelings!

So is Paul a stubborn cuss? Probably so. He is a politician seeking recognition, after all, and staying power is the upside of stubborness.

If his Sun and Moon are squared, he may be constantly at odds with important people--now that sounds about right considering his voting record!

"Dr. No" has voted against anything that he believes violates the US Constitution (so I'm guessin' he didn't vote for George Bush!)

Paul has never voted to raise taxes or congressional pay, and refuses to participate in Congress' cushy pension plan. He would like the federal government out of education (agreed--just look at how that's turned out), and he doesn't take "junkets" on the taxpayers' dime. He also thinks that Roe v Wade should be overturned. Being a doctor, Paul obviously has informed views on this subject from a medical standpoint.

Very impressive, although I'm not sure about overturning Roe v. Wade--my deepest feelings have always been that Congress doesn't belong in a doctor's examination room--and that abortion used as birth control is the real problem. But enough about me--let's see what else we can see about Ron Paul...

This interesting aspect gives a will that is out of step with prevailing social trends (his voting record and Libertarianism), and may indicate that he initiates things at the wrong time and place which causes resentment and misunderstanding from others. Yet it also gives great resourcefulness and self-reliance along with the capacity to weather many hardships when necessary.

The doctor has Chiron in Gemini:

As a doctor with Chiron, the Healer, in Gemini, this placement gives him an ability to feel where the electrical energy is flowing in the body, and makes him highly attuned to mass consciousness. The keyword for Chiron in Gemini is: awareness.

Paul has much nervous energy and must take regular rest breaks if he is not to burn out, hard worker though he is. Chiron in Gemini intrinsically understands that how we think creates the reality in which we live--and that this can be changed. (Chiron, B. H. Clow.) Born during Nazism and atomic experimentation, Paul has an imperative to communicate many truths concerning his parents' generation.

Recently, transiting Mars opposed Paul's n Mars (the head-against-a-brick-wall transit) and also opposed his n Jupiter--when we tend to let others make inflated assumptions about us.

Grandstanding and bravura (which Leo loves anyway!) may have been the order of the day, but with a natal Mars/Jupiter conj, he is fearless in the face of danger, and enjoys direct confrontations. Paul never doubts he will succeed--we saw this aspect in action when he was interviewed recently by George Stephanopolous who basically told him he couldn't win the nomination. Paul was not impressed by the diss--and yet there may have been a flicker of hurt feelings.)

Mars conj Jupiter gives physical stamina which helps with all that nervous energy tiring him out (mentioned above.) This aspect is shared natally by some famous people. Exs: Hugh Hefner (Mr. Stamina?), Yoko Ono, John F. Kennedy (who kept going even with major back pain), Ray Charles, and Wayne Newton.

You may notice that transit Saturn will conj natal Sun during the first half of August which can bring an increase in responsibilities and authority as one's maturity and wisdom are being tested. Yet there may be resentment toward those who restrict or deny one's progress--or more recognition for longterm efforts.

Bush has been having this transit for while now (due to Saturn's retrogradation) and this may have affected his health (ex: last Saturday's colonoscopy)--so Paul may have to slow down himself or his vitality (Sun) may suffer.

To close, here are the Sun/Moon personality blend 'word pictures' aka Images for Integration:

The dull clay that America has become in recent years could use some turning, and if we want real change (while still upholding our Constitution) Ron Paul may be just the ticket...if he can get on the ticket.
Posted by Jude Cowell at 12:34 PM

Hi Jude :-)
I met Congressman Paul & his wife this past August and asked for time of birth. It is unknown.
I rectified the Congressman's nativity and have found that 7:45 AM works very well. Have a look at his transits for yesterday 11/05/2007. The November 5th Money Bomb is quite apparent and seems to confirm the time of birth.

I believe Ron Paul will be the 44th President of the United States. Have a look at election day - November 4, 2008.

Thanks, Granny Miller, I'll be looking at the rectified chart asap! jude

Hi Jude,
Really enjoyed your comments. Especially "fearless in the face of danger" and "enjoys direct confrontation" for that beautiful strong Scorpio Mars conjunct Jupiter. The closest aspect is Mercury, very clear and direct in Virgo, opposition Saturn in Pisces. Both are at 7 degrees, and transiting Saturn was at 7 in November and now again is at 7 degrees, this time retrograde.
Someone suggested to me 6pm birthtime, which produces Capriorn rising, giving added power to Saturn, and his silver hair brought him such strength! Also, this produces Scorpio MC with that powerful Mars Jupiter in the 10th.
See what you think at Ron Paul: Capricorn Rising? youtube.com/PismoPam