Horoscope of the 'Roaring 20s' Solar Eclipse: why it $till matters 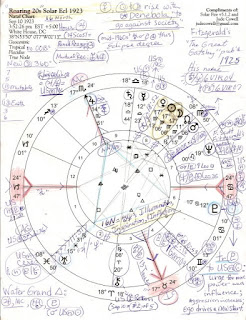 Chart-ruler Saturn makes a few applying aspects in the chart:

1. sextile Neptune (0A15; an opportunity for putting inspired Neptunian creativity into Saturnian form);

This Solar Eclipse's Pluto 12Can10 is in process of being opposed by transiting Pluto now in 2010 and beyond as modern-day Pluto readies to oppose US natal Sun in Cancer. Apparently Mr. Hades was 'with' our leadership in the 1920s but is now opposing it and our financial health (natal Jupiter 5Can56 will be precisely opposed by tr Pluto three times: Jan 17, 2011, Nov 16, 2011, and Jan 2, 2012. And that's not counting Pluto opposite n Sun! Yes, you're right, these are extremely perilous years for our nation.

So today, Republicans have been yelling out for the Obama administration's current budget which seems to be hiding in the shadows. No wonder, with all of Capitol Hill's years of fraud, corruption, and New World Order machinations which have tied us together and caused a near- or soon- collapse of the US and world economies. As if the GOP didn't know the NWO score! They just want to be on top when the fluff hits the fan rather than taking orders from the Dems. That is, if the R v D two-party illusion is retained as a way to divide and conquer we-the-people. The political tactic may not be necessary much longer.

But look at the Horoscope of the Roaring Twenties' Solar Eclipse of September 10, 1923 with musical, confused Neptune dancing a sexy Charleston in showy, dramatic, entertaining Leo! Flappers showing their stuff! Here's one now: 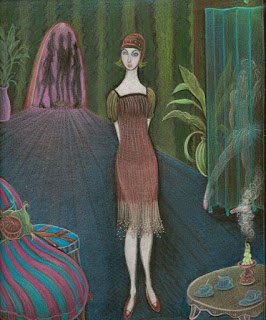 So I have sub-titled the 'Roaring 20s Eclipse' as the Illumination-Inspiration-Inflation Solar Eclipse because it is highly influenced by vibes from the Uranus/Neptune pair of energies which were active in its Initial Eclipse in the Series (16 North) which began manifesting on Feb 15, 1599 (OS) @ 6Pis02 with Uranus 24Ari24 trine Neptune 24Leo05 Rx, a creative Fire trine between Inspiration and Illumination.

This awake-asleep pair of outer, transpersonal planets has to do with inner vision, ESP, spirituality, and/or mysticism, and together are capable of eliminating the waking consciousness (I've seen murder charts with Uran/Nep active or angular, including their midpoint. Have you?)

Brady's Predictive Astrology says 16N contains the flavor of inspiration and the illumination of ideas from Uranus/Neptune which indicates a 'sudden release of material from the unconscious' (and from the Collective Unconscious as in writing, painting, etc); a great deal of insight is available to those who know how to tap it, whenever 16N holds sway.

(Creativity of 1923 includes: Kahlil Gibran's The Prophet, Picasso's The Pipes of Pan, Joan Miro's The Tilled Field, and the dance, The Charleston, was introduced in NYC...hidden away 'speak-easies' abounded and were awash with 'bathtub gin' - eeeuuww!)

Michael Munkasey (who doesn't like to be precisely quoted but sometimes it's necessary), in his Midpoints book, gives the 'futuristic' and 'enlightening' combo of Uranus/Neptune in Politics and Business as (and any bold or italics are mine):

changes in social or political structures due to new ideas or dreams of the future; strikes or revolutions focused on new ways of thinking; groups formed to exploit oil or chemical resources: sudden upsurges in availability of illegal drugs, including alcohol; subversion that uses new methods of gathering information; movements that diminish the power or authority of a nation's leadership or police systems.

Fast forward to Sept 10, 1923, and the Roaring 20s Eclipse is, as you see, graced by a Water Grand Trine between Jupiter in in mid-Scorpio, Uranus in mid-Pisces, and Pluto 12Can10 - tr Pluto conjunct US natal Sun (and SIRIUS in 1776) - the inflation of emotions and financials carried the decade...until the Crash of October 1929.

The protective quality of the trine (120 degrees) is emphasized by Water along with the tendency toward passivity and a search for anything soothing and nurturing (alcohol and other drugs are the negative manifestation of this search; merging with the Divine Source is its positive.)

Yes, escapism is a potential with a Water Grand Trine which certainly sums up the 1920s decade of parties, drinking, lovely creativity, and new directions in political and social movements as the era's shorter skirts for women vexed our puritanical attitudes. Unconscious forces may take over such light weights who skim the surface of life and wish to avoid the harsher realities...Demon Alcohol held sway with the Charleston crowd!

Perhaps if harsher realities had been faced earlier in the decade, the dire effects of the Market Crash of Oct 1929 might have been softened or alleviated. Of course, we may say the same of the current decade's excesses leading up to the Financial Collapse of 2008...but this time, the NWO types have tied nations into an interlaced financial knot or network ("too big to fail"), and debt-by-credit and credit cards have done their extensive damage.

Jup/Pluto = Uranus: a quick exploitation of every situation; sudden reforms or developments; fanatical striving for improvements.

In the creative and social realms, we may say that F. Scott Fitzgerald's novel The Great Gatsby (1925) speaks brilliantly for the jittery age of prohibition, gin, and loose romantic alliances, and his natal Uranus/Neptune midpoint 6Vir04 (conjunct his Pre-Natal Ecl 6Vir07) is here triggered by transiting Mars in Sept 1923, so we can say that for Fitzgerald:

Uranus/Neptune = Mars: increased tolerance for unusual activities which become sources of ideas and inspiration; upsets cause quick exits; applied creativity can be very strong (it was when he bestirred himself - jc); impatience; a nervous sense of foreboding; lack of stamina; instability; misdirected energy or paralysis.

And we may wish 'for fun' to consider President Obama's natal Pluto 6Vir59...

Uranus/Neptune = BHO's n Pluto: remaining at the mercy of external circumstances and conditions without trying to make a firm stand; abandoning resistance; the necessity to give in; great losses, calamities, disasters; the Big Picture demands a certain course of action which must be followed, very little option to do otherwise.

(All midpoints pictures from: Ebertin, Tyl, and Munkasey; as always, any, all, or none of their potentials may apply.)

Riots and strikes follow the collapse of the German currency and Germany fails to meet its war reparation payments; Hitler attempts a coup in Munich; in Bulgaria a coup ensues and the prime minister is assassinated; Spain becomes a dictatorship; an earthquake wipes out most of Tokyo killing half a million people - 9 days prior to the Eclipse you see pictured here, so the quake is within its influence, the same Eclipse Series as in 1941 and the bombing of Pearl Harbor); US President Warren G. Harding dies suddenly; US coal miners strike; in San Francisco, CA the first supermarket opens for business.

Well, if you hadn't seen it, I thought you might wish to view the horoscope of the 1920s roaring through the lens of a Solar Eclipse which links, bwo Uranus and Neptune, to the NWO chart of 1993, the 2008 Financial Collapse, and on into 16N's next manifestation of Nov 3, 2013 which will take the unsettling yet illuminating Uranus-Neptune vibes well into 2014.

Much of the info on 1923 comes from Marjorie Orr's excellent book, The Astrological History of the World; you may notice that the Wiki page for 1923 has an odd entry for Sept 3, 1923...I don't think Elton John was performing anywhere in 1923 but probably was on 'Sept 3' of a more recent year!

And on the subject of decades of greed, you may wish to read or review a post on Ronald Reagan's natal Jupiter which appears above in the Sept 20, 1923 Solar Eclipse chart @ '15Scorpio'...the 1923 Eclipse is basically a Jupiter Return for Mr. Reagan; a link to my post concerning the 'Reaganomics Eclipse' is included.
Posted by Jude Cowell at 11:56 AM