Now that the July 11, 2010 Solar Eclipse is almost upon us, I've had a chance to check a certain book which has what I consider to be quaint symbols, The 360 Degrees of the Zodiac by Adriano Carelli.

Not every degree has a word picture but all have explanations based on empirical study; the symbols are from start to end of the 360 degr circle, and not keyed to one another as in books on Sabian Symbols such as that by Dane Rudhyar and Marc Edmund Jones. Some people have critiqued Carelli's book for that reason - one symbol doesn't 'lead into' another and the meanings of opposite symbols may have little or nothing to do with another.

Yet I find Carelli's Symbols useful in most cases, quite odd in others, and think that perhaps the July 11 Solar Eclipse @ 19Can24 may be elucidated on some level by considering Carelli'a symbols for '19Can' and '20Can' since the book recommends rounding down to the actual degree sans minute. This suits me since each degree is part of a process, as is life, and one degree 'finishes' as the next comes into being. Ex: a planet's position @ 15Can29 is no less '15' than '16' but is in process of evolving.

Now I won't quote the book in full but will give 'highlights' of both degrees' explanations which may apply in 2010 as best they may, or perhaps you'll discover that they describe certain persons of your acquaintance - or people in the news.

Plus, the July 11 Solar Eclipse carries some hint of crisis because '20Cancer' is a critical, sensitive degree and conjoins Fixed Star,Castor, whose potentials include: writing or creating; sudden fame or loss; crippling of limbs; mental illness; murder (A. Louis, Horary Plain and Simple.)

Click the link above and you'll see that the Eclipse occurs in the 8th house of Shared Resources, Credit, Insurance, Debt, and Transformaton when the chart is set for DC (and it is. This is Stars Over Washington. ;p)

In his book, Mr. Carelli uses classical literature and other chivalrous references which may give a quaintness to the information. Yet he is describing, of course, archetypal images from the Collective Unconscious; 'knights' still exist in 2010 but whether they retain their integrity as they should is quite another question.

Both degrees for the July 11 Solar Eclipse do happen to have word pictures which are the symbols themselves, and I shall quote whomever Carelli quotes in italics while attempting to streamline the rest.

(Note: You may notice that the 1st symbol has an Illuminati flavor; the 2nd symbol reminds me of Sirius in its 'Dog Star' role.)

'19Can' SYMBOL: A renaissance gentlemen, sword and dagger at his side, plays the flute before a book stand on which an ancient illuminated score rests. Other courtiers stand respectfully around.

Though wearing a sword, I am of courteous manners. - Heraldic device to be read on the sword-bearing coat of arms of painter Courtois Bourguignon, still standing on the house where he lived in Rome.

Gallantry in war, civil courage, a great passion and gift for art, a taste for polemics. (...) capable of profound thought, will love books and research and will hold, for all his refinement, a marked sway over others. His is a terribly difficult character. He will be apt to fly off the handle for a trifle; he will be very kind when not aroused, but will frighten everyone when angered.

...a dramatic actor, an opera singer, an orchestra player or conductor.

The parents might be of illustrious descent, even if they do not display their title officially. (Ex: Michaelangelo Buonarroti, degree of Saturn, ruler of his Ascendant.)


'20Can' SYMBOL: A watchdog slumbering at the entrance of an old palace.

Masters is what dogs have. - popular Italian proverb.

The native will never be in want of either a piece of bread or of a roof. Though poor, he has, all considered, an easy life of it. His days are spent in blissful idleness. An easy life, not a dignified one. He cannot even think of being independent; as soon as the old master has gone, he will look for a new one. When kicked, he will whine like a coward and will think nothing of kissing the hands that enslave him.

...nothing weighs so heavily on his shoulders as a personal responsibility or thinking with his own head. Should the master allow him a minimum of authority over others, he will misuse it or at least make a display of it in front of those less well-dressed.

...hale and hearty, though no great friend of water and soap.

....his poverty is at times the result of a heritage too costly for his income, which it would be wise to waive, though none would dare advise him to do so. A bastard (or a degenerate) scion of a very old lineage, he would die rather than forget it.

As long as mankind stays what it is, policemen, customs officers, sextons, career soldiers, jail wardens, harlots, are all necessary evils. The frontier needs watchdogs, justice needs bloodhounds, and the male needs the female.

For further reading, may I recommend to you a post from March 2009 concerning a horoscope that's good for 100 years? Midpoint pictures of the New Millennium Chart 2001 includes its Pre-Natal Eclipse Series (PE of the 21st century), the 2 South, which manifested on December 25, 2000 @ 4Cap15. This Solar Eclipse time-links by degree and sign to the recent Lunar Eclipse 4Cap46 conjunct Pluto on June 26, 2010.

So from 2000 to 2010, conscious and unconscious material synthesizes as events repeat in similar ways on various levels so they may be dealt with, and I believe this relates to the soon-perfecting opposition between societal planets, Jupiter (expansion) and Saturn (restriction.)

Their opposition is the 10-years-later culmination phase ('Full Moon') of their Great Conjunction of May 28, 2000 @ '23Taurus' = "A Jewelry Shop Filled With the Most Magnificent Gems" - when the seeds of our current malaise were planted, and which describes to me the wealth that's now been sucked out of the global economy and into Pluto's dark and selfish lair for Taurus is a practical Earth sign whose shadow side contains greed, possessiveness, intolerance, and prejudice.

Besides relating to the Republican Party (Jup) and Democratic Party (Sat) in US Political Astrology, the orbital dance of Jupiter and Saturn relates to stock markets as well, and it's been 10 years since the clock began ticking on world banking plans of political import - the first half of their cycle has been the up side; now we have 10 years of the down side until their next Great Conjunction of Dec 21, 2020 in Air @ 00AQ29, the current position of US Inaugural Sun (the leader.)

Also in the post, you'll find Rose Lineman's advice on how to achieve karmic progress for eclipses occurring in Capricorn (June 26), ruled by taskmaster, Saturn. And I know this reminds you of the over-spending habits of the populace (Moon) of various nations and their should-have-known-better, ill-coping governments (Pluto in Cap), the bad habits which have brought mankind to the edge of a dizzying financial precipice, 2008 and beyond. 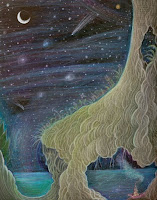 Pluto Draws Near, by yours truly. Mr. Underworld is repped by the little red sphere, upper right. He's small but he's primal.
Posted by Jude Cowell at 10:26 PM

Linda Hill said that even she finds rounding down the numbers for the Sabian Symbols works for her. She mentions it in her interview with Dena De Castro on the Evolutionary podcast series.

The 19 Cancer eclipse will fall in my 11th and exactly square my 19 Aries Sun in the 8th.

"Masters is what dogs have"- I'd never heard that before- I like it!