With its 125th anniversary just passed, the Haymarket Riot (aka, the Haymarket Massacre) of May 4, 1886 in Haymarket Square, Chicago, Illinois shows an interesting natal horoscope which heralds today's business/government v workers/labor unions stand-offs in Wisconsin and elsewhere.

Beginning as a general strike on May 1 (the 110th anniversary date of Adam Weishaupt's formation of the Bavarian Society of the Illuminati on May 1, 1776), events escalated into the Chicago rally which exploded into violence when a pipe bomb was thrown at the police as they dispersed the crowd after the last orator spoke (around 10:30 pm.) The bomb was thrown by an "unknown person" as the above linked Wiki profile states, and controversy remains as to the proceedings and capabilities.

A prime theory is that this "unknown person" was an instigator not of the working class attending the rally, but was a government, special interest, and/or rival group's operative (8th house Mars in Virgo) tasked to turn the peaceful rally into a win for the business community which was not enthused by the rally's purpose: to educate the people on the merits of instituting an 8-hour work day in the US.

Of the anarchists arrested, one was a Knight of the Knights of Labor, a rival organization of the group staging the rally, the American Federation of Labor (AFL) - although the Knights of Labor allegedly were for the 8-hour work day as well. Perhaps rivalry for members was part of a subversion tactic (the bomb) with the Knights' membership peaking in 1886 but plunging after the Haymarket Riot and subsequent trials, convictions, and executions.

Considering the Knights' Roman Catholic trappings, it's illuminating that the Sabian Symbol of the 29th crisis degree rising at 10:30 pm that night, '30Sag' = "The Pope Blessing the Faithful." For doing what, I wonder? This indicates Jupiter 26Vir32 Rx in 9th H as chart-ruler; ten seconds later, 00Cap00 arose nominating Saturn 4Can49 in 7th H of Partnerships as chart-ruler. Saturn is, of course, amidst US natal planets, Venus and Jupiter, with US n Sun nearby; outside the horoscope, I've penned in America's natal planets (highlighted in lavender.)

Jupiter's position shows that a recent transit by conjunction has occurred to US natal Neptune 22Vir25, a time of inspired ideas, actions, and enhanced imagination, yet it can ramp up fanaticism and paranoia; promotions of a cause, scandals, and bankruptcies may also be on the speculative Jupiter/Neptune menu. And this is happening near US natal Mc (00Lib53) with its outlet for the energy falling in the Career-Public Status department of the US chart.

Here are Saturn to US n Venus and US n Jupiter transits in progress. Saturn to n Venus sobers up the environment and shows how self-serving social gestures can be; creating more structure within relationships is the best way to use this energy toward greater stability and commitment (such as joining a union?)

Saturn to US n Jupiter is a time when economic growth is restricted and attitudes become more serious; for those who've gained wealth, it's time to be more philanthropic - to give back some of what has been given. (It's that time again in 2011 but over the years our legal system has successfully been eroded so that major financial titans and fraudsters are protected from facing their crimes rather than tried and convicted, and tax laws favor the rich; the current stand-offs with labor unions represent the rich class dunning the lower incomers with "austerity" measures while the wealthy themselves receive more tax breaks which only widens the income inequality gap even further. Yes, the fox has always guarded the US henhouse, but now he's foreclosed and put the chickens on the curb.

The US President at the time of the Haymarket Riot was Grover Cleveland, the only American president to serve two non-consecutive terms in the White House (March 4, 1885 and March 4, 1893, with Benjamin Harrison in between - inaugurated March 4, 1889.)

You'll note the Robber Baron duo of Neptune and Pluto snugged around the Moon (the people) and the midpoint of the plutocratic, primally violent, corporatist, and disenfranchising Pluto/Chiron pair conjoined with US natal Uranus 8Gem55 in the 6th H of Work, Service, and Health. Neptune and the Moon stimulate two difficult Fixed Stars, Algol and Capulus, stars of rage and violence.

Sun 14Tau35 actually conjoins the degree which now rises (ASC) at noon for US presidential inaugurations every four years though it didn't in 1886 since the ASC change for the Oath of Office (and thus, for whoever is about to act as president) occurred between FDR's 1933 and 1937 inaugurations - from early March to January 20 or 21st, if the 20th falls on a Sunday.

Please click to enlarge the horoscope and to read a few more notes on the conditions at the time of the bomb toss which triggered the Haymarket Riot. Your on-topic comments and opinions are always welcome. 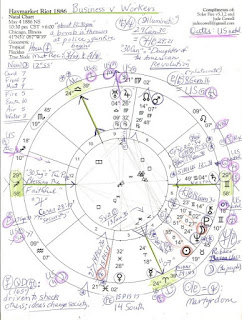 Phase: New Moon 12:55 with Sygyzy Moon occurring the day before; Jupiter as chart-ruler applies to an Earthy trine with Neptune (1A41) indicating an ability to see restored order where others fear utter chaos, and social programs underway for developing productive potentials for the poor and working class.

With Saturn as chart-ruler, the separating (waning) square with rebel Uranus (0S41) shows a time of problems with authority figures and a need to break from the past in order to progress. The Saturn/Uranus cycle lasts approximately 45 years and we have been in the cycle's opposition stage lately though now the pair of brittleness are in a quindecile (165 degrees of obsession-compulsion) aspect indicating a drive to disrupt governing systems, break outdated concepts, and defy law and order. (Reeves.)

In 1886, the midpoint of Mars/Uranus, a riotous and explosive combination of energies, is 'masked' by US natal Neptune 22Vir25, in the sign of The Worker.

Tr Mars/Uranus = n Neptune: cunning and deceit; a low and mean way of acting; a desire to harm others; a person with bad intentions; rage and frenzy.

The 'rage and frenzy' came only after the bomb was lobbed at police for the rally was peaceful until then - typical of a set up with a planted instigator in the crowd acting to cause disrepute to the rally's cause.

Even Wisconsin's Gov. Scott Walker, during his bogus 'talk' with financial patron "David Koch" on the phone, admitted to the fake Koch that he had considered the time-worn political tactic of planting "troublemakers" in the crowd (in order disrupt proceedings and undermine the opposition.)

From 1886 to 2011, these political radicals and outlaws are so very very tiresome, aren't they?

Now let's close with the two Images for Integration for the double Earth Sun Taurus-Moon Taurus blend which is shared natally by none other than Karl Marx:

And how about a famous quote from Marx since 'socialism' is such a commonly leveled charge these days and has been historically so whenever the rich fear losing a dime or two to the needy...