This weekend I'm in the midst of serious typing of my Oct-Nov-Dec 2012 issue #2 of Stars Over Washington Monthly so I'm squishing this post between the final night of RNC 2012 on Thursday, and the start of DNC 2012 early next week. Whew!

Yet as I study the horoscopes of the presidential debates and the one VP debate (their schedule/locations listed below, unless changed) it seems I couldn't put off any longer posting Mitt Romney's Secondary Progressions for the day of the first presidential debate of October 3rd (9:00 pm debate charts are used which doesn't matter much for Progressions--unless for some timely reason it does.) As you know, the symbolic movement of the SP Moon is based on the actual movement of earth's Moon which amounts to approximately one degree per month in astrological progressions. There are many interesting chart factors but I must only mention a few this evening (a new SNL tonight, I think!)

Issuing from Mitt Romney's natal chart, we see that his SP Moon (Moon = 'reiging need'--Tyl) has reached his progressed Midheaven (MC = Aspirations; The Goal; Public Status) and his 5-6 year Quest to be president of the land is very much in sight (MC.)

Now the American people don't need Astrology to inform them of Mr. Romney's longed-for vision (SP Moon opposite SP Neptune--and the sailing Moon occulted mystical Neptune for his nom acceptance speech) yet I thought you might wish to view Romney's SP chart showing Moon-to-MC 'in black and white' in case you hadn't seen it before. The synchronicity is quite striking given the circumstances and I believe that having his SP Neptune 8Lib19 Rx at IC, the Foundation of the Matter, represents on one level his vision of being CEO-in-Chief and on another level the Mormon Church and its hierarchy of 'gods on Earth' (puh!) who apparently intend to place Mitt at America's helm, in the White House.

As always, feel free to disagree, and No, I don't like thinking of four years of a Plutocrat-in-Chief even though I feel that international banking houses have ruled the US government at least since the early 1900s and act through a political arm (Washington agents) and through the US Central Bank, aka, the Federal 'Reserve' System (which at best, is quasi-federal, if that.)

Now perhaps it isn't fair not to post President Obama's SP chart for October 3rd as well but there's little time to spare. However, I can say that with his SP MC @18Cap24 (Honolulu, Hawaii) has SP Saturn 23Cap14 Rx and SP Jupiter 27Cap19 (turned Direct by Progression from its natal sign of AQ and conjunct US natal Pluto Rx) so there are good portents on a societal level (Jup-Sat = societal planets and on a pragmatic get-it-done level, too. Jipter to Pluto shows links to large financiers and funders though 'they say' not as many as Mittens has squirreled away. (Large tax breaks are expected, you know.)

Well, Mr. President's SP Moon on Oct 3rd is @14Ari39 (in SP 12th house of Politics) and he is now on the waning side of a SP Full Moon (perfected @1Ari10 on Nov 6, 2011 near the AP) while Mr. Romney enters his SP Balsamic phase of the Moon on Sept 22, 2012, beginning a period when endings, partings, and separations are prominent and one may take over tasks and responsibilities for someone who, for some reason, cannot carry on. And you may as well know that it pains and annoys me very much to type this presidential possibility. 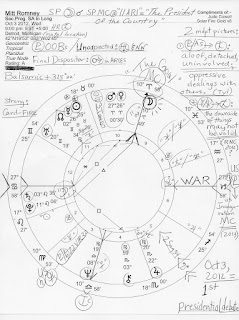 Chart shown: Oct 3, 2012 Secondary Progressions for Mitt Romney, born March 12, 1947 9:51 am EST Detroit, Michigan; natal ASC 1Gem01...'2Gem' = "Santa Claus Filling Stockings Furtively" which sounds like Mittens to me! And much like the grasping, furtive GOP as an entity and a win-at-any cost force for selfishness.

Sabian Symbols from SolarFire Gold v8 software which may be found at alabe.com as you wish.